Logo of the TEE

Trans-Europ-Express ( TEE , often incorrectly referred to as Trans-Europa-Express ) was a type of train in international long-distance passenger rail transport that ran between the states of the EEC (European Economic Community) , Austria and Switzerland from 1957 to 1987 . Trains of this standard had to be reserved and only carried the first carriage class ; a surcharge was also required. International business travelers also had a so-called train secretariatto disposal. The Trans Europ Express was replaced by the EuroCity . Deutsche Bahn holds the trademark rights for the name Trans-Europ-Express .

In 1954 the Trans-Europ-Express-Commission was founded with its seat in The Hague . This happened on a suggestion by Franciscus Querien den Hollander, the then President of the Nederlandse Spoorwegen (NS). Founding members were the state railways of Belgium ( NMBS / SNCB ), the Netherlands ( NS ), the Federal Republic of Germany ( DB ), France ( SNCF ), Italy ( FS ), Luxembourg ( CFL ) and Switzerland ( SBB ). The Spanish State Railways ( RENFE ) only joined later. The development of common trains was not yet in sight in view of national regulations and different power systems.

Common criteria for the vehicles were:

Since many international routes were not yet electrified and multi-system trains were not yet fully developed, only diesel multiple units were ordered in the first generation. In the 1950s, the routes only allowed speeds of up to 140 km / h.

On June 2, 1957, train operations began. Since the participating states could not agree on uniform trains, the state railways of France (SNCF) put their RGP1 ​​( SNCF X 2770 ), Italy (FS) the 442/448 , Germany (DB) the multiple units VT 08.5 and VT 11.5 and the The Netherlands (NS) and Switzerland (SBB) launched the joint development SBB RAm TEE / NS DE IV , their own modern diesel multiple units . The Belgian state railway NMBS / SNCB only provided later, the Luxembourg CFL no vehicles at all.

While the passengers in the French and Italian railcars were served with meals and drinks at the seat ( at the seat service ), the Swiss-Dutch and German trains had a dining car , the German VT 11.5 also had a bar car with a second dining room.

The advancing electrification, the increase in speeds and increasing numbers of passengers meant that the trains of the initial equipment did not have a long service life as TEE. The SNCF X 2770 were moved to domestic routes as early as 1965, the FS ALn 442/448 and DB 601 operated as TEE until 1972, the SBB / NS RAm until 1974.

In 1961 the first electric multiple unit of the SBB RAe TEE II series followed , which was suitable for the four power systems commonly used in the transport sector. In the same year, cross-border freight trains started as TEEM .

In order to be able to better adapt the trains to the number of passengers, the SNCF from 1963 and the DB from 1965 used fast, modern electric locomotives and particularly comfortable first-class cars in new TEE connections . The SNCF, SNCB and DB used multi-system locomotives for the connections between the Benelux countries, France and Germany . On the other hand , the locomotives were changed regularly, including in Emmerich am Rhein , Basel , Chiasso and on the Brenner Pass .

In 1971, almost all TEE trains in Germany were integrated into the two-hour cycle system of the then first-class InterCity trains.

In 1971 the TEE Bavaria derailed in Aitrang in the Allgäu . In this train accident 28 people died.

In 1979, many TEE in Germany were replaced by InterCity trains with two car classes.

In 1982 the Lufthansa Airport Express (LHA) was set up between Düsseldorf Airport and Frankfurt am Main Airport . It was also run internally as a TEE by the Deutsche Bundesbahn until the summer of 1987. Also in 1987, the EuroCity, a new European type of train for quality trains with first and second class, was introduced.

The last TEE ran between Zurich and Milan on September 24, 1988. From the following day he was also on the road as EuroCity and with new vehicle equipment. The five TEE sets were rebuilt.

In 1993, the only non-stop service between Brussels and Paris trains running Euro-city trains (using were INOX TEE cars ) used one last time under the name "TEE", but the first already with cars and second class. For the following summer schedule, however, the product "TEE" disappeared in France in favor of the TGV.

Up until 1999, the TGV connecting trains from Bern via Neuchâtel to Frasne were still served by revised SBB RAe TEE II compositions.

The color of the SBB RAe TEE II , which has been restored to its original color, has been operating for SBB Historic in charter and tourist traffic since 2003 .

In 2004 the restoration of a TEE train was carried out by Deutsche Bahn. The estimated cost of three million euros should be ensured by 90 to 100 trips per year.

Since 2007, a set of TEE cars including a viewing car with two DB class 103 locomotives has been operating for the Nuremberg Transport Museum under the product name TEE Rheingold in charter and tourist traffic .

In September 2020, the German Federal Ministry of Transport and Digital Infrastructure presented a concept "TransEuropExpress (TEE) 2.0 - Cross-border high-speed and night rail traffic for climate protection". The concept envisages a new TEE network with high-speed trains over long distances through several countries. Deutsche Bahn points out that there are already several cross-border connections. Given the presentation, some observers rate it as unlikely that the TEE 2.0 could really compete with the aircraft. In the case of European connections, for example, there is only one pair of trains per day and not a train system with a tight frequency.

From 1965 on, electric locomotives of the  E 03 and E 10.12 series were used; The latter locomotives were a special version of the E 10 series, the maximum speed of which had been increased to 160 km / h for TEE traffic. First the sets of the Rheingold and Rheinpfeil , which had been in service since 1962, were repainted in the TEE colors, and later similar vehicles were procured for the other TEE trains. The trains consisted of air-conditioned compartment cars and first class open seating cars, a dining car and, in many cases, a viewing car or bar car .

From the 1970s onwards, upgraded lines made it possible to travel at speeds of up to 200 km / h for the trains hauled by the 103 series. The wagons were retrofitted with anti-roll dampers and magnetic rail brakes , steam heaters and axle generators could be removed because the wagons were now supplied with energy via the train busbar . 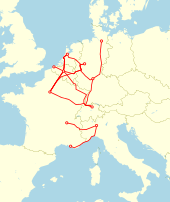 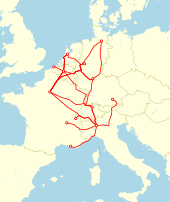 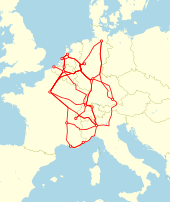 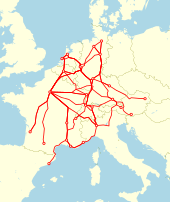 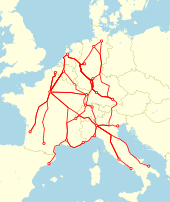 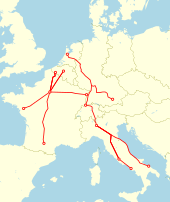 Status: train numbers and route at the time the train was discontinued