This article deals with the long-distance train between Paris and Amsterdam used from 1927 to 1995, for the opera of the same name by the composer Giacomo Meyerbeer see L'étoile du nord , for the story by Georges Simenon see “Étoile du Nord” - Star of the North . 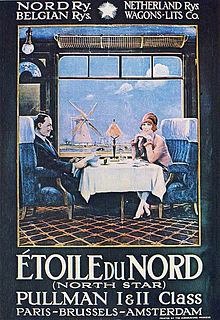 Advertising poster for the Étoile du Nord from 1927

The Étoile du Nord was a long-distance train that ran between Paris and Amsterdam from 1927 to 1995 . Only during the Second World War did the train not run. From 1927 to 1939 it operated as the Pullman Express of the Compagnie Internationale des Wagons-Lits (CIWL), from 1946 as a normal express train and from 1957 as the Trans Europ Express . From 1984 to 1987 he drove as Intercity and until he was hired in 1995 as Eurocity . 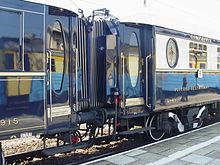 Car 4110 of the CIWL, the car belonging to the "Étoile du Nord" type has been used as a dining car on the Venice Simplon-Orient-Express since the early 1980s .

Due to the good experience with pullman suits in Great Britain , the CIWL began in 1925 with the establishment of a network of pullman suits also on the European mainland. After the Flèche d'Or, introduced in 1926 between Paris and Calais , had proven to be an economic success, the CIWL, in coordination with the French Chemin de Fer du Nord , the National Society of Belgian Railways and the Nederlandse Spoorwegen, also ran the heavily frequented connection from Paris via Brussels and Antwerp to Amsterdam a Pullman Express. It was named according to the outbound direction of Paris after as North Star designated Polarstern .

For the first time, the CIWL also used Pullman cars of the second class at the time in this luxury train . The trains introduced earlier were equipped exclusively with first class cars. For the first class, the CIWL used vehicles from the vehicle series that had been procured up to then, for the Étoile du Nord and other planned Pullman trains it procured 40 of the new, exclusively second-class wagons from the British Birmingham Railway Carriage and Wagon Company at the beginning of 1927. Étoile du Nord ”. In accordance with the principle of the Pullman car with at-the-seat service without a separate dining car, half of the cars were equipped with a kitchen. One car with and one without a kitchen were used together as a so-called coupling position.

The Étoile du Nord completed its first voyage on May 5, 1927, although the inaugural voyage took an approximately three-hour break in Brussels. During this time, the Belgian State Railways gave the guests of honor a reception. The planned service did not begin until May 15th. The train runs in Paris and Amsterdam began in the late morning and reached their destination in the early evening. The train was initially composed of a first-class coupling position and two second-class coupling positions, with a baggage car at the beginning and end of the train . Due to the high demand, an additional coupling position for the first class had to be added very soon. The Étoile du Nord thus consisted of a total of 10 cars and was one of the longest Pullman trains. Due to the high demand, especially on the southern section, the CIWL introduced the Oiseau Bleu as the second Pullman suit with the Paris - Brussels - Antwerp route from May 1929 . The CIWL advertised its Pullman suits with considerable effort, including posters by the well-known poster artist Cassandre .

Even before the Second World War, the Étoile du Nord drove without a scheduled stop between Paris Gare du Nord and Brussels Midi . For the first time, an international long-distance train no longer required stops at border stations. The passport and customs control took place in the moving train, the luggage was cleared before departure and after arrival. Until the outbreak of war, the Étoile du Nord and the Oiseau Bleu remained an exception within the European railway network. It was also one of the fastest European trains of its time due to the time it saves. The journey time was around seven to eight hours.

When the Second World War broke out, the Étoile du Nord was last used on September 3, 1939 and, like all other pullman suits, was discontinued.

After the war, the Étoile du Nord came back into operation in 1946 . However, it no longer ran as a Pullman Express, but as a normal express train. In addition to normal first and second class seating cars and a dining car , he also ran a mixed combination of Pullman cars from both classes. 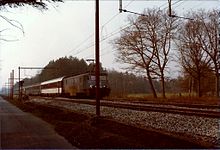 The TEE "Étoile du Nord" 1979 near Amsterdam, hauled by an electric locomotive of the SNCB series 15

With the introduction of the TEE network on June 2, 1957, the Étoile du Nord also became part of this network. However, its timetable changed. Whereas the train had previously started in the morning or in the morning, the TEE now drove in the morning from Amsterdam to Paris, where it arrived in the early afternoon. In the late afternoon we went back to Amsterdam, arriving there in the late evening. In the previous timetable, a normal express train with no name remained, which also carried a Pullman car until 1963.

The Dutch-Swiss RAm / DE IV diesel multiple unit was initially used . Compared to the travel time of its steam-covered predecessor, the TEE was able to be significantly accelerated and achieved a travel time of around five and a half hours. However, this was too small for the popular route and often overcrowded. Due to the numerous complaints from passengers, the Étoile du Nord received a relief train between Paris and Brussels under the same name just a few months later on March 1, 1958, which ran a few minutes before the regular train. Since no further RAm / DE IV were available, the French SNCF provided a TEE railcar of the type X 2700 / RGP 825 for this service.

Since the lines between Paris, Brussels and Amsterdam were now fully electrified, the railways involved switched the Étoile du Nord to a locomotive-hauled wagon train in 1964. The new type PBA Inox wagons (the abbreviation stood for Paris-Brussels-Amsterdam) were specially procured for the route and were pulled by the likewise new electric locomotives of the SNCF CC 40100 series , which are multi-system locomotives suitable for the three different power systems on the route were. Locomotives of the NMBS / SNCB class 15 were also used occasionally . This reduced the travel time to five hours. From the 1974/75 winter timetable, Mistral 69 cars were also used, which significantly improved the level of comfort. Several first-class open seating cars with tables served as the dining car.

The Étoile du Nord has always been in high demand. In the course of the gradual discontinuation of the TEE trains, the railways involved decided to offer this train with both car classes. With the end of the winter timetable 1983/84 on June 1, 1984, the Étoile du Nord therefore became a two-class Intercity. In addition, several open-plan cars were given more dense 2 + 2 seating regardless of the window division, and the places in the generator cars were released for second class without conversion.

With the addition of second-class cars, the Étoile du Nord drove its route largely unchanged. In 1987 the train type changed again and the train became part of the Eurocity network. The train finally operated as Eurocity until 1996 and was then discontinued in the course of the introduction of Thalys .