Bussigny lies at 415  m above sea level. M. , 7 km northwest of the canton capital Lausanne (linear distance). The urban agglomeration of Lausanne extends on a south-sloping slope east of the Venoge valley , in the Vaud Central Plateau .

The 4.8 km² municipal area covers a section of the Vaud Central Plateau in the Lake Geneva region. The communal soil extends on the slopes of Bussigny, bordered on the west by the Venoge valley and on the east by that of Sorge . In the north-west of the area on the edge of the Veno Valley is the Grand Sève forest . The highest point of Bussigny-près-Lausanne is 495  m above sea level. M. on the Sumont hill north of the municipality. In 1997, 45% of the municipal area was in settlements, 20% in forests and woodlands, 34% in agriculture and a little less than 1% was unproductive land.

With 8,736 inhabitants (as of December 31, 2018), Bussigny-près-Lausanne is one of the larger municipalities in the canton of Vaud. 84.1% of the residents are French-speaking, 4.5% Italian-speaking and 3.6% German-speaking (as of 2000). The population of Bussigny-près-Lausanne increased slowly but continuously until 1950. Since then, the population has grown rapidly, almost fivefold within 50 years. Particularly high growth rates were recorded during the 1960s and 1980s.

Bussigny was predominantly an agricultural village until the end of the 19th century . From the middle of the 19th century, the place experienced an economic boom thanks to its location on the Yverdon - Morges railway line opened in 1855 . At that time the first industrial zone was created, which included the Barraud brickworks, which was in operation from 1859 to 1970. In the course of the 20th century Scheuchzer SA, which specializes in machines for track systems, Jallut SA (paints and varnishes) and Getaz-Romang SA settled here. Due to the optimal transport connections, various distribution centers and warehouses were added in the last few decades, as well as the Edipresse central print shop in 1991. The commercial and industrial zones have now seamlessly merged with those of the neighboring communities of Crissier, Ecublens and Echandens. Agriculture (mainly arable farming ) has only a marginal importance in the employment structure of the population today.

Bussigny-près-Lausanne has developed into a residential community over the past few decades. Many workers are commuters who work mainly in Lausanne. 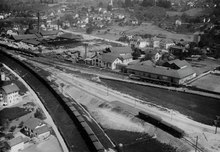 The community has excellent transport links. It is located at a crossroads on the main roads from Morges to Echallens and from Bussigny to Lausanne . The Lausanne-Crissier motorway junction on the A1 (Geneva – Lausanne – Bern) is around 1 km from the town center. To the northeast of Bussigny-près-Lausanne is the Villars-Sainte-Croix junction of the A1 and A9 (Lausanne-Sion) motorways, and the Ecublens junction of the A1 and A1A motorways to the south-east of the town (western approach to Lausanne).

The Bussigny-Yverdon railway line was inaugurated on May 7, 1855, and the Bussigny-Morges section on July 1, 1855. At that time there was a hairpin in Bussigny-près-Lausanne. Today the traffic triangle of the railway lines Lausanne – Geneva, Lausanne – Yverdon and Geneva – Morges – Yverdon lies in the municipal area.

A bronze necklace was found in the municipality of Bussigny, dating from around 400 BC. The place was probably also inhabited in Roman times . The first documentary mention was made in 1358 under the name Bussignye . The place name goes back to the Gallo-Roman personal name Bussenius .

In the Middle Ages , Bussigny and the hamlet of Saint-Germain formed a lordship that was subordinate to the Bishop of Lausanne. The rulership was made up of numerous small fiefdoms. With the conquest of Vaud by Bern in 1536, Bussigny came under the administration of the Bailiwick of Lausanne . After the collapse of the Ancien Régime , the village belonged to the canton of Léman from 1798 to 1803 during the Helvetic Republic, which then became part of the canton of Vaud when the mediation constitution came into force . In 1798 it was assigned to the Morges district. Bussigny has had its own municipal parliament since 1849.

The parish church of Saint-Germain has been attested since 1228. In 1675 the first church was built at the current location, which was replaced by a new building from 1856–58. The Saint-Pierre Catholic Church was built in 1969. The writer Isabelle de Montolieu lived in the Villa Montolieu . In the small old town center, characteristic farmhouses from the 18th and 19th centuries have been preserved.