Renens is a municipality in the district of Ouest lausannois in the canton of Vaud in Switzerland .

Renens lies at 415  m above sea level. M. , 4 km northwest of the canton capital Lausanne (air line). The agglomeration community of Lausanne extends in a hollow to the east of the Mèbre valley and on the adjacent slopes north of Lake Geneva in the Vaud Central Plateau .

The area of ​​the 3.0 km² municipal area covers a section of the Vaud Central Plateau north of Lake Geneva. The community soil extends from the terrace at Malley northwards up the gently sloping slope of Renens to below Jouxtens-Mézery. Here is at 470  m above sea level. M. reached the highest point of Renens. The western boundary forms the valley of the Mèbre , a side stream of the Chamberonne . Much of the stream in the Renens area is covered. In 1997, 93% of the municipal area was accounted for by settlements, 3% for forests and woodlands and 4% for agriculture.

With 20,927 inhabitants (as of December 31, 2018) Renens is one of the largest communes in the canton of Vaud and the most populous urban agglomeration of Lausanne. Of the residents, 73.8% are French-speaking, 6.6% Italian-speaking and 4.4% Portuguese-speaking (as of 2000). The population of Renens has risen sharply since 1900, the largest increase with almost 12,000 inhabitants was observed between 1950 and 1970. Due to the economic crisis in the 1970s combined with the emigration of foreign workers, the population decreased by almost 500 people in the following decade. Since then, the population has been increasing slowly but continuously. The proportion of foreigners at Renens in 2002 was 53%. Almost the entire area of ​​the community is built over today, the community only has small land reserves. The residential area of ​​Renens has seamlessly merged with those of Lausanne, Prilly and all other neighboring communities.

The distribution of seats in the 2016 elections was as follows:

Elevated silo designed by Jean Tschumi , the railway systems in the foreground

Until the middle of the 19th century, Renens was a predominantly rural village. At that time, agriculture and viticulture were practiced on the slopes around the town center . Today there are no more vines in the municipality. The primary sector has hardly any significance in the employment structure of the population.

Due to its location on the Lausanne-Geneva railway line and on the city limits of Lausanne, Renens developed into an industrial community and thus an important economic center from the middle of the 19th century. Before 1830 there was only a forge and a wine press in the village. In 1832 the first larger company, a brick factory, was established, which was privatized in 1866 and has been working in Crissier since 1958. The first economic boom occurred after 1855 with the railway connection. In 1876 the Renens marshalling yard was put into operation, which was further expanded in 1890 and 1908. With the opening of the large Lausanne marshalling yard near Denges , that of Renens lost a lot of its importance.

With industrialization at the end of the 19th century and the beginning of the 20th century, numerous important companies settled down and many immigrants came to Renens. Important companies that have been based in Renens since the first half of the 20th century include Iril SA (knitwear), Kodak SA (photo laboratory), Imprimeries Réunies de Lausanne (IRL), the bookbindery Mayer et Soutter SA ( since 1918) and Tesa SA (manufacture of measuring instruments).

Today, the major branches of industry also include mechanical engineering , microtechnology and precision mechanics , the electrical and electronic industry, the textile and food industry and numerous smaller companies in various branches. Renens is the location of the distribution center of Coop Vaud-Chablais valaisan, a grain silo, a branch of the Swiss Bank Corporation and a branch of the Gilgen Logistics company .

Around 1950 a city center was built with a secondary school, a theater and a community library (since 1978). The sports center was inaugurated in 1969. In 1979 a theater was set up in the former gas factory.

The community has good transport connections. It is located on the main road from Lausanne to Bussigny-près-Lausanne . Renens can be easily reached through the motorway connections Lausanne-Crissier on the A1 (Geneva-Lausanne-Yverdon), Lausanne-Malley on the western Lausanne access road opened in 1964 and Lausanne-Blécherette on the A9 (Lausanne-Sion) opened in 1974 .

On July 1, 1855, the section Bussigny-près-Lausanne - Renens of the railway line from Yverdon to Lausanne and the Renens station were opened. At the same time, the line to Morges was inaugurated . The first tram line reached Renens from Lausanne in 1903. In 1964, tram traffic was replaced by trolleybuses. Today, the municipality is served by the Lausanne trolleybus and several bus routes of the Transports publics de la région Lausannoise , whose depot has also been in Renens since 1995. Since 1991 Renens has also been the terminus of Lausanne's Métro Ouest (metro line M1). 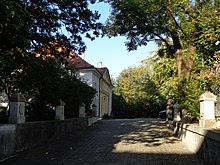 The place was first mentioned in a document as early as 896 as in villa Runingis . Later, the names Runens (1147), Runeins (1218) and Rugnens appeared from the 13th to the 16th century. The place name goes back to the Burgundian personal name Runo and means for the people of Runo .

Renens has been under the Lausanne cathedral chapter since the Middle Ages and formed its own benefice. Another part of the property belonged to the gentlemen who called themselves Ritter von Rugnens. With the conquest of Vaud by Bern in 1536, Renens came under the administration of the Lausanne Bailiwick . In 1553 Renens became its own rule, which was bought by the city of Lausanne in 1750. After the collapse of the Ancien Régime , the village belonged to the canton of Léman from 1798 to 1803 during the Helvetic Republic, which then became part of the canton of Vaud when the mediation constitution came into force . In 1798 it was assigned to the Lausanne district.

On June 12, 1940, shortly after Italy entered World War II , British planes that were supposed to bomb Italy and not neutral Switzerland accidentally dropped bombs on Renens and Geneva. Two people were killed in Renens. The tracks at Renens train station were also hit and damaged by several bombs. In 1920 and 1946 an incorporation into the city of Lausanne was up for discussion, but this was not pursued further. A merger of the municipalities of Renens, Chavannes-près-Renens, Crissier and Ecublens, which would have resulted in a densely populated and economically strong center west of Lausanne, was not well received by the residents. Renens was declared a town in 1960 when the 10,000-inhabitant limit was exceeded.

In Renens there are only a few witnesses from earlier times. The castle dates from the 18th century, and some mansions from the 18th and 19th centuries have been preserved. The new reformed parish church was consecrated in 1935; The Catholic Church of Saint-François dates from 1966. Today Renens consists largely of apartment blocks and commercial zones, on the slopes above the former town center there are a few single-family houses and villa quarters.