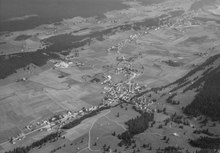 Le Brassus is a village in the Vallée de Joux , Canton of Vaud , Switzerland . It has been an autonomous district (fraction de commune) of the municipality of Le Chenit since 1908 and has its own municipal council (Conseil d'administration) . The Brassus stream flows through the village .

Le Brassus is the seat of the Audemars Piguet watch company . Since 1899 it has been connected to the Chemin de fer Pont-Brassus .

From the 16th century there was an ironworks and a blast furnace in Le Brassus; the pig iron smelting was discontinued at the end of the 18th century. 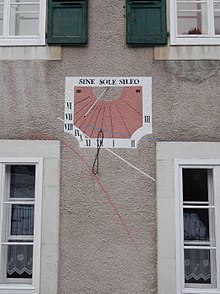 The Reformed Church was built between 1835 and 1837, the Catholic one at the end of the 19th century.

A sundial is attached to the house wall at 7 rue de la Gare. It not only shows the time, but also the equation of time .