Spiez [ 'ʃpiət͡s ] is a municipality in the Frutigen-Niedersimmental administrative district in the Swiss canton of Bern .

View of the Spiezer Bay 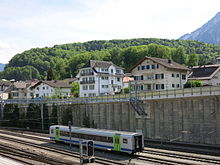 The place name probably goes back to Old High German spioz "Spiess" and would have originally referred to the mountain promontory or promontory on which the place is located (after Ernst Förstemann ). A return to the Celtic, as postulated by Johann Ulrich Hubschmied , is purely speculative.

The ridge was already populated in the early Bronze Age. In 1280 the place is attested as an imperial fief when King Rudolf I granted the town at the foot of the high medieval castle a weekly market. In 1308 Baron Johannes von Strättligen was enfeoffed with Spiez, who sold the castle, town, church set and several surrounding villages in 1338 to Johann II von Bubenberg , mayor of Bern . After the Bubenbergs died out, the Freiherrschaft Spiez came to the von Diesbach in 1506 and to the von Erlach in 1516 , under whose rule it was until 1798.

From 1856, Spiez developed into a climatic health resort , and tourism is still an important industry today .

The community consists of five so-called farmers : Spiez, Einigen , Hondrich , Faulensee and Spiezwiler (formerly Wyler ). Each of these sub-communities was responsible for the cooperative use of the common land , planting land, vineyards and forests belonging to the farmers . Every farmer also had to provide and maintain a classroom or schoolhouse. In the course of the 20th century, the tasks of the farmers were transferred to the municipality ( political municipality ) of Spiez.

In 1977 the municipal assembly was replaced by the large municipal council with 36 members. The graphic on the left shows the distribution of seats in the Grand Municipal Council after the elections on November 6, 2016.

The executive consists of 7 members. The mayor is Jolanda Brunner (as of 2016).

The main attraction is Spiez Castle with representative rooms from the 13th to 18th centuries. The extensive castle park and the 1000-year-old early Romanesque castle church also attract many tourists.

The viticulture and local history museum is housed in a typical Simmental house from 1728. There is a representation of a rural household, a complete cooper's workshop, "Trüel" with grape press and an exhibition on the work in the vineyard and in the cellar.

The Hotel Belvédère in Spiez was home to the German national team during the 1954 World Cup . The spirit of Spiez that arose among the players there is seen as an important factor in winning the World Cup.

Spiez has one of the highest vineyards north of the Alps, where "Spiezer wine" is produced.

The cultural offer is supplemented with numerous cultural events throughout the year.

The church of the parish of Brother Klaus , consecrated in 1974, is a unique multi-purpose church that has been a listed building since 1994; Justus Dahinden is the architect .

The Spiez Laboratory is located in Spiez , the internationally recognized Swiss specialist body for the protection of the population from nuclear, biological and chemical threats and dangers.

Political communities in the administrative district of Frutigen-Niedersimmental