Croy is a municipality in the Jura-Nord vaudois district in the canton of Vaud in Switzerland .

Croy lies at 642  m above sea level. M. , 5 km southwest of Orbe and 16 km southwest of the district capital Yverdon-les-Bains (linear distance). The picturesque little town is only one kilometer away from Romainmôtier , which is world-famous for its abbey church. The cluster village extends in a valley widening of the Nozon at the Jura foot .

The area of ​​the 4.5 km² large municipal area includes a section at the southern foot of the Jura. The south-western part of the municipality is traversed by the Nozon, which forms a 500 m wide valley near Croy. Around 1 km south of the village, below the Cascade du Dard waterfall, a narrow canyon-like valley begins , which in the west extends from the Gottettes forest heights (at 725  m above sea level, the highest point of Croy) and Bec à l'Aigle ( 629  m above sea level) . ), to the east by the Grand Chaney ( 656  m above sea level ). To the east, the parish extends over the ridge of the Chaney to the Jura foot plateau, which gradually slopes down towards the Orbe plain . A small exclave of the municipality is located south of the village on the wooded Jura slope. In 1997, 5% of the municipal area was accounted for by settlements, 48% for forests and trees and 47% for agriculture.

Croy was a predominantly agricultural village until the 20th century . Even today, the have farming and fruit growing an important role in the employment structure of the population.

Mills, saws and iron hammers have been powered by the water power of the Nozon since the 16th century. In the 19th century, Jurassic limestone was mined in the Chaney quarry for the production of well troughs. Today there are some jobs in local small businesses and in the service sector. Croy is the seat of the Grands Moulins de Croy. In Croy there is the well-known restaurant "Le Gaulois" with excellent, but not cheap, cuisine. In the last few decades the village has also developed into a residential community. Many workers are therefore commuters who work mainly in the Orbe and Yverdon-les-Bains area, but also in Lausanne . 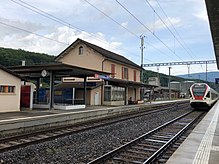 The community has good transport connections. It is located at the intersection of the road from Orbe to Romainmôtier and the main road 9 from Lausanne to Vallorbe . On July 1, 1870, the Cossonay - Vallorbe railway line went into operation. At the Croy-Romainmôtier train station, trains stop every hour in the direction of Vallorbe or Lausanne. Postbus courses to L'Isle , via Romainmôtier to Vaulion and Orbe ensure the fine distribution in public transport .

The municipality of Croy was inhabited very early. Remains of iron smelting furnaces from Roman times and the early Middle Ages have been found in the Bellaires forest west of the Nozon Valley . The place was first mentioned in 1498, already under its current name. The place name comes from the old French word croy for cross .

Since the Middle Ages , Croy has belonged to the Romainmôtier monastery. With the conquest of Vaud by Bern in 1536, the village became part of the Kastlanei and Landvogtei Romainmôtier. After the collapse of the Ancien Régime , Croy belonged to the canton of Léman from 1798 to 1803 during the Helvetic Republic, which then became part of the canton of Vaud when the mediation constitution came into force . In 1798 it was assigned to the Orbe district.

Croy used to own a small chapel, which was destroyed in 1536. The village always belonged to the parish Romainmôtier. It has a village wood oven in which all residents can bring dough to the ready-to-bake on certain dates. Freshly baked bread is sold there every Thursday afternoon (from 4:30 p.m.). In the town center there are some beautiful farmhouses from the 18th and 19th centuries.

The Cascade du Dard des Nozon waterfall is a natural attraction. It is on the path that runs along the Nozon from Croy to Romainmôtier .