This article deals with the place of Champvent; for other people and things called Champvent, see Champvent (disambiguation) .

Champvent is a municipality in the Jura-Nord vaudois district in the canton of Vaud in Switzerland . 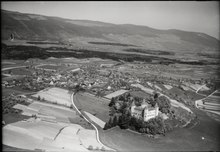 Champvent lies at 530  m above sea level. M. , 5 km west of the district capital Yverdon-les-Bains (beeline). The scattered village stretches along the edge of the Jura plateau, above the Talniederung the Bey and the Orbeebene , opposite the Mont de Chamblon , in northern Vaud Plateau .

Before the incorporation of Essert and Villars, the area of ​​the municipality, which was 6.9 km² in size, covers a section of the Jura foot plateau. The central part of the area is the Champvent plateau ( 547  m above sea level in Montilier ), which is bordered by the Brine valley to the north and the Bey valley to the south . To the south, the municipality extends over the Bey to the foot of the Mont de Chamblon, to the southwest into the valley of the Mujon . In the northwest, the lower slope of the Pipechat ridge belongs to Champvent. Here is at 590  m above sea level. M. reached the highest point of the municipality. In the northeast, across the Brine stream, there is the former Mornens exclave , which includes a cleared island and part of the surrounding forest area. Since the incorporation of Essert-sous-Champvent, the former exclave has been connected to the municipality. In 1997, 4 percent of the municipal area was in settlements, 25 percent in forests and woodlands, 70 percent in agriculture and a little less than 1 percent was unproductive land.

The farm settlements Grange Neuve ( 446  m above sea level ) in the valley of the Bey below the village and Saint-Christophe ( 545  m above sea level ) on the edge of the Jura foot plateau above the valley of the Mujon as well as some individual farms belong to Champvent January 2012 the former municipalities of Essert-sous-Champvent and Villars-sous-Champvent . The neighboring municipalities of Champvent are Suscévaz , Mathod , Rances , Baulmes , Vuiteboeuf , Orges , Valeyres-sous-Montagny , Montagny-près-Yverdon and Chamblon .

Until the second half of the 20th century, Champvent was a predominantly agricultural village. Even today, agriculture has an important role in the income structure of the population. There are several wine-growing areas on the southern slopes of the Jura foot plateau below the village . Further jobs are available in local small businesses and in the service sector. In recent decades, Champvent has developed into a residential community thanks to its attractive location. Numerous workers are therefore commuters who work mainly in Yverdon .

The community is located off the major thoroughfares, but is easily accessible from Yverdon . The Yverdon-Ouest motorway connections on the A5 (Yverdon-Grandson) opened in 1984 and Orbe on the A9 opened in 1989 are each around 5 km from the town center. A Postbus course connects Champvent with Essert-sous-Champvent station on the narrow-gauge line Yverdon- Sainte-Croix and thus connects to the public transport network.

Champvent formed a rule from the 11th century under the Lords of Grandson . Through an inheritance, Champvent came to a side branch of the lords of Grandson- La Sarraz in the 13th century . The new masters called themselves de Champvent from that time , and their rule was henceforth independent of the rule of Grandson. This stretched from the Orbe plain near Suscévaz northwards over the Jura foot plateau to Sainte-Croix . Shortly after 1300, La Mothe and in 1317 also Sainte-Croix with Bullet split off from the Champvent dominion. The settlement of the same name north of the castle was probably founded in the 13th century by the Lords of Champvent.

After the family of the Lords of Champvent died out, the rule came in 1336 to the Counts of Neuchâtel , in 1373 to Marguerite de Vufflens and after their marriage to the Burgundian family de Vergy. Because the lord of the castle had ties to Duke Charles the Bold , the confederates burned the castle down in 1475. After the conquest of Vaud by Bern in 1536, the Champvent lordship belonged to the Yverdon bailiff . From 1611 to 1731 the rule belonged to the von Diesbach family , after which Johann Rudolf Tillier became master of Champvent through marriage. The castle and property remained in the possession of the last owner family until they died out in 1940. After the collapse of the Ancien Régime , the village belonged to the canton of Léman from 1798 to 1803 during the Helvetic Republic , which then became part of the canton of Vaud when the mediation constitution came into force . In 1798 it was assigned to the Yverdon district. The hamlet of Saint-Christophe, which previously belonged to Mathod, was added to the commune of Champvent in 1811. With effect from January 1, 2012, the previously independent municipalities Essert-sous-Champvent and Villars-sous- Champvent were incorporated into Champvent.

The Notre-Dame parish church was rebuilt in 1693 on the site of a previous medieval building, the front tower dates from 1890 and the rectory from 1682. In the town center, some characteristic farm and wine-growing houses from the 17th to 19th centuries have been preserved.

The present castle, an excellent example of the Carré Savoyard (square floor plan), dates from the second half of the 13th century. It is located on a mountain spur south of the village, above the Orbe plain. Four round corner towers of unequal size flank the castle. The largest of these previously served as a keep, but was shortened by 15 meters in the 18th century and the height of the other three towers was adjusted. Otherwise, the castle largely retained its original shape. The Gothic castle chapel is also remarkable . Champvent Castle is still privately owned and is therefore not open to the public.