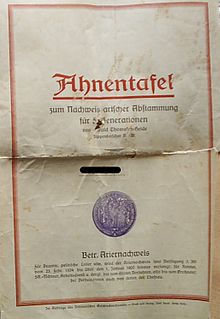 "Pedigree to prove Aryan descent for five generations", published on behalf of the Dithmarscher gender union

In National Socialist Germany from 1933 to 1945, the Aryan certificate was for certain groups of people (in particular members of the SS, civil servants, public service, doctors, lawyers, scientists at German universities ) a certificate (certified pedigree) of "purely Aryan descent " required by state and government authorities from the "Aryan national community ".

The exclusion of "non-Aryans", above all Jews , " Gypsies " began with the Aryan proof , who went through the denial of their civil rights and exclusion to expulsion , ghettoization , deportation and state-organized mass murder in concentration camps ( Holocaust and Porajmos ) (1941–1945) led. On the other hand, "an Englishman or a Swede, a French or a Czech, a Pole or an Italian ... was considered related, ie as Aryan".

Aryan certificates also required professional associations, the Reich Chamber of Culture for all artistic workers, as well as many companies and some churches as entry requirements for employment, and the NSDAP for admission as party members.

The 25-point program of the NSDAP of 1920 had already shown who the Nazis' racism would primarily be directed against : It required the expulsion of all Jews who had immigrated since 1914 and the withdrawal of civil rights for all German Jews. However, it did not define the terms “Aryans” and “Non-Aryans”, but excluded people who were not “of German blood ”.

The legal basis for the Aryan proof was Paragraph 3 (the so-called Aryan Paragraph ) in the " Law for the Restoration of the Professional Civil Service " of April 7, 1933. It was the first racist law in the German Reich since 1871, which at the same time made the impossibility and arbitrariness of a racial definition of " Jew ”or“ Non-Aryan ”proved. The first implementing ordinance of April 11, 1933 determined the following unclear:

In the absence of specific racial characteristics for Jews, the Jewish religion was used as a defining characteristic. Only those who could prove descent from non-Jewish grandparents were considered Aryan. The law ignored who the great-grandparents came from and what religion they belonged to. This led to absurd contradictions:

The choice of religion in the Third Reich determined racial affiliation, and the law increased the number of people defined as "Jews". For the proof of “Aryan” ancestry, neither a generation-long residence and affiliation to one of the peoples, especially Northern Europe, which were defined as “Aryan international community”, nor an appearance, character, behavior or performance attributed to the Aryans by racists was sufficient. The law itself thus proved the impossibility of making “race” an objective property and verifying it.

Its ideological basis was racial theories that representatives such as Arthur de Gobineau , Karl Eugen Dühring , Houston Stewart Chamberlain , Ernst Haeckel and others had formulated and propagated since around 1860. These had related the Aryan term for the language family of the Indo-Europeans , which originated from linguistics and which racial studies do not know, to an alleged Nordic race in order to gain a criterion for the discrimination , exclusion and expulsion of the Jewish minority from their own nationality (see history of anti-Semitism until 1945 ).

Aryan certificate (front and back) from 1943

The German churches had to participate in the review of these drafts, with Catholic dioceses and Protestant parishes providing the state authorities with information from their church registers from April 1933 , which went back to the 18th century. They gave the state authorities information on individual request; the church administrations had their own forms printed for this purpose. Individual pastors, especially those belonging to or closely related to German Christians , looked for Christians of Jewish descent from their baptismal and wedding registers and reported them to the authorities.

It is estimated that the Aryan paragraph in the summer of 1933 around two million members of the public administration, as well as tens of thousands of lawyers, students and members from numerous professions of culture and science such as editors (journalists) and applicants for membership in the NSDAP, SA or SS to look for evidence of their Aryan ancestry . An extensive bureaucracy arose.

In the case of unexplained family relationships - such as foundlings or illegitimate or out of wedlock births - and in all cases of doubt, the “ Reichsstelle für Kippenforschung ” in the Reich Ministry of the Interior decided on the individual case. University institutes often provided her with “hereditary and racial biology” reports. 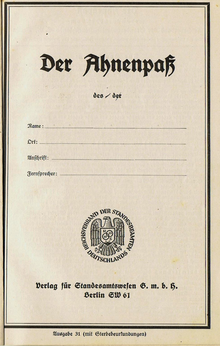 Ancestral passport: Proof of ancestry in the Third Reich 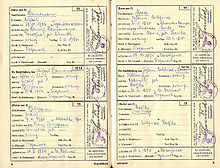 The “ Reichserbhofgesetz ” and the NSDAP required proof of “purely Aryan” descent - also for the spouse  - up to 1800, for applicants for the SS (from the rank of leader or leader candidate ) even back to 1750 (“great Aryan proof”). In this pedigree, all ancestors of the SS member or his wife or bride had to be listed by January 1, 1800 at the earliest, for ranks from SS leader upwards accordingly up to 1750. For each person listed, name, profession, religion and birth and birth Date of death must be entered. The person concerned had to take care of developing the pedigree himself. It was also asked to enclose the necessary birth, death and marriage certificates and to send them to the Race and Settlement Main Office.

Here, too, the churches participated. For example, the Evangelical Church in Berlin-Brandenburg created its own alphabetical baptismal registers for the period from 1800 to 1874 - until shortly after the founding of the Empire, after which state registry offices kept similar registers - and also kept special files for baptized Jews and " Gypsies ".

The legally required proof of parentage was a very effective instrument of the National Socialist racial policy. Those who could not provide it were stigmatized in almost all areas of society . With this, the Nazi regime began to deprive the population groups defined as “full”, “half” and “quarter Jews” or other “foreign races” of their civil rights guaranteed in the Weimar constitution , which is still formally valid . In most cases they were dismissed from their profession and were no longer allowed to practice it or only to a limited extent.

When the so-called Nuremberg Race Laws were passed in September 1935 , the Aryan certificate became important and commonplace for all citizens of the German Reich. The ordinances of the Reich Citizenship Law gradually deprived Jews of citizenship rights and made them second-class citizens. The law for the protection of German blood and German honor also prohibited marriages between Jewish and non-Jewish Germans.

The "Aryan records" now to be provided by millions of Germans led to an increase in genealogy and pseudo-scientific " clan research ", which only came to an end in 1945.

The legal exclusion of officially defined “non-Aryans” was constantly tightened and expanded through numerous subsequent laws and ordinances. Ultimately, the Aryan evidence could make the difference between life and death. From June 1941, the Jews, Sinti and Roma he had excluded were deported , ghettoized and finally murdered in the Holocaust and Porajmos.

Evidence of the Aryan family led to disputes even after 1945.

Archiving in the Federal Archives did not take place, as there was no central recording at the time of active use.

Since the Aryan certificate was an official document at the time of its creation through authentication, it is still recognized as evidence today.