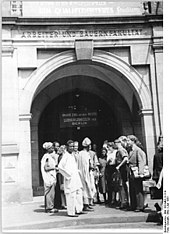 Students in front of the Workers and Farmers Faculty of the University of Leipzig , 1951 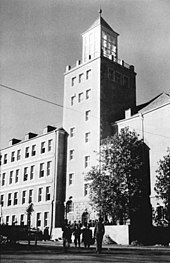 Worker and Farmer Faculties (ABF) were institutions at universities and colleges in the German Democratic Republic to prepare young workers and farmers and their children for university studies; they served to break the educational privilege. Children of employees and craftsmen also had limited access to higher education (Abitur). The ABF emerged in 1949 from the earlier to the universities of the Soviet occupation zone of Germany decorated preliminary study institutions .

The preliminary work regulations of the universities and colleges of the Soviet occupation zone of Germany of May 23, 1949 elevated the pre-study institutions founded in 1946, from which the pre-study departments later emerged, to the rank of faculties. With this step, the students in these institutions, known as the workers 'and farmers' faculties, were given the same formal status as the properly enrolled students at the universities. Ordinary students were declared to be those who, through a degree from the workers 'and farmers' faculty, were initially supposed to acquire the right to begin training at a college or university.

The lecturers in the workers 'and peasants' faculties were also legally equated with the lecturers in colleges and universities. Furthermore, the director of the workers and farmers faculty - like the deans of the faculties - received a seat and vote in the university senate. The head of the preparatory studies department was only granted this right in questions of working-class studies.

Workers studies in the GDR

In the winter semester of 1949/50, the universities in Berlin , Greifswald , Halle-Wittenberg , Jena , Leipzig and Rostock as well as the Dresden University of Technology , the Freiberg Mining Academy and the Brandenburg State University in Potsdam set up faculties for workers and farmers.

The duration of study at the ABF, i.e. H. The preparation time for the actual course took two to three years and ended with the acquisition of the Abitur.

In 1963 the ABF were dissolved with the exception of those in Halle (Saale) and Freiberg.

Much later (around 1983), preparatory courses were set up specifically for skilled workers at colleges and universities in the GDR, which offered skilled workers the opportunity to prepare directly for university studies without a high school diploma on the second educational path.

In Halle (Saale) there was also the special ABF II as a facility of the Martin Luther University . The Institute for Preparation for Study Abroad (IVA) taught delegated students from all over the GDR from 1954 to 1991. These were prepared in one- or two-year courses linguistically, technically, ideologically and in terms of geography for university studies in socialist countries abroad (especially in the Soviet Union ). For a time, they passed the Abitur alongside the usual subjects in the language of the future country of study. After the two workers and farmers faculties were amalgamated in Halle in 1966 to form the ABF Walter Ulbricht , the institution only served as preparation for studying abroad.

The home countries recognized the respective qualification in the host country (e.g. the diploma or master’s degree ).

From 1990 onwards, the foreign students from the GDR were assigned to the “ Bruno Leuschner ” Berlin School of Economics . Even before the political change, this university looked after foreign students in social issues as well as in the organization of so-called merit scholarships, which were paid once a year in GDR marks once a year, if approved. Upon application, the last GDR government and, after German reunification, also the respective responsible state ministry confirmed the recognition of the qualification.