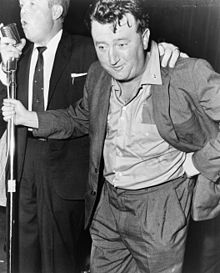 Brendan Francis Aidan Behan ( Irish Breandán Ó Beacháin ; born February 9, 1923 in Dublin , † March 20, 1964 there ) was one of the most important Irish playwrights and writers of the 20th century . Behan, who worked intermittently as a journalist, wrote in both English and Irish. In his youth he was an IRA activist .

Brendan Behan was the son of house painter and union activist Stephen Behan and his wife Kathleen Kearney. He had two older half-brothers, three younger brothers and a sister. When he was born, his father was in prison for activities in the banned IRA. The young Brendan grew up on the outskirts of a Dublin slum area - in an impoverished but very well-educated middle-class family. Its members were often involved in the Irish independence movement. Brendan Behan's uncle Peadar Kearney wrote the text of what would later become the Irish national anthem in 1907 . He himself was familiar with Irish literature from childhood .

Brendan Behan spent almost all of the years 1939 to 1947 behind bars. He left school at the age of 13, and at 16 he was recruited by the IRA to commit bomb attacks in England . However, he was caught before the planned crime was carried out in Liverpool and sentenced to three years in juvenile detention. He served two of them at Hollesley Bay Borstal, a model reformatory for youth in Suffolk . He later processed the time there in the autobiographical novel Borstal Boy .

Released to Dublin in 1941, he was arrested again in 1942 for involvement in the attempted murder of two police officers, first in Dublin's Mountjoy Prison , then in Arbor Hill, then in the notorious Curragh internment camp. The sentence was 14 years, but thanks to a general amnesty , Behan was released in 1946. He was later imprisoned several times for short periods, including a. because of help to escape, drunkenness and rioting. He later also worked on this time literarily in Confessions of an Irish Rebel (German: Confessions of an Irish Rebel ).

Behan later summarized his activities for the IRA self-critically as follows: “I am not a warrior. I am an absolute zero. The IRA had enough military expertise to do nothing but run errands. ”Behan felt that he belonged to the left wing of the underground organization and was an avowed socialist and practicing Catholic all his life.

After his release from prison, Behan initially worked as a house painter. But he had already started writing in Mountjoy Prison. His detention experiences should shape his entire work.

Behan's first play The Landlady and a few short stories were written while he was in prison. Some of these were published in the respected literary magazine The Bell , but otherwise Behan initially found little recognition in Dublin. After being briefly detained again in Manchester in 1947 , he was deported to France . Only in Paris did he turn, encouraged and a. by Samuel Beckett and Albert Camus , seriously writing too. He worked as a journalist, for example for the radio, and according to his own statements did not shrink from writing pornographic texts if they brought him a little money.

Since 1951 Behan lived again in Dublin, where he soon achieved local fame as a hard-drinking, sang-loving and wild talk swinging pub literary writer. In 1954 he wrote the play The Quare Fellow (known in Germany as The Joker or The Man of Tomorrow Morning ), which takes place in a prison during the night before an inmate is executed. The play premiered in 1955 at Dublin's Pike Theater and was a sensational success. The performance at the Theater Royal in Stratford in England the following year made Behan an internationally acclaimed playwright. The Quare Fellow was made into a film in 1962 . The song The old triangle in the piece , which The Dubliners later added to their repertoire, celebrates the night before a prisoner was executed in Mountjoy prison in Dublin. In the year of the premiere , Brendan Behan married the painter Beatrice ffrench Salkeld, daughter of the painter Cecil ffrench Salkeld .

1957 appeared Borstal Boy and the play The Hostage (Gaelic: An Giall ; German: Die Geisel ), which was an even bigger success than The Quare Fellow . The tragic comedy takes place in a brothel, where IRA men hold a British soldier hostage in order to free a comrade in arms sentenced to death. Behan brought the sympathetic portrayal of the soldier and the portrayal of the hostage takers as humorless fanatics from many IRA sympathizers.

Brendan Behan never learned to deal with success, he even scared him at times. A large part of the money he earned from his plays was invested in alcohol. He did not stop drinking even when, after 1956, he regularly had to take medication for diabetes .

His excessive lifestyle and the demands that were placed on him as a sought-after author barely let him get down to writing. His last works were made as tape recordings, such as Brendan Behan's Island , Brendan Behan's New York , Confessions of an Irish Rebel and the crime thriller The Scarperer (German: Der Spanner ), which appeared after his death . Likewise, his last, unfinished play, Richard's Cork Leg , was created, which is set in a cemetery but is an exuberantly joyous celebration of life.

Weakened by alcohol and drug consumption , Brendan Behan died in 1964 at the age of 41 in a Dublin hospital. The Irish daily Daily Express described Behan in an obituary as “too young to die but too drunk to live.” The IRA held an escort of honor at his funeral.

Brendan Behan is considered to be the innovator of English-language theater . His humor and his colloquial dialogues, repeatedly interrupted by snappy songs, were groundbreaking in his time. In Ireland he is particularly popular for his songs and for the revival of Gaelic as a literary language . In Germany, Brendan Behan became known, among other things, for the staging of his plays by Peter Zadek . Many of his works have been translated into German by Heinrich and Annemarie Böll .