Andreas Bernhard Lyonel Feininger (born December 27, 1906 in Paris , † February 18, 1999 in New York ) was an American-German photographer , teacher of photography and architect in the 20th century. He is the son of the artist Julia Berg and the painter Lyonel Feininger .

Andreas Feininger was born as an American citizen in Paris in 1906, spent his youth in Berlin and from 1919 in Weimar and Dessau , where his father Lyonel Feininger taught at the Bauhaus University. His mother was the artist Julia Berg, née Lilienfeld (1881–1970), who came from a Jewish family. His brothers are Laurence and Theodor Lukas , his half-sisters Leonore and Marianne (1902–1999). Andreas Feininger completed an apprenticeship as a cabinet maker at the Bauhaus and then studied architecture at the building school in Zerbst .

In 1929 he exhibited his photographs in the legendary exhibition Film und Foto (FiFo) in Stuttgart. As a finished architect, he worked in Hamburg from 1929 to 1931, as a draftsman in the architecture office of the Karstadt department store chain .

Feininger lost his work permit in 1932 and went to Paris. For almost a year he worked for the well-known architect Le Corbusier . As he did not get a work permit in France during these years either, he emigrated to Stockholm in 1933 with his Swedish friend Wysse Hägg , whom he met at the Bauhaus, where they both married and their son Tomas was born in 1935.

In Stockholm, Andreas Feininger actually wanted to work as an architect, but he quickly established himself as a sought-after architectural photographer and meanwhile also as a photo-technical expert in the laboratory. He built his own cameras with telescopes and a magnifying device with innovative mechanics, which the Liesegang company later produced on an industrial scale. With the outbreak of the Second World War, he emigrated with his family to America in New York in 1939, where he also met his parents again.

Andreas Feininger initially earned his living as a freelance photo reporter and photographer. From 1943 to 1962 he was a permanent editorial photographer at LIFE magazine and later again a freelance photographer and widely read author. In 1955 he was also invited to take part in the epoch-making exhibition The Family of Man at the Museum of Modern Art in New York.

He gained international recognition with his photography. Andreas Feininger died on February 18, 1999 at the age of 92 in New York. His pictures are classics in the history of photography. 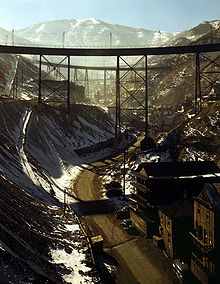 Feininger's photo of Carr Fork Canyon for US authorities, 1942

Feininger's most famous photos were taken using view cameras with telephoto lenses with a very long focal length , some of which Feininger built himself. In this way he was able to keep a large distance from his motifs and depict the actual proportions. He succeeded in doing this in an impressive way, and many of his photos, especially of his new hometown New York City, became world famous. Another focus was his well-composed macro shots of natural details. For him, the most important prerequisite for good photos was the photographer's genuine interest in his subject.

"The fact that a technically flawed photograph (in the conventional sense) can be emotionally more effective than a technically flawless image will shock those who are naive enough to believe that technical perfection is the true value of a photo."