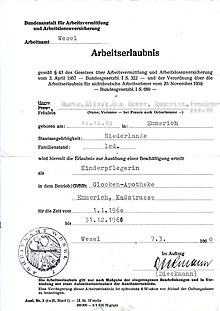 Work permit for a person from the Netherlands, issued Wesel Employment Office, 1960

A work permit is an entry in the residence title that allows a foreigner to pursue a professional activity in Germany. Today there is no longer a formally independent work permit, as this was abolished by the Immigration Act, but it is still often referred to as such. It used to be a permit issued by the Federal Employment Agency to foreigners to be allowed to pursue gainful employment in the federal territory (from 1998 Section 284 SGB III in the version valid until December 31, 2004). On January 1, 2005, they were replaced by the residence permit, in which the authorization to pursue a paid activity is entered. The residence permit is an administrative act issued by the immigration authorities. Insofar as it contains stipulations about the exercise of an employment, it generally requires the approval of the Federal Employment Agency ( Section 39 of the Residence Act [AufenthG]).

Work permits are regularly available for a transitional period as EU work permits ( Section 284 SGB ​​III in the version applicable from January 1, 2005) for Union citizens from the youngest accession states and for their family members. The background to this is that the free movement of workers under European law for citizens of such states is only being established gradually. Such permits are not currently granted. After the abolition of the labor market restrictions for Croatian nationals on July 1, 2015, the regulation is ineffective.

Work permit according to German law

In national German law , the right to exercise paid activities is protected by the basic right to freedom of occupation ( Article 12 of the Basic Law). This basic right only applies to Germans and Union citizens. Non-EU foreigners require a permit that is issued in accordance with the relevant provisions of the law on foreigners and has been part of the residence permit since the Residence Act came into force.

The right to work

In place of the Employment Agency , since January 1, 2005, the immigration authority has been responsible for approving employment for a fee. The Employment Agency is only involved in an internal approval procedure to the extent required by law and the related ordinances. The permission to work is entered in the residence permit ( Section 4 subs. 2 AufenthG).

In contrast to the earlier Aliens Act, the Residence Act differentiates more between self-employed and employed activities. § 10 AuslG still spoke of "gainful employment" and meant the taking up of an employment relationship. The self-employed activities were not mentioned in the AuslG and could only be permitted within the framework of another residence permit according to § 7 AuslG. With the entry into force of the Residence Act, a change in meaning has taken place: The law now defines gainful employment as self-employed as an entrepreneur and as an employee in an employment relationship ( Section 2, Subsection 2, AufenthG). Employment is now called employment and is legally defined in Section 7 SGB ​​IV. The two terms must be kept strictly apart: For example, students may work a maximum of 120 full days or 240 half days per year and take part in student jobs ; In contrast, they are not allowed to be self-employed ( Section 16 subs. 3 AufenthG).

Family members who have joined foreigners are entitled to gainful employment, provided that the foreigner to whom the family reunification takes place is entitled to pursue gainful employment ( Section 27, Subsection 5, Residence Act). Unlike before, you will immediately have the right to unrestricted access to employment and, if necessary, access to self-employment if the partner who is already living here has these rights.

The employment ordinance (BeschV) regulates the admission as an employee of newly arriving foreigners to the country and to exercise an employment (§ § 18 , § 19 AufenthG ). As a rule, the permit is only granted for the activities named in the Employment Ordinance (e.g. au pair; specialty chefs; scientists at public institutions; journalists)

The BeschV also regulates the requirements for foreign students with a residence permit for the purpose of studying who wish to stay and work in Germany after completing their studies. After completing your studies, you may search for a job appropriate to your degree for up to 18 months ( Section 16 subs. 4 AufenthG). According to Section 27 of the Employment Ordinance, the priority check is no longer applicable (from October 2007 to December 2008 this was regulated by the university graduate access ordinance HSchulAbsZugV, since January 2009 the Employment Regulation). The employment agency only checks whether the activity and remuneration correspond to the qualification. When looking for a job after graduation (max. 18 months), just like during studies, it is possible to work without a work permit for up to 90 days / 180 half days per year ( Section 16 subs. 4 sentence 2 AufenthG).

Since January 2009, the aforementioned regulation of § 27 Employment Ordinance applies to all foreigners with a German university degree, even if they have already left Germany after completing their studies and have been living abroad for some time. If necessary, they will receive a visa and a residence permit for employment purposes if they can prove a binding job offer appropriate to their degree.

Since August 6, 2019, the taking up of employment by a person with a Duldung or residence permit is no longer subject to a priority check.

The following parts of this article appear since 2013 is out of date to be : Employment Procedure Ordinance, there is obviously no longer the legal bases have to be adjusted, or the only previously applicable regulations shall be marked accordingly in this section (past tense).
Please help to research and insert the missing information .

Here is an example: A foreigner finds a job with an employer. However, he is not allowed to start yet; he must first apply for a work permit at the immigration authorities. The immigration authorities pass the process on to the employment agency, which first checks whether the foreigner should not be employed under less favorable working conditions than comparable German employees, which means in particular that he or she must be paid at least the customary local wage (even if no collective wage). To do this, the employer must provide the employment agency with information about pay, working hours and other working conditions ( Section 39 subs. 2 sentence 3 of the Residence Act).

The employment agency then carries out a priority check ( Section 39 subsection 2 sentence 1 number 1 of the Residence Act). It asks the employer to place a “placement order” and sends him “privileged” unemployed people (Germans, foreigners with unlimited permission to work) for up to six weeks. These unemployed people have to apply for the job and, if necessary, introduce themselves in order to avoid possible sanctions (blocking period, cuts in basic security for job seekers, etc.). If the employer can well justify that there was no suitable applicant among them, that is to say that privileged employees are “not available” ( Section 39 (2) No. 1 of the Residence Act), the priority test is deemed to have been passed. The employment agency then gives the “approval” for the work permit and sends the process to the immigration authorities. Then the immigration authorities can issue a work permit for the job found and the foreigner can start work.

However, the immigration authorities must also involve the employment agency in these cases, with the exception of the qualified activities according to § 2 BeschVerfV, in order to obtain their "approval" for the work permit. In deviation from Section 39 (2), first sentence, no. 1 AufenthG, consent must then be given without a labor market test and without a test of the working conditions. So it doesn't matter whether privileged applicants are available and whether the foreigner receives adequate remuneration.

The consent and thus also the work permit must be specified in the above Cases of four-year residence in Germany as well as for people who entered the country as young people are granted indefinitely and without restriction to a specific professional activity, a specific employer, a specific region or specific working hours ( Section 8 sentence 2, Section 9 subsection 4 in connection with § 13 BeschVerfV).

With regard to the priority check, there are exceptions in shortage occupations ( “positive list” of shortage occupations according to Section 6 (2) sentence 1 No. 2 Employment Ordinance ) and for highly qualified persons ( Section 3 Employment Ordinance). In addition, the Federal Employment Agency will waive the priority check for asylum seekers and tolerated persons with good prospects of staying in certain regions for three years after the Integration Act comes into force .

Asylum seekers are not allowed to work at all for the first three (previously: 12) months ( Section 61 (2) AsylG), afterwards a subordinate labor market access according to the BeschVerfV applies for up to 15 months (see above). Even foreigners with a Duldung are not allowed to work for the first three (previously: 12) months ( Section 10 BeschVerfV). Subordinate access to the labor market according to the BeschVerfV then applies to both asylum seekers and foreigners who have been tolerated (see priority check above); however, the priority test is not applicable for certain skilled workers and persons with a university education and is generally not applicable after a domestic stay of 15 months. According to Section 11 BeschVerfV, a further work ban is permissible if the foreigner can be shown to have entered the country in order to live on social welfare, or if his behavior prevents his otherwise permissible and possible deportation (e.g. failure to participate in obtaining a passport ).

Citizens of the EU and other EEA countries (Iceland, Liechtenstein, Norway) including their family members - including those with third country citizenship (citizenship of a non-EEA country) - have unrestricted access to employment and self-employment. You do not need permission for this. Your third-country family members are entitled to a residence card ( Section 5 (2) FreizügG / EU). Both serve as proof of the right of residence and the right to take up paid work.

The transitional regulation in Section 105, Paragraph 1 of the Residence Act makes it clear that a work permit issued under the old law remains in place until it expires. Since a residence permit was also required up to December 31, 2004 and this also continues to apply ( Section 101, Paragraph 2 of the Residence Act), nothing will initially change in the current situation. If the renewal of the residence permit is necessary because it has expired, but the old work permit is still valid, it is considered as approval from the Federal Employment Agency for the remaining period of validity. The requirements contained in the old work permit must be transferred to the new residence permit by the immigration authorities. Due to the passage of time, this transitional regulation is now largely irrelevant.

The (unlimited) work permit under old law expired as such on December 31, 2004 ( Section 105 (2) of the Residence Act). Since then it has only been valid as the unrestricted approval of the Federal Employment Agency to take up employment. Since January 1, 2005, the person concerned has required a residence permit that expressly permits employment if he does not already have one.

Since the basis of employment under immigration law since January 1, 2005 is solely the residence permit, the immigration authorities must be called upon in the event of a dispute. This also applies if the issuance of the residence title fails due to the lack of consent ( Section 39 of the Residence Act) from the Federal Employment Agency. In this case, the Federal Employment Agency must be included in the proceedings before the administrative court ( Section 65 VwGO). The social court does not have jurisdiction. In contrast to the social court, the procedure before the administrative court is chargeable, which is why legal aid may have to be applied for.

In principle, it is also possible to enforce an employment permit in the context of temporary legal protection (by way of an interim order according to Section 123 VwGO), but in practice it is seldom because the person concerned often has no right to an order (right to be admitted to a very specific employment), and even more so cannot assert any reason for ordering (urgency). Because urgency presupposes the occurrence of irreparable damage if the interim order were not issued. The mere non-admission to the labor market is generally not enough.