Residence permit ( English residence permit , Spanish permiso de residencia , Italian permesso di soggiorno , French titre de séjour , Dutch verbal title ) is a legal term from the asylum and immigration law of the European Union . In some official languages ​​(e.g. English, Spanish and Italian) the term title is described as “permission”. The term essentially refers to residence documents that are issued to third-country nationals for a stay in one of the Member States. In principle, residence documents for Union and EEA citizens and Swiss citizens who are entitled to free movement are not referred to as residence permits ; these have been given different names ( registration certificate and certificate of permanent residence , residence card and permanent residence card as well as residence permit CH ).

In the national legal systems of the member states, the term residence permit sometimes has a different meaning (→ following country-specific sections).

The concept of the residence permit appears for the first time in Article 63 No. 3 Letter a) of the Treaty establishing the European Community (EC Treaty) as amended by the Treaty of Amsterdam . With it, the European Union is gradually establishing an area of ​​freedom, security and justice and initially authorizes the Council to adopt immigration policy measures and to determine entry and residence requirements for this purpose. In the Treaty of Lisbon, those powers have been extended. The EC Treaty, which has now been renamed the Treaty on the Functioning of the European Union (TFEU), uses the term residence permit in three places. The Lisbon Treaty entered into force on December 1, 2009.

In many guidelines and ordinances that have been issued since then, there are legal definitions of the term `` residence permit '' which, however, are not uniform, but differ slightly from one another.

Some legislation excludes temporary or short-term residence permits from its scope.

Uniform design of the residence permit

The concept of the residence permit has found its way into national legal systems primarily through Regulation (EC) No. 1030/2002, as amended by Regulation (EC) No. 380/2008. With the regulation, a uniform European appearance was established for residence permits that are issued to non-EEA citizens. The other EEA countries ( Iceland , Liechtenstein and Norway ) as well as Switzerland are obliged to adopt the provisions of the ordinance in their national legal systems.

Five years earlier, on December 16, 1996, the Member States had decided at the administrative level to make residence permits uniform.

Sometimes stickers and cards are used, e.g. B. in Denmark and Slovakia . Older sticker variants that are no longer issued today are still in circulation in many EEA countries and will be replaced by the newer plastic card when the passport is renewed. The original variant of the residence permit, on which the card variants are based, was designed by the German graphic artist Reinhold Gerstetter . He came up with the idea of ​​the outline of a bull in connection with Greek mythology about Europe and the bull .

The following information must be provided on the residence permit: Title of the document (residence permit) (1), document number (2), surname and first name (s) (3.1), validity (4.2), place of issue and date of the start of validity (5.3.) , Type of title (6.4), comments, including information on the work permit (7.5), date, signature, visa (8), national emblem of the member state in the print image (9), machine-readable zone (10), zone that is exclusive to the respective member state indicates (11), metallized tilting effect with the country code of the respective member state, if a sticker is used (12), optically variable mark ( OVD ) which corresponds at least to the security feature of the uniform visa sticker in terms of identification quality and the security level (13), photo ( 14), in the case of a separate document on the back, information on the date / place of birth, nationality, gender and comments and, if applicable, address of the owner (15 ).

The original version of the ordinance (relating to stickers) entered into force on August 14, 2002. The amended version (regarding cards in ID-1 and ID-2 format) has been in effect since May 19, 2008.

The regulation applies directly in all member states and overrides conflicting national regulations.

The term was only incorporated into legislation when the Residence Act (AufenthG) came into force on January 1, 2005. Since then, the residence title has been the generic term for the formal residence rights regulated in the Residence Act; at the same time it has replaced the previous generic term of the residence permit . The German legal system is based on the broad European definition of residence permit and includes visas.

According to § 4 Abs. 1 AufenthG are residence permits

No residence permit, but documents that prove a residence status are nonetheless

Germany issued residence permits in the form of stickers until August 31, 2011. With the introduction of the electronic residence permit , a plastic card in ID-1 format has been issued since September 1, 2011. 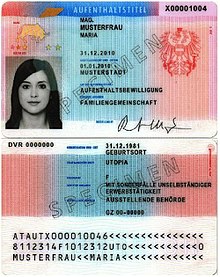 Residence permits are issued as:

Since January 1, 2006, residence permits have been issued according to the uniform pattern in ID-1 card format, previously in sticker form ( § 1 NAG-DV).

Residence documents for persons entitled to free movement, including:

are also issued in ID-1 card format, but differ in terms of color and graphics from the requirements of Regulation (EC) No. 1030/2002.

Although it has sticker format, it is designed differently.

Implementation in the Netherlands

In the Netherlands , all residence permits, including those for EEA citizens, are issued according to a uniform model:

issued as a biometric foreigner's identity card since January 24, 2011 .

Liechtenstein issues residence permits in a standardized form in the following variants:

In Belgium , residence permits are issued according to a uniform template in the following variants:

France issues the following residence permits according to a uniform template:

Since May 13, 2002, residence permits, residence cards and residence certificates have been issued in the form of plastic-coated cards based on the uniform European model. Copies of the old models, valid until May 12, 2012, are still in circulation.

Implementation in Great Britain and Ireland

Great Britain and Ireland are not members of the Schengen area . The border controls to and from these countries have not been dropped. They only partially participate in the Schengen rules and decide on a case-by-case basis which rules they want to accept. In the case of Regulation (EC) No. 1030/2002, both countries informed the Council in December 2003 that they would like to participate in the regulation on uniform residence permits and apply the regulation.

In Romania there are the following residence permits based on a uniform template.

followed by a personal identification number. If these documents are issued to foreigners who have been granted protection status in Romania, the purpose of the stay can be as follows under “Observaii” (remarks): “Refugiat” - valid for 3 years or “Protecție subsidiară” (subsidiary protection - valid for 1 year), followed by a personal identification number.

In Spain , the Permiso de residencia expedido a nacionales de terceros países (residence permit for third-country nationals) is issued according to a uniform model.

Implementation in other countries

The modalities for other EEA states can be found in the update of the list of residence permits in accordance with Article 2 (15) of Regulation (EC) No. 562/2006 or in later revisions, e.g. for the Czech Republic .