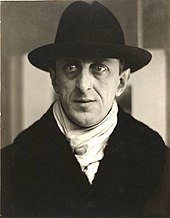 Marsden Hartley (actually Edmund Hartley ; born January 4, 1877 in Lewiston , Maine , † September 2, 1943 in Ellsworth , Maine) was an American painter. He is considered one of the most distinguished painters of classical modernism in the United States. 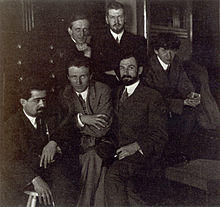 Edmund Hartley was from a small town in the New England state of Maine. He was the only boy in a family of nine. At the age of 13 he painted objects from nature while helping a local naturalist to document the local butterflies, insects and flowers in the area. In 1896 he began an art class in Cleveland , enrolled at the Cleveland School of Arts that year, and in 1899 received a five-year scholarship to study art in New York , where he studied at the Chase School and the National Academy of Design . At the National Academy of Design he attended the master class with William Merritt Chase . During this time he studied a technique called " Segantini stitch", where pure color was applied to the canvas side by side in long, wide strokes. In 1906, back in his hometown Lewiston, he took the maiden name of his stepmother "Marsden" as his first name. In 1909 he met Alfred Stieglitz , who in the same year opened Hartley's first solo exhibition in his New York gallery 291 . When Stieglitz's generosity gave him the opportunity, he crossed the Atlantic in April 1912 and stayed in Europe for a few years.

Portrait of a German Officer (1914), Metropolitan Museum of Art

First he went to Paris , where he socialized with his patron Gertrude Stein . Here he met the sculptor Arnold Rönnebeck and his cousin, the German officer Karl von Freyburg , and, after a short visit in January 1913, he decided to stay a little longer in Berlin , moving to the metropolis with Freyburg in May 1913 lived there until December 1915. Hartley turned away from his previously cultivated style of landscape and still life painting, he made contacts with the German avant-garde and maintained a particularly intensive exchange with Wassily Kandinsky and Franz Marc , their artistic work, in addition to Cubism and Orphism , became determinative of Hartley's work.

The result was a series of paintings that were first shown by Hartley's sponsor Alfred Stieglitz in his New York gallery 291 and are now considered icons of the American avant-garde . In them Hartley painted both figurative ( The Warriors. 1913) and increasingly abstract depictions of the Prussian military, which he deeply admired as an expression of powerful masculinity. Georgia O'Keeffe, on the other hand, thought the pictures were far too loud in composition and colors, like a brass band in a small closet . Hartley processed the war death of his friend Karl von Freyburg on October 7, 1914, with whom he had an erotic relationship, in a series of twelve symbolic paintings.

The war events forced him to return to the United States and went back to his hometown in order to become the "regional great" among visual artists in Maine and to produce an independent, original American painting . The later work is characterized above all by landscapes, seascapes and genre paintings , which have an expressively contoured color scheme.

Marsden Hartley's poetry and painting have been understood by art history primarily as part of the avant-garde and as modernist. Recently, Donna M. Cassidy has emphasized the connection between Hartley's work and American regionalism ( Grant Wood , Thomas Benton ).

In 2014 the first exhibition Marsden Hartley: The German Paintings with 30 paintings from his time in Berlin took place in the New National Gallery in Berlin .