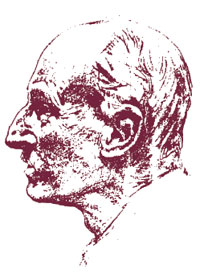 Edward Theodore Compton , usually called ET Compton (born July 29, 1849 in Stoke Newington , England , † March 22, 1921 in Feldafing ) was an English alpine painter and mountaineer . He had lived in Germany since he was 18 years old and at that time also took German citizenship. As a mountaineer, he made a good 300 significant ascents, including 27 first ascents . To this day Compton is known for his 1700 mountain motifs in impressive and at the same time topographically precise watercolors , pen and brush drawings .

Edward Theodore Compton was born in Stoke Newington (now a suburb of London) in 1849, the son of the art-loving insurance agent Theodore Compton. With his parents, who were devout Quakers , nature experiences were the focus of everyday family life. In 1863 Compton began his first nature studies and attended various English art schools, including the Royal Academy of Arts in London for a short time . Otherwise, he continued his self-taught training and worked on motifs from the English lake areas. 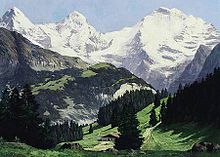 Summer day in the Bernese Oberland with the Eiger, Mönch and Jungfrau

Compton's father tried to give his children the best possible education. The high school costs in England and the ideal environment, especially for his talented son Edward Theodore, prompted the family to emigrate to Germany in 1867 and move to Darmstadt . At that time, Darmstadt was the residence of the Grand Duchy of Hesse under Grand Duke Ludwig III. an artist stronghold, in which many artists had come together in the Rheinischer Kunstverein . There was also a special museum drawing school that attracted many interested young people and from which, among other things, Eugen Bracht, later known as a landscape painter, emerged . Compton's diary shows that not only his father, but also he, gave drawing lessons in Darmstadt. For example, the Hesse princess Alice was one of his students.

In 1867 Compton made a trip to the Rhineland and created several sketchbooks, which, however, have not been preserved together. The sketchbook that was made in May and June 1868 while hiking on the Moselle and through the Eifel has been handed down. In July 1868 the entire Compton family traveled to the Bernese Oberland after Edward Theodore had visited Lake Thun in 1867 and reported enthusiastically about it. On this second voyage, Compton is said to have spontaneously decided to become a mountain painter and mountaineer while crossing Lake Thun when the fog surprisingly parted and the Eiger , Mönch and Jungfrau stood over him almost as if in a vision.

From 1869 Compton lived in Munich and exhibited there for the first time in the Glaspalast two years later . In 1872 he married Gusti von Romako (Auguste Amalie Plötz) from Munich and took her on a two-year trip that took the young couple to Tyrol, Carinthia and Italy. In 1874, Compton was now 24 years old, the two finally settled in Feldafing on Lake Starnberg . 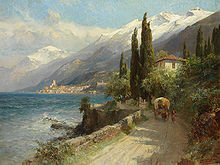 In the following years Compton traveled to the mountains of Austria, Scandinavia, North Africa, Corsica and Spain and processed his travel impressions in a large number of oil paintings and watercolors , but also in ink drawings. The preponderance of the alpine scenes hides the fact that Compton also visited and captured areas outside of it, such as the High Tatras , the Scottish Highlands and the Hebrides , but also the Lofoten and the North Cape and the Colombian Andes . 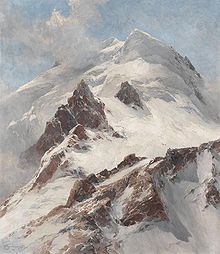 Piz Morteratsch, view from Fuorcla Boval to the north flank (1914)

He processed the impressions he received during his mountaineering tours in the Alps, the Pyrenees, Corsica and Scotland in his works, which, with their topographically correct views, have documentary value. In 1880 he became a member of the Royal Academy London, as well as the exclusive British Alpine Club and the German and Austrian Alpine Club (DuÖAV). In addition to his work as a painter, Compton worked as an illustrator for various alpine magazines and publications. 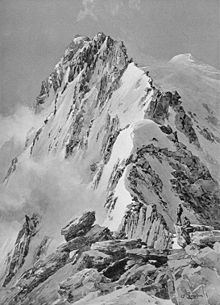 In 1909, Compton was accompanied on many tours in the Silvretta by his friend Karl Blodig . During the First World War, Compton received an invitation from the Austrian Army Command to paint pictures of the mountain front. The Bavarian High Command forbade him to do so, although Berlin had expressed its approval. In addition, he was excluded from the Munich artists' association at the time because he was English.

Compton also became known throughout Europe as an illustrator in the publications of the German and Austrian Alpine Club (DuÖAV). The illustrations in Emil Zsigmondy's book Im Hochgebirge (1889) go back to him, as well as the illustrations in Alpinismus in Bilder by Steinitzer (1913) or Over Fels und Firn by H. Hess (1901).

Edward Theodore Compton died at the age of 72 on March 22, 1921 in Feldafing on Lake Starnberg .

In his honor, an Alpine Club hut in the Gailtal Alps was named E. T. Compton Hut .

Initially still attached to the English Romanticism, Compton later developed a realistic new way of depicting nature by allowing himself to be guided by his artistic ideas, but remaining geographically exact as possible. In this context it is revealing that Compton had dealt with questions of surveying technology.

Even his early watercolors show the great importance of brightness and light in Compton's works. What is also striking in Compton's compositions is the way in which he used the diffuse technique of various media such as water and air, including rising mist and fog, to depict the peculiarities and momentary moods of his landscapes.

Even if Compton never founded or initiated a school, many artists took Compton's style as a model. B. Ernst Platz and Karl Arnold as well as Compton's son Edward Harrison Compton and his daughter Dora Compton.

The tendency towards drawing and painting is evident in the Compton family members.