Leo Dietrich Franz Reichsfreiherr Geyr von Schweppenburg (* March 2, 1886 in Potsdam ; † January 27, 1974 in Irschenhausen ) was a German general of the tank troops in World War II as well as commander in chief of Panzer Group West and since July 1944 inspector of the tank troops. He wrote several military works and was involved in the development of the Bundeswehr in an advisory capacity . 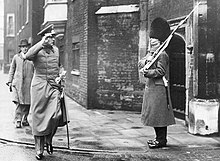 Geyr occurred on 29 June 1904 as a cadet in the Dragoon Regiment "King" (the second of Württemberg) no. 26 in Stuttgart one. After his assignment to the Potsdam War School , he was promoted to lieutenant on October 19, 1905 . After attending the War Academy in Berlin from 1911 to 1914, he took part in various campaigns in Poland, France, Russia and the Balkans during the First World War as a cavalry officer ( Rittmeister ) until he was transferred to the General Staff in 1917 . In addition to the two classes of the Iron Cross and the Friedrich August Cross , he was awarded the Knight's Cross of the Württemberg Military Merit Order , the Austrian Military Merit Cross III. Class with the war decoration, the knight's cross IV. Class, II. Level of the Bulgarian military order for bravery and the wound badge in black awarded.

Geyr remained in the army even after the peace agreement and was accepted into the Reichswehr . Among other things, he was a teacher at the infantry school in Munich and rose steadily as commander of various cavalry units and in general staff assignments; In 1932 he became a colonel . From 1933 to 1937 he was a military attaché , since July 1, 1935 also an air attaché , in Great Britain, Belgium and the Netherlands with headquarters in London and was appointed major general during this time (September 1, 1935). During the Rhineland Crisis in 1936, Geyr sent reports to Berlin warning against underestimating the British and pointing out the dangers of Hitler's political adventurism. This earned him a reprimand from War Minister Werner von Blomberg and was probably the reason for Hitler's distrust of Geyr. After his recall from London he took over on October 1, 1937 - appointed lieutenant general - as commander of the 1935 established 3rd Panzer Division in Berlin, which he was part of the XIX. Army Corps ( General of the Panzer Troop Heinz Guderian ) until October 6, 1939 during the attack on Poland . For a victory at Kulm he was commended by Hitler on the battlefield.

After a lengthy absence due to illness, Geyr was promoted to commanding general of the XXIV Army Corps on the Western Front on February 15, 1940, and to general of the cavalry on April 1 ( renamed General of the Armored Force in 1941 ). With his army corps he first took part in the western campaign and then at the beginning of the campaign against the Soviet Union - later as the commanding general of III. , later of XXXX. Army Corps - as part of Panzer Group (later Panzer Army) 2 (Guderian) took part in the war against the Soviet Union . He fought near Minsk , Smolensk , Kiev and Brjansk , closed the ring around Kiev with his armored forces coming from the south, and with his corps formed the lead of the 2nd Army in the failed advance on Moscow and was involved in the Battle of Kharkov (May 1942) . On July 9, 1941, he received the Knight's Cross of the Iron Cross .

In 1943 Geyr became the commanding general of the LXXVI. Army corps transferred to France. When Guderian became inspector general of the armored forces in March, he commissioned Geyr to set up ten motorized infantry and armored divisions. Geyr also took over LVIII in the summer of 1943. Reserve tank corps. In January 1944, the 5th Panzer Army , which was disbanded in Africa in 1943, was reorganized from the staff of the General of the Armored Troops West (Geyr) (January 1). It was shortly thereafter in Panzer Group West renamed (January 24) and as OKW - Reserve First the OB West , Field Marshal Gerd von Rundstedt , then directly to the High Command of the Armed Forces , that is subordinate to Hitler.

After the Allies landed in Normandy on June 6, 1944 , Panzer Group West fought under the command of Army Group B in the Battle of Caen . Geyr was about to launch a massed counterattack to throw the landed troops back into the sea when his headquarters were destroyed by an Allied air strike on June 10th. Geyr himself was wounded, and many of his officers were also wounded or killed. SS-Oberst-Gruppenführer Josef Dietrich took over the leadership of the tank units with the staff of his I. SS-Panzer Corps , while Geyr reorganized his headquarters. Geyr was replaced on July 2nd - like Rundstedt, who was replaced by General Field Marshal Günther von Kluge as OB West - by the General of the Panzer Troop Heinrich Eberbach and transferred to the Führer Reserve . In August 1944 he was appointed inspector of the armored troops in the reserve army, and in May 1945 he was taken prisoner by the US in Bavaria , where he remained until July 1947.

After his release, he wrote his memoirs and several military writings. In 1950 he was - along with other former generals of the Wehrmacht who had distanced themselves from National Socialism, such as B. Hans Speidel and Adolf Heusinger , who later became the first General Inspector of the Bundeswehr , - member of the “Study Committee for German Security Issues”, which was supposed to help prepare the Bundeswehr.