Fisherman in the 16th century 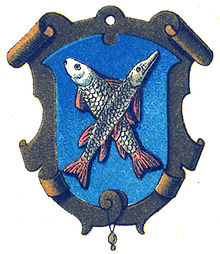 Guild coat of arms of the fishermen

The activity as a fisherman can already be assumed for the earliest human forms of society of the hunters . The fisherman's profession often already exists in societies with only a small division of labor. It requires the possession and mastery of very special work equipment such as fishing boats , pirogues or fishing cutters as well as fishing nets .

In some societies, fishermen often formed a kind of caste of their own, similar to the basic professions blacksmith or healer, or are practiced by a certain ethnic group . In West Africa, for example, there is the Bozo fishing people on the Niger . There are also fishermen castles or peoples in India .

The fishing law in Germany is a matter of the state. The corresponding legal bases are laid down in the state fisheries laws.

The fisherman as literary figures

Since fishermen have made a significant contribution to the nutrition of the population in many areas for millennia, they have found their way into numerous literary works. Well-known examples are Simon Petrus in the Bible , the fairy tale About the fisherman and his wife by the Brothers Grimm , the story The old man and the sea by Ernest Hemingway or Gorch Fock's “Seafaring is Not” for the beginning industrialized German deep sea fishing of the late 19th century . Bonnie-Sue Hitchcock , who practiced the profession for many years, devotes a few chapters to the description of activities on board in her youth novel The Smell of Other People's Houses (2016), both deep-sea fishing for salmon in the Alexander Archipelago and river fishing in the Yukon using fish traps.