The title of this article is ambiguous. For the Estonian diplomat see Andres Rundu .

The city is located at 1095  m above sea level on a scenic hill on the south bank of the Okavango in the otherwise flat foothills of the northern Kalahari basin . The Okavango is the border river to the northern Republic of Angola and a lifeline for the Kavango people who live from fishing and agriculture . There is a border crossing and ferry connection across the river to Calai, which is on the Angolan side .

Like large parts of northern Namibia, Rundu has a subtropical climate . It can get very humid on the banks of the Okavango, especially during the summer months from October to April. 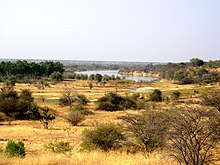 The Okavango near Rundu

The Okavango near Rundu (at foggy sunset)

The area north of the Okavango was colonized in the 18th and 19th centuries by the Portuguese who, around 1900 , pushed many of the Kavango, originally on the Angolan side of the river, to the south side by building forts along the river . This became part of the German South West Africa protected area in 1885 , after which an expedition was not undertaken into the Kavango until June 1903, led by Richard D. Volkmann . Due to the geographical remoteness of the area, only a few missions were founded in Nyangana (1910) and Andara (1914).

Rundu was founded in 1936 by the South West African government on a hill on the Okavango bank as the administrative seat of the Kavango, as this place was better connected to the rest of Namibia in terms of traffic than the previous capital Nkurenkuru , 140 kilometers further west , which is still the residence of the Uukwangali- Kings . Rundu was also called Runtu until the 1940s .

In the late 1960s suffered Rundu as a result of apartheid , a segregation of the neighborhoods . Between 1969 and 1975, the Tutungeni district had to be evacuated by the black population and they were relocated to the Nkarapamwe district. Since 1970 Rundu has been the capital and seat of government of Homeland Kavangoland , which on May 4, 1973 was granted an autonomous status with self-administration within Namibia, with the official languages English , Afrikaans and RuKwangali . In 1970, a Kavango Legislative Council (German about: legislative Kavango Council) was created, consisting of elected members and designated members of the five kingdoms of the Kavango (Gciriku, Kwangali, Mbukushu, Mbunza and Shambyu).

During the Namibian War of Independence, supported by Angola (1966 to 1988) and at the same time during the civil war in Angola , the city was the stationing site of the South African army and was regularly raided by military raids against relatives north of the Okavango who had come from Angola. At the end of the 80s, United Nations blue helmet soldiers ( UNTAG ) were stationed in Rundu , who also accompanied the elections for the constituent assembly of Namibia from 1989 to 1990: main contingent Fin Bat, Italian helicopter pilots, Spanish Casa pilots, Swiss medical personnel Medic Unit as well as Austrian, German, Pakistani, Jamaican and Australian police officers.

Since Namibia's independence in 1990, the population of Rundu has more than tripled due to rural exodus and political refugees from Angola, which is particularly reflected in the newly formed informal settlements on the western and eastern outskirts of the city. With the support of international aid organizations, however, the city and state are investing a lot in public infrastructure, which means that in addition to new public facilities such as schools and hospitals, there is also a technical infrastructure for central waste disposal , communication (since 1980) and drinking water and sewage (since 1969 ) is invested.

In 1994 the Roman Catholic Mission Rundu, founded in 1968, was promoted to the Apostolic Vicariate of Rundu , with parishes all over Kavango. Rundu is still one of the poorest cities in Namibia, but since the completion of the Trans-Caprivi Highway (Trans-Caprivi Highway) to Zambia , the city has experienced an economic boom and even greater immigration.

sources are missing in this section.

Rundu is the administrative and government seat of Kavango with the Regional Council Kavango-East Regional Council and several branches of Windhoek ministries. The City Council of Rundu (Rundu Town Council) consists of the Mayor of Rundu and Councilors (Councilors) , responsible for the areas mayor's office, finance and information technology, civic affairs, public relations, infrastructure and urban planning. The Republic of Angola has a consulate in Rundu .

The urban area of ​​Rundu is divided into the two constituencies Rundu Stadt (Rundu urban) and Rundu Ost (Rundu east). The center only extends in some places such as Rundu Beach and some lodges up to the Okavango and otherwise extends along Eugene Kakururu Str., Which runs perpendicular to the river , on which the Tutungeni district to the west and the Nkarapamwe and Safari districts to the east. At the northern end of the main road you come across Maria Mwengere Str., The old river embankment road to Divundu and the Caprivi Strip , which, however, has only been significant up to the city limits since the completion of the B8 that now leads into the Caprivi . The B8 itself runs south past Rundu and forms just a junction with the lower end of Eugene Kakururu Str. Of the informal settlements, Sauyemwa is to the west and Donkerhoek, Kehemu and Ndama and to the east of the city.

The city is divided into ten districts. Sauyemwa forms the border of the city to the west, to the east the residential area Queens Park with high quality of living adjoins. Industrial, a central business park, is south of Queens Park and Tutungeni on Independence Road. The central residential areas Nkarapamwe, Safari and Donkerhoek are located between Eugen Kakukuru St, Markus Siwarongo St and Independence Road. Nkarapamwe is home to the heavily frequented ELCIN Church and the Church of St. Mary of the Roman Catholic Church. To the north and west of Nkarapamwe are the main shopping streets with an increasingly dense inner city character. Kehemu is the easternmost district, to which only the UNAM and the Rundu Vocational Training Center are connected. Millennium Park and Ndama extend along the B8 to the south .

The following official final result was determined in the 2015 local elections .

For a long time, the Rundus economy was based on the growing economic structures of the population and has recently been increasingly supplemented by trade and tourism. Around 50% of the population in the surrounding area is engaged in agriculture and fishing, which is also the livelihood for the majority of small businesses in the city. Another branch of the economy that has grown is the handicraft of the Kavango wood carvers, whose products are sold throughout Namibia. The Mbangura Woodcarvers Cooperative and Rundu Open Markets should be mentioned here as references.

The school system in Rundu has been expanded since independence, which means that the education sector provides a relatively large number of jobs. Since the end of the civil war in Angola (2002) and since the completion of the Trans-Caprivi Highway ( national road B8 ) to Zambia (2004), Rundu has increasingly developed into an international trading center of the Walvis Bay Corridor Group (WBCG), and the entire The region is also being discovered and developed more through tourism. In Shambyu , around thirty kilometers east of Rundu, there is a catholic mission and the Kavango Museum, which is well worth seeing, and the B10 national road leads to the west of the region.

The city has its own airport .

Rundu has three football clubs, all of which play in Rundu Stadium : the United Stars and the Cuca Tops, both of which last played in the NPL in the 2001/02 and 2002/03 seasons (the former qualified again for the 2009/10 season ) and the Rundu Chiefs.