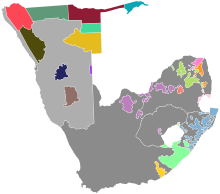 Map of the homelands in Namibia and South Africa 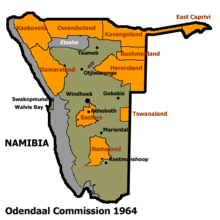 Planned homelands according to the Odendaal Plan 1964 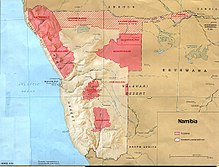 A spatial separation of settlement areas between the indigenous and the European population was already beginning to emerge during the German colonial rule in South West Africa. In 1902, Kurt Streitwolf proposed that two areas be designated as reserves for the tribal groups of the chiefs of Okahandja and in the Waterberg area. Further similar determinations in other parts of the colony were planned, but remained unrealized by the outcome of the First World War.

The subsequent mandate power, the South African Union , initially proclaimed additional areas as guaranteed living space for some indigenous groups, but because of the attractive agricultural land drove some of such tribal groups from the areas originally intended for them.

New reserves were created in 1947 with a total area of ​​over 3 million hectares. The largest areas were called Aminius Reserve , Epukiro and Waterberg East Reserve . Due to a lack of water, they were sometimes characterized by very unfavorable living conditions.

The development of the settlement area of ​​the Rehoboth Basters had taken a separate path. Since they immigrated to South West Africa around 1868, an awareness of self-government had gradually developed among them. In 1923, the South African government had promised them the recognition of their Raad as one of several independent administrative bodies. But there were also trends among the Basters that pushed for full independence. This caused South Africa to withdraw the offer of recognition and to set up a local administration by means of a government ordinance. Later, in the course of the investigations of the Odendaal Commission (1962–1963) into this population group, these different perspectives came to light again. It was not possible to clarify which type of self-administration was desired over a longer period of time. This prompted the South African Prime Minister Vorster, together with his administrator for South West Africa, to pay a visit to the Rehoboth magistrate in January 1969 to discuss these differences. As a result, on April 1, 1969, the South African government, in the form of the Minister of Colored Affairs, took control of the area of ​​the Rehoboth Basters .

In 1962 the South African government founded the Odendaal Commission ( Commission of Inquiry into South West African Affairs ) with the ostensible aim of promoting economic development and the material and social advancement of the population of South West Africa, especially groups of non-European origin, on the basis of a five- To advance the annual plan. In 1964, in the Report of the Commission of Inquiry into South West Africa Affairs, 1962-1963, she suggested that "reservations" were necessary for the individual ethnic groups and the relocation of their relatives. The plan, named after the chairman of the commission, Fox Odendaal , allocated about 40 percent of the entire area of ​​South West Africa to the black and colored populations, separated by tribes.

Members of the commission were:

as an external consultant:

The plan was based on apartheid policy and the official principle of "separate development" ( racial segregation ) expressed therein . Specifically, however, it was intended to divide the black majority by allocating tribal reserve areas - the so-called homelands - to keep it dependent on the white government in Pretoria and its administrators for South West Africa and thus to secure the supremacy of the white minority population. For this reason, the non-white residents were initially divided into twelve ethnic groups, eleven of which were to have their own homeland under self-administration . The Cape Coloreds were excluded from this .

The first six homelands in South West Africa, which together with all the others ultimately took up a good 40 percent of the country's area, were established in 1968. To this end, the South African parliament passed the Development of Self-Government for Native Nations of South-West Africa Act, No. 54 of 1968 ( German  about the law for the development of self-government of the native nations in South West Africa ), which initially left the Tswana and San unmentioned and was not valid for the Coloreds, Nama and Rehoboth Baster , as they came under the jurisdiction of the Department of Colored Affairs ( German about the Ministry of Colored Affairs ) fell.

Of the total of ten homelands in South West Africa, three received an autonomous status : Ostcaprivi , Okavangoland and Ovamboland .