The SWAPO Party of Namibia ( SWAPO ; formerly South-West Africa People's Organization or in German South-West African People's Organization ) is a political party in Namibia . Since the country gained independence in 1990, it has been the country’s governments on the basis of significant election victories. Before that, the SWAPO was a Marxist- oriented liberation movement .

With its military arm, the People's Liberation Army of Namibia , SWAPO led , among other things, armed battles first from Zambia and later from Angola against the occupying power of South Africa , the Namibian liberation struggle .

The founding day of the party is April 19, 1960. Well-known founding members are Andimba Toivo ya Toivo and Samuel Nujoma . An important predecessor organization of SWAPO was the Ovamboland People's Organization (OPO) founded in 1957 , which had previously left the SWANU due to differences in content .

In 1961, it was decided to prepare for the armed struggle against the South African apartheid occupying power, which began on July 18, 1966. On August 26, 1966, there was the first clash with South African troops.

Since the beginning of 1978, minor armed conflicts have occurred in the border zone between Angola and Namibia. In doing so, u. a. Investments of the Ruacana power station on the Kunene badly damaged. As a result, South Africa undertook a one-day military push to destroy two large SWAPO base camps. The operation was code-named "Moscow and Vietnam". When the South African Army launched an air raid with bombers and airborne units on the SWAPO headquarters near the Angolan city ​​of Cassinga about 250 kilometers northwest of Ruacana on May 4, 1978 as part of Operation Reindeer , around 600 people, including women, were lost in the SWAPO camp and children, their lives. Documents from the SWAPO command were seized by South African military personnel.

In 1982 fighting between South African troops and SWAPO killed 1,268 liberation movement fighters and 77 South African soldiers. At the end of May 1983, SWAPO President Sam Nujoma asked UN Secretary General Perez de Cuellar to negotiate with South Africa and SWAPO about a ceasefire and the implementation of UN Resolution 435 . During several military operations ( Protea , Daisy ) by the South African armed forces in the summer of 1983, more than 5,000 soldiers penetrated up to 250 kilometers into southern Angola and destroyed SWAPO bases. By mid-August 1983, 418 SWAPO fighters and 24 South African soldiers had been killed. South Africa temporarily controlled the Angolan provinces of Cuando Cubango , Cunene and Moxico .

From November 7th to November 11th, 1989, the first free elections took place, in which the SWAPO prevailed against the Democratic Gymnastics Alliance with about 57 percent of the vote and then, Sam Nujoma, was the president. On December 8, 1994, SWAPO won 53 out of 72 seats in the parliamentary elections. In 1999 Nujoma began his third term as President of Namibia after initiating an amendment to the constitution to allow himself a third term. In 2004, he was followed by Hifikepunye Pohamba to the post of President, who is considered to be the candidate chosen by Nujoma himself . Nujoma, however, continued to chair SWAPO until 2007. Then, as agreed, Hifikepunye Pohamba was elected party president and confirmed in office in 2012. Pohamba resigned from all political offices on April 18, 2015. President Hage Geingob took over the party business on a temporary basis and was officially elected party president on November 26, 2016.

Politically and ideologically, the SWAPO can be classified as African-nationalist. Since its inception, the party has given itself three different basic programs (1961, 1976, 1991). In the 2004 election manifesto, entitled Program of Action for Peace, Unity and Sustainable Development , the main emphasis is on national unity, peace and reconciliation. Other topics include expanding justice within society and creating a dynamic economy. In the social area, the focus is on land reform, gender equality, improving the education system, expanding health services and infrastructure, and supporting the elderly and people with disabilities.

With regard to land reform , the aim is to distribute commercial farmland more evenly without jeopardizing the productivity of the land in question. There is agreement in the party that the “Willing Buyer, Willing Seller” principle has failed. With the help of property valuations and tax regulations, one would like to develop new land that was previously classified as unproductive. Land reform is also to be promoted by increasing financial resources. In addition, the redistribution process should be accompanied much more by further training and capacity building in order to guarantee sustainable land use.

The highest decision-making body is the party congress, which meets every five years. It consists of around 570 delegates. The individual members come from the national, regional and district levels as well as various affiliated organizations, such as women's or youth organizations.

The party leadership consists of the president, the vice-president, the general secretary and the deputy general secretary and is elected by the Congress. The party leadership can also fall back on so-called "National Officers", who act as spokesmen for the party for certain areas. Since December 1, 2012, the office of the Secretary General has been a full-time position and may not be held at the same time as a ministerial post.

Vertically, SWAPO is divided from bottom to top into Sections , Branches , Districts , Regions and the national level.

Voting behavior in Namibia is strongly shaped by ethnic loyalty. Since independence, SWAPO has been able to rely almost unrestrictedly on the support of the largest Ovambo population in northern Namibia. These make up about half of the population of Namibia, which means that SWAPO can usually unite the majority of the votes. 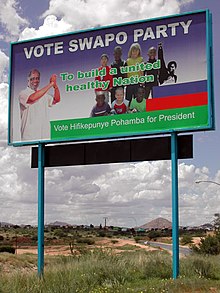