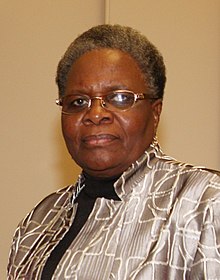 Before that she was Minister for Information and Communication Technology in 2005 and shortly thereafter until 2012 Minister for Environment and Tourism .

Ndaitwah became a member of the SWAPO party in 1966, but went into exile shortly afterwards. In 1976 she received her high school diploma in the Soviet Union and studied in the United Kingdom from 1983 to 1989, first at the then Glasgow College of Technology and later at Keele University , with an MBA and international relations degrees .

In 1996 she became a member of the National Assembly and briefly Deputy General Secretary of the South West African People's Organization. In 2000 she took over her first ministerial post in the Ministry for Gender Equality and Child Welfare and at that time advocated a 30% quota for women in parliament.

Nandi-Ndaitwah is married and lives in Windhoek .

Minister of Equality of Namibia

Environment and Tourism Minister of Namibia