About the fisherman and his wife

About the fisherman and his wife; Depiction by Alexander Zick

A fisherman who lives with his wife in a squalid, called "Pissputt" cottage, fishing in the sea a Butt who asks as enchanted prince for his life; the fisherman releases him again. When Ilsebill, the fisherman's wife, hears this, she asks him whether he had wished nothing from him in exchange for the freedom of the fish. She urges her husband to call the Flounder again to ask for a little hut. The magic fish fulfills this wish for him. But soon Ilsebill is no longer satisfied with it. Again she asks her husband to call the Flounder ashore and express a greater wish.

The refrain that has become known with the fisherman's call to the flounder reads every time:

The fisherman does not share his wife's wishes, but bows to her will despite growing fear. The more immoderate Ilsebill's wishes become, the more the weather worsens. The sea first turns green, then blue-violet, then black, and the storm becomes more violent. After the hut she asked for a lock. When she is not satisfied with that either, she wants to become king, emperor and finally pope. All these wishes are fulfilled by the Flounder and announced with the formula: "Just go there, it is already her."

When she finally demands to become like God, she is transferred back to the poor hut, as at the beginning. ("Ga man hen. Seitt all neither in'n pissputt.") 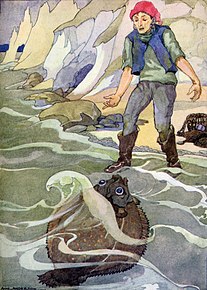 Philipp Otto Runge sent Johann Georg Zimmer , the publisher of Achim von Arnim's Des Knaben Wunderhorn , the personally recorded fairy tale in a letter dated January 24, 1806, together with another, which was also to be included in Grimm's fairy tales as Von dem Machandelboom . In the letter he stated that he had adhered to the oral tradition, as it sounded , and found it actually sublime patetic and is greatly enhanced by the fisherman's miserliness and indifference . According to the linguistic form of the text, Pomeranian childhood memories may have been mixed with newer ones from Hamburg. Runge had probably told the fairy tales earlier in story evenings. Apparently in response to Achim von Arnim's public appeal to send in popular literature, he wrote them down. Through this his text reached the Brothers Grimm. Runge later wrote at least three further, varied versions, one of which was published as a copy by Friedrich Heinrich von der Hagens in 1812 by Johann Gustav Büsching .

Grimm's first print from 1812 was based on Runge's first version, from which Wilhelm Grimm made a copy in 1808. Büsching's first publication had little impact. From the 5th edition of 1843 onwards, Grimm's text was based instead on Runge's fourth version, which his brother Daniel printed in bad Hamburg language in 1840. Grimm's later editions do not differ. 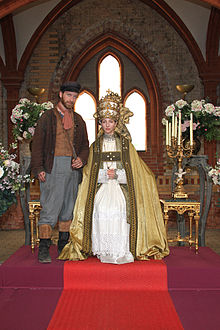 Fabian Busch and Katharina Schüttler in June 2013 during the filming of a remake as part of the ARD series Six in one go .

Commons : From the fisherman and his wife  - collection of pictures, videos and audio files

Wikisource: From the fisherman and his wife  - sources and full texts