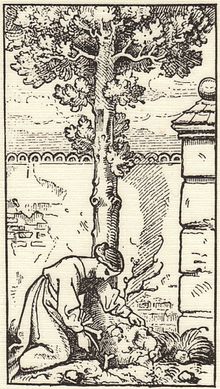 From the Machandelboom (Vom Wacholderbaum) is a fairy tale ( ATU 720). It is in the children's and house tales of the Brothers Grimm at position 47 (KHM 47) in Low German . Up to the 2nd edition the title Van den Machandel-Boom was written , up to the 4th edition Van den Machandelboom . The fairy tale goes back to the painter Philipp Otto Runge and was first published in 1808 in Achim von Arnim's newspaper for hermits under the title Von den Ma [c] handel Bohm . Ludwig Bechstein adopted it in his German fairy tale book in 1845 as No. 64 Vom Knäblein, vom Maägdlein and the wicked stepmother , in 1853 as No. 66 The Juniper Tree .

The pious wife of a rich man, while peeling an apple under the juniper tree , cutting her finger, wishes a child as red as the blood and as white as the snow. She becomes pregnant, dies giving birth to her son and is buried under the tree.

After the grief, the man marries a woman who has a daughter with him but hates the stepson. When the daughter once wanted an apple, she first got it. But when she asks that her brother get one too, the mother takes the apple away from the daughter so that she can offer one to the brother first. But when he bends down in the chest with the apples, the stepmother knocks off his head with the lid. Startled, she puts it back on, puts on a scarf and sits down in front of the house with the apple in her hand. She has the daughter hit him on the ears because he doesn't answer, so the head falls off. Then she cooks it in the soup and the daughter cries into it. The father is sad when he hears that his son has suddenly left, but he likes the soup.

The daughter collects the bones and, crying, places them in a silk scarf under the tree. Then it becomes light, the juniper branches move like hands, and a beautiful singing bird flies out of a fire in the mist. The bones are gone. The bird sings on the roof of a goldsmith , a cobbler and on the linden tree in front of a mill. For the repetition he asks for a gold chain, red shoes and a millstone. Then he sings on the juniper tree at home, which makes the father feel good and the mother afraid. He throws the chain around his father's neck, his sister's shoes on the ground and his mother's millstone on his head. The son rises from steam and flame. The three eat happily.

The fairy tale is printed in Low German . In later versions (from the 5th edition) the title and the song of the bird are in High German:

"My mother who slaughtered me,
my father who ate me,
my sister, the Marlenichen,
looks for all my benches,
ties them in a silk cloth,
puts them under the almond tree .
Kywitt, kywitt, what vör'n schöön Vagel bün ik! "

Grimm's note notes the origin of Runge , who wrote it down “according to the folk tale”, and names a variant after Moné , according to which the little sister has to cook the soup and sees how little brother sticks out his hand. It buries the bones or hangs them out in the attic. The little bird whistles:

In the Palatinate they say that the children should get an apple for strawberries from the forest, little brother leaves little sister tied to a tree, so he first has to bring it home (probably also to Moné ).

In Hessen the verse reads:

"My mother cooks me,
my father ate me
Sister sat under the table
the bones all picked up,
threw them over the pear tree,
it turned into a bird
that sings day and night. "

In Swabia near Meier No. 2:

"Pinch! tweak!
I am a beautiful little bird.
My mother cooked me
my father ate me. "

Goethe certainly recorded the song for Faust from old hearsay:

"My mother the whore,
who killed me
my rogue father,
who ate me
my little sister
lifted my legs,
in a cool place
then I became a beautiful forest bird
fly away, fly away! "

In the south of France the plot is the same, the song reads according to "Feuilleton des Globe 1830 No. 146 by CS":

In a Scottish fairy tale near Leyden, the ghost of a child as a bird whistles to his father:

Comparable is Albert Höser in sheets for literar. Entertainment 1849 No. 199. There is a similar fairy tale in South Africa. Grimms put etymological considerations on "Marleenken" (Marianchen, Marie Annchen ), "Machandel" ( juniper , also quackholder). The stepmother reminds me of many other fairy tales, the finger cutting of Snow White and a place in Parzival (see Old German Forests 1, 1–13), the collecting of bones from Osiris , Orpheus , Adalbert , KHM 81 Brother Lustig , KHM 46 Fitchers Vogel , an "old dan. Song of the Mariböquelle ", the German" Sage of the drowned child (1st St. 62) ", The priest Amis , the" Negro question at Manni ". Zeus replaces the child's shoulder blade eaten by Demeter with ivory, Thor revives consumed goats "( Demesage 38)". For Mühlstein's they compare Fialar and Galar in the Edda and KHM 90 Der Junge Riese .

Philipp Otto Runge sent Johann Georg Zimmer , the publisher of Achim von Arnim's Des Knaben Wunderhorn , the personally recorded fairy tale in a letter dated January 24, 1806, together with another, which was also to go into Grimm's fairy tale as Von dem Fischer un syner Fru . In the letter he stated that he had adhered to the oral tradition, as it sounded, and found it "actually wistful more like sad and often turns into chill". According to the linguistic form of the text, Pomeranian childhood memories may have been mixed with newer ones from Hamburg. Runge had probably told the fairy tales earlier in story evenings. Apparently in response to Achim von Arnim's public appeal to send in popular literature, he wrote them down. Von Arnim published the fairy tale based on Runge's note in 1808 in his newspaper for hermits . He had his servant Frohreich make a copy of Runge's handwriting, which has survived. The original was lost. Johann Gustav Gottlieb Büsching published it again in 1812 as Von dem Mahandel Bohm , correcting most of the printing errors.

The first print by the Brothers Grimm from 1812 was based on Büsching's and von Arnim's version (although in the first edition of the note it was still claimed that Runge had informed them). Again, it only differs in the spelling and spelling of the dialect. The poem, which von Arnim used rather High German, was also rewritten in dialect. However, their publisher Reimer also made changes. From the 5th edition of 1843 onwards, the Brothers Grimm took over a revision printed by Runge's brother Daniel in 1840, which he said he wanted to orientate himself towards the Hamburg dialect. Ludwig Bechstein's German Fairy Tale Book published the text from 1853 as Der Wacholderbaum in High German, previously from 1845 very briefly as Vom Knäblein, vom Maägdlein, and the wicked stepmother . Ernst Heinrich Meier's The Little Bird on the Oak in German Folk Tales from Swabia (1852), No. 2, which the Brothers Grimm mention in their notes, is limited to the motif of the cooked child who sings as a bird, the oak falls over and kills the woman.

The almond tree belongs to the stepmother's tales like Snow White or Cinderella , it is also related to sibling tales like little brother and sister , where the sister loses the brother and redeems it.

Almut Bockemühl compares the fairy tale with the nightingale myth of Tereus and Procne , the Dionysus myth , but also motifs from shamanism and the Christian Easter festival .

According to Wilhelm Salber , the core ultimately consists in claims to totality, which are expressed in peculiar private mythology and self-insecurity, which can only be overcome by allowing additions and changes.