The title of this article is ambiguous. Further meanings are listed under Shoemaker (disambiguation) .

Guild coat of arms of the shoemaker

The shoemaker (official name; also Old High German "skuohbuozo"; nhd. "Schuhbosser" = shoemaker) is a craftsman who manufactures and repairs shoes by hand . In Germany, shoemaker is a state-recognized training occupation . The term shoemaker is often used for shoemakers . 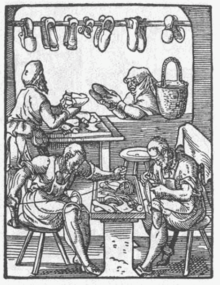 Shoemaker's workshop around 1568: manufacture, repair and sale of shoes

The shoemaker (from: What do you want to become , around 1880): Master with journeymen and apprentice (right). Typical are the three-legged stools, the aprons, the groin and leather storage (back left), the water tub for soaking the insoles (under the table), leather scraps on the floor, a shoe is doubled up (sewn) in the front left, a sole is made in the front right nailed to the wood, the classic tools and a lamp for warming up on the table. The bird cage that is usually present can also be seen at the top of the window.

Origin of the word and name of the craftsman

Shoemaker and shoemaker are two common names for one and the same craftsman. Shoemaker is the official job title. The term Schuster (from Middle High German schuochsuter ) is a combination of Schuh and Old High German sutari , which in turn comes from the Latin sutor = "closer"; In the Middle Ages, the name Sauter , derived from this, was also used for the shoemaker . It was not until the 5th century BC that the profession of tanner separated from that of shoemaker. In ancient Greek one speaks of the leather worker or leather tailor when one means the shoemaker; in Latin it is called leather sewing (sutor) . This was due to the type of main footwear of the Romans, the calceus , where the main activity was sewing together the upper parts on the one hand and the upper and bottom on the other. In order to distinguish themselves from the lower-ranking sandal maker (sandalarius) , the Roman shoemakers also liked to be called calceolarius . In addition to these new footwear-producing craftsmen (today comparable in the broadest sense to bespoke shoemakers and orthopedic shoemakers) there were also the patchwork shoemakers ( sutor cerdo or sutriballus ), whose job was to mend worn shoes, and the old makers , who bought, repaired and resold worn-out shoes .

Patron saint and figures of identification

On the official holiday , October 25, the patron saint of shoemakers and tanners, Saint Crispin , is commemorated. The Nuremberg mastersinger and poet Hans Sachs , the mystic and natural philosopher Jakob Böhme and the fictional legendary figure Hans von Sagan are also considered to be identifying figures of the profession .

Wooden shoemaking was a craft that was widespread in Germany until the Second World War . The wooden shoes were part of everyday footwear up to this time.

The orthopedic shoemaker is a shoemaker who is also trained in the manufacture of shoes, shoe adjustments and orthotics according to medical indications, and has its own apprenticeship in Germany . His responsibility for orthotics ends with the knee, and the orthopedic technician is usually responsible as well.

You can also find job titles such as shoe modeller, shoe fitter and shoe technologist (especially in Switzerland). Last maker, upper leather cutter and stock maker (upper part maker) are job titles for special activities that were transferred from shoemakers to their own professions in the course of industrialization. However, these professions are again very rare in Germany today.

Duties of the shoemaker 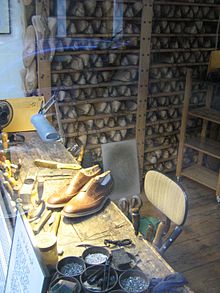 Bespoke shoemaker's workshop in Hamburg, in the background a shelf with strips

(Operated almost only orthopedic shoemakers and Maßschuhmachern) In addition to the core areas shoemaking and shoe repair part of the tasks of the shoemaker services such as high-gloss polish, creating a antique finish, removal of stains or recoloring and advising the shoe and leather care , the Advice on fittings and fit (also based on the individual wear and tear of worn shoes) and sales. Depending on the repair shop, some bag-making and saddlery work is also offered.

The training period for a shoemaker in Germany is three years (for an orthopedic shoemaker three and a half years). According to Section 7 of the Vocational Training Act, depending on previous training, the duration of training can be shortened, usually by 6 or 12 months, before the start of training. Even after the start of the training, it is possible to shorten or extend the time in justified cases.

A new training regulation has been in effect since August 1, 2018. After passing the exam, journeymen can call themselves tailor-made shoemakers .

Tools of the trade

Tools for making a double-stitched shoe.

The shoemaker's tools for making shoes have hardly changed for centuries. It was only supplemented by more efficient machines (for example, a pneumatic press eliminates the need to manually tap the sole with a cobbler or hammer). Except for the quilting machine that was used to sew the upper part of the shoe, the picture shows all the tools required to make a hand - made double- stitched shoe (from top left to bottom right):

Hammer (for tapping work), nippers (for pulling out the nails), wide nippers (for pulling the shaft over the last ), narrow nippers or pliers (for distributing the upper leather folds on the tip and heel), Kneip knife (for trimming the soles and heels ), Whetstone (for sharpening the Kneip), sharpening steel (for re-sharpening), rasp (here additionally wrapped with sandpaper, for processing the soles and heels ), bag lifter (for pulling out the nails), pointed bones (for pushing in and opening the cut), Crack opener (for clearing the cut in the sole), crack scraper (for lowering the cut), cross awl (for pre-piercing the ground seam holes), steel and pig bristles (as sewing needles), roughening (for preparing the adhesive surfaces), edge knife (for the Draining / deburring the sole edges), round awl / nail location (for pre-piercing the holes for the wooden nails), broken glass or scraper (for removing the leather grain ), cleaning wood (for pressing the so hlenkanten).

For the final work such as removing the last from the shoe (using a last hook) or cleaning and finishing the shoes, additional tools are required.

Situation of the profession

Manual shoe production: upper pinched over the last and attached to the insole (shoe viewed from the bottom)

Before industrialization, all shoes were made by hand. With the introduction of machine shoe production from around 1870, the craft, which used to have a large number of employees, declined sharply. The shoemaker journeymen employed in shoe manufacturing in the shoe factories were called "factory shoemakers" to distinguish them from their colleagues working in craft businesses. Today, the manufacture of handcrafted shoes has become very rare because it is extremely time consuming. A master shoemaker needs 30 to 40 hours to produce a handmade shoe. Shoemakers who produce shoes by hand in handicraft businesses often use the term “custom-made shoemakers” to distinguish themselves from their colleagues who work in repair shops. Shoes are also handcrafted by orthopedic shoemakers and by shoemakers who are employed in theaters or as “ballet shoemakers” in opera houses. Mainly shoe manufacturers work in the shoe industry .

Most of the shoemakers (masters, journeymen and trainees) now work in repair shops. The variety of materials there has increased significantly. In the past, leather and rubber dominated, today the different types of plastics. This diversity requires a good knowledge of the material properties and suitable adhesives and bonding techniques. Grinding and gluing work are therefore the main activities in the repair shop. In addition, sewing work is still carried out on the sole and shaft. The manual production of a pair of shoes is still part of the journeyman's examination. However, because the majority of today's shoes are glued mass-produced goods, only part of the footwear can be repaired. Most shoemakers rarely get high quality, sewn (for example welted) shoes for repair. The fashion trend is determined by sports shoe manufacturers such as Adidas , Nike and Puma .

This change, which began with the new possibilities of shoe production (AGO shoes and direct soling as a widespread design ) at least since the Second World War, and above all the massive drop in average shoe prices in recent years, pose great challenges for the shoemaking trade.

In Germany, the admission of non-masters to some craft occupations also affects the shoemaking trade. In recent years, for example, the number of shoe bars (quick repair services such as Mister Minit ) has increased and the number of master craftsmen who are increasingly concerned with the next generation have decreased. Shoemakers often seek to compensate for lost sales through non-professional activities such as engraving signs or copying keys. There is also a decline in membership in the shoemaker's professional organization (guild).

Expressed in company figures for 2007, there were 3492 shoemaking companies registered in the trade register in Germany. In addition, there were the 1,161 businesses without a master who were only allowed to carry out “simple repairs”. Taken together, there were 4724 establishments. This corresponded to a statistical mean of one company supplying around 17,000 residents. The number of employed shoemakers in jobs subject to social security contributions fell from 6929 in 1999 to 6176 in 2011. For a number of years no qualifications have been required to run a shoemaker's shop, only entry in the trade register remains mandatory. In 2013 there were 2664 companies, 75 trainees were trained in all three years of apprenticeship and 35 master craftsman examinations were held.

The Inter-Schuh-Service (ISS) is a very important international trade fair and performance show that takes place every three years in Wiesbaden , the capital of Hesse . Tanneries, machine manufacturers, specialist publishers, manufacturers of shoe repair and shoe orthopedic supplies, as well as fittings and shoe manufacturers, all exhibit there. In the accompanying exhibition, shoemakers from many countries compete with each other to win medals in various categories when the manually made shoes and special repair work are awarded. Specialist lectures round off the two-day event, which also serves to exchange information and ideas within the industry.