The title of this article is ambiguous. Further meanings are listed under Meistersinger (disambiguation) .

The Mastersingers (also Mastersingers ) were bourgeois poets and singers in the 15th and 16th centuries who formed a guild . The poems and melodies of the master song (or master song ) were derived from the minnesang , but obeyed strict rules. Master craftsmen predominated among the artists , but there were also priests, teachers and lawyers.

The singing, its verse and stanzas structure (and initially also lute accompaniment ) were taught at Meistersinger schools. The guild of singers differentiated between the grades of pupil, school friend, singer, poet and only awarded the title of master after the approval of a master song . The biblical psalmist King David was venerated as patron .

The centers of the Mastersingers were Augsburg , Nuremberg , Strasbourg and Frankfurt am Main , but there were such music guilds of craftsmen, e.g. B. also in Upper Austria and Tyrol , in Alsace , in Gdansk , Wroclaw or Prague . The regular meetings usually took place in the church or in the town hall, later also as so-called " colliery " in taverns. The seals were presented and judged by the guild management ("marker") according to the rules of the tablature. Only poets could be appointed masters who invented a new melody (" tone ", tune ) and performed it without any errors. They had their own stage in Nuremberg's Marthakirche .

The rules of master singing were intended to offer help and stimulate compositional activity, but were interpreted more and more narrowly. This tendency was caricatured by Richard Wagner in his opera Die Meistersinger von Nürnberg in 1868 - especially in the person of the strict town clerk Beckmesser , whose name became synonymous with pedantry .

The songs had a fixed scheme, the bar form : Stollen -Stollen- Abgesang . The special form of the reprise bar AABA was also common, in which the gallery was repeated in whole or in part at the end of the swan song.

Johann Christoph Wagenseil (1633–1705) wrote the work Von der Meister-Singer Holdseligen Kunst in 1697 , in which many names of Nuremberg Mastersingers have been handed down. 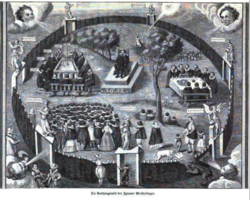 The master songs have come down to us in around 120 manuscripts from the 15th to 19th centuries. The Kolmar song manuscript (Mainz around 1480) contains around 900 song texts and 105 melodies. Although the publication of master chants was actually undesirable, the master chants contributed decisively to the transmission of folk songs , e.g. B. in the Lochamer songbook around 1450.

Reception in the 19th century 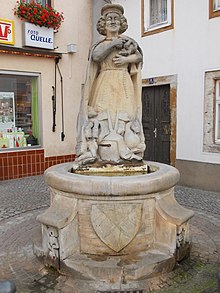