The Nikon F (in Germany: Nikkor F) is a camera from the 1960s, a small picture - SLR , which is considered the prototype of all the following professional cameras of this type. It is the first 35mm SLR camera built by Nikon .

The Nikon F was introduced in 1959 and produced until October 1973. It soon became a camera used worldwide in professional and scientific photography, also due to its modular structure. The Nikon F only had a real world first to offer (the 100% viewfinder field of view), but for the first time it combined all the advances known up to that point in one model. In 1971 it was replaced by the externally very similar Nikon F2 .

The Nikon F is the namesake of the Nikon F bayonet . It is used to connect interchangeable lenses, which has remained the same to this day.

The Nikon F builds on the following innovations from other manufacturers:

It is technically based on the professional Nikon SP rangefinder camera . In some ways the Nikon F can be described as an SP with a mirror box and a larger bayonet. What is particularly noticeable is the identical construction of the controls on the top of both cameras (quick-action lever, timing wheel, lock). The "F" of "Nikon F" was chosen from the term "Re- flex " because the pronunciation of the first letter "R" is very different in different languages.

Due to a legal dispute with the Zeiss Ikon company, cameras that were sold in Germany were called “Nikkor” for a number of years in order to avoid confusion. The name “Nikkor” was found on the housing itself (top and front panel) and on the interchangeable viewfinder. It is estimated that only 3,000–4,000 copies were made with this label and only a few still exist. These specimens are extremely rare and are considered collector's items.

The Nikon F is a purely mechanical camera. It has a horizontally running cloth slot fastener. 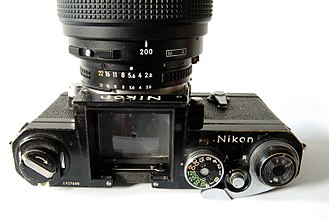 Top view with lens attached and viewfinder removed. The trigger, which is located far back, is striking.

Durable titanium roller blinds are used as closing cloths on the Nikon F. The shutter speeds are set using inhibitors. The shortest shutter speed is 1/1000 of a second, the flash sync speed is 1/60 s. Shutter speeds can only be set in whole steps.

The release button is unusual by today's standards far behind, at about the level of the film plane. The Leica bell , which is no longer common today, is used for the cable release connection. This refers to a special, bell-shaped cable release connector that is screwed over the release. This system was u. a. also used in the Edixa cameras from Wirgin . "Normal" cable releases can be used via separate adapters. The release button is surrounded by a raised ring, which is also used to set the film transport (A position) or film rewinding (R position).

In addition to the normal B setting (bulb) for long exposures , there is also the T setting, which is typical for professional cameras , which only closes the shutter again when the shutter speed dial is turned to another position. This setting saves the cable release with locking screw for the usual B setting.

The Nikon F has mirror lock-up . If the knob on the side of the bayonet on the mirror box is operated, the mirror only folds up after the next shot and remains in this position. The photographer "gives away" a picture. The problem can be circumvented by pressing the shutter button halfway. The mirror is then raised and the shutter is not released.

The mirror lock is u. a. necessary to allow the use of the three fisheye lenses available for the Nikon (6 mm, 7.5 mm and 10 mm) as well as the first 21 mm lens, the lens structure of which protrudes deep into the mirror box. In addition, the mirror lock is required when the motor is running at four images per second, as well as to avoid vibrations in micrographs or the like.

As a modern camera at the time, the Nikon F, together with the lenses built for it, has a snap-action aperture function that takes effect simultaneously with the shutter sequence. This was not something that could be taken for granted in the late 1950s.

The camera does not have an exposure meter built into the camera housing. For this, an additionally available, attachable selenium exposure meter was necessary. The exposure meter later became part of special interchangeable prism finders. The typical Nikon “fork” on the aperture ring of the lenses is used for “communication” with the exposure meters .

The Nikon F has a self-timer . This is not started via the normal trigger, but has its own small trigger button that is exposed when the lever is turned. White dots on the socket of the lever allow you to set lead times of 3, 6 or 10 seconds. Among other things, the appearance of the self-timer lever shows the respective model generation.

Rear view. The rear wall must be pulled down to change the film. The release button for the interchangeable viewfinder is located to the left of the viewfinder eyepiece.

A peculiarity of the Nikon F is its rear wall . It is pulled down together with the base plate. There is a retractable release toggle in the base plate for this purpose. When changing the film, the photographer holds two parts in his hand. The film speed can be adjusted at the bottom of the base plate . However, this only serves as a reminder without a technical function.

Variants of the F

The variants of the Nikon F are distinguished by the different prism finders.

The Nikon F Photomic FTn was the last new model of the Nikon F. 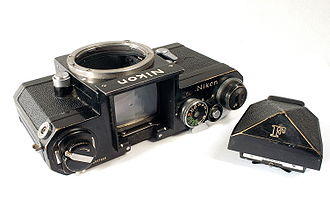 Nikkor F and Nikon F cameras in both common colors. Both with Photomic FTN viewfinder.

The system of interchangeable viewfinders is characteristic of the F series up to the F5 . To change the viewfinder, there is a somewhat difficult-to-use small release button on the back of the camera housing.

The basic version of the F was equipped with a prism viewfinder, which shows an upright and laterally correct image.

Prism finders with built-in exposure meters were called "Photomic" in the Nikon nomenclature.

The first photomic viewfinder (1962) had external measurement, the measurement angle of which could be reduced using an adapter. There was also a diffuser for light measurement . Then the first Photomic (T) for TTL exposure measurement ( Through The Lens ) appeared in 1965, whose measuring cells, now arranged in the viewfinder housing itself, measure the light hitting the ground glass. This happens in all aperture positions with the aperture fully open. The Photomic Tn (1967) measures the center of the screen from 12 mm to 60% and the edge areas to 40%. This measuring division was made possible by the construction of an aspherical condenser-lens system, controlled by a fixed aperture in front of the two CdS cells (the actual light measuring cells), which are located to the left and right of the eyepiece. The Photomic Tn was calibrated from ASA 20 to 6400. The measuring range went from light value  2 to 17 with ASA 100 with the Nikon Auto 55 mm f / 1.2. The Photomic FTn, which was delivered from 1969, has been improved, especially in terms of user-friendliness. After coupling the lens, it was sufficient to move the aperture ring once from stop to stop in order to transfer the largest opening of the lens to the light meter.

The photomics of that time work with today's AF lenses without converting the lenses (driver fork) only with a working aperture.

The sports prism viewfinder gives the photographer (even those who wear glasses) an overview of the entire viewfinder image if he has to wear a helmet or protective goggles (e.g. when skydiving or on a motorcycle ). The sports viewfinder is also indispensable for special underwater housings.

The Nikon F allows you to switch to various focusing screens that can be changed quickly. The focusing screen supplied had a cross- sectional image indicator with a measuring circle and Fresnel lens . It can be used universally up to a focal length of 135 mm. 14 different models offer the possibility of finding the optimal focus for every use (macro, architectural, aerial photography). The adjusting washers of the F2 can also be used.

The Nikon F had a motor drive , the F-36 , which was not least responsible for the fact that it was able to establish itself very quickly as a professional camera. He became a role model for competitors in the camera market. With the F-36, the Nikon F looks only slightly different than much more modern professional cameras. It has an attached battery compartment (initially external power supply), a handle with shutter release and a switch from S ( single , single image) to C ( continuous , series). The F-36 creates a frame rate of 2, 2 1/2, 3 or 4 frames per second.

A battery pack with a cable was also available. It contained eight 1.5 V batteries and an adjustable trigger for individual and series connection. It could also be used for remote control with a relay box and intervalometer. The cable battery part was delivered with a shoulder strap and cable to the motors. With the help of the relay box, connected between the camera and the battery part, the camera could be triggered over great distances or on the relay part itself.

Unlike more modern cameras, the motor cannot be attached to every Nikon F. The prerequisite is a special base plate that is suitable for engine operation, but which can easily be changed after loosening a few screws. In addition, the camera and motor must be adapted to each other, which requires a visit to a specialist workshop. The converted F can then only be used with this drive to which it was adapted. However, you can always use the camera with its normal back wall.

In addition to the F-36, there was also the F-250 motor with two large Nikon cassettes with a capacity of up to 10 m of film (equivalent to 250 exposures). The technical characteristics of the two engines were the same. To charge the 10-meter cassettes, Nikon offered a charger. The film length to be loaded could be preselected. This F-250 version was u. a. of the NASA taken into the space (as well as the corresponding successor models of F). 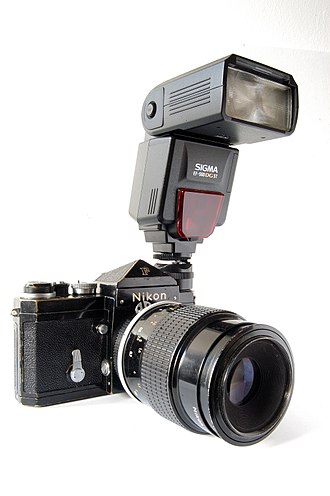 Like its successor models F2 and F3, it does not have a normal hot shoe , but a special flash connection on the rewind crank, which is typical for these models . But there was an adapter for normal center contact that was also used for the F2. This purely mechanical camera naturally does not offer automatic flash. Studio and handheld flash units can be triggered via the cable connection on the front of the camera.

Most lenses with the F bayonet can be used, but the exceptions are AF-G Nikkor lenses and DX Nikkor lenses for digital cameras with a smaller image circle and APS lenses.

Ai and AiS lenses have the typical aperture fork with which the Photomic viewfinder work. AF lenses no longer have this fork. AF lenses or AF-D lenses with an aperture ring can, however, be converted.

Collectible and today's use

View from below: The setting of the film speed is only used as a reminder for the photographer, but has no technical function. The unlocking mechanism for the rear panel is on the right.

The first Nikon F were built in 1959, with serial numbers starting with 64xxxxx. The last cameras from 1973 had 74xxxxx numbers. The correspondence between the year of manufacture and the serial numbers in some periods is random.

Since the Nikon F has always been changed in detail during the course of its construction, you can use the features of the basic housing to narrow down the period from which it originates.