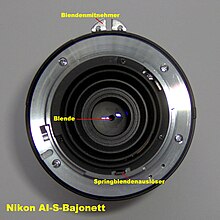 The spring diaphragm (also known as automatic diaphragm ) is a mechanism on a reflex camera and its associated lenses, which only closes the lens aperture to a preselected f-number (usually set on the lens) when the shutter is released.

The advantage of a spring diaphragm compared to a conventional, fully manual diaphragm is a brighter viewfinder image when preparing the image, since the diaphragm is fully open during all setting processes and thus allows maximum light to pass through. Due to the smaller depth of field of the faded in lens, more precise focusing is possible. In addition, cross- sectional rangefinders only work with apertures greater than ~ 5.6, so that lenses that are stopped down further make the use of this setting aid very difficult.

A mechanical or electronic shutter simulator allows for some lens series, the TTL - metering at open aperture .

Special feature of a lens with a spring diaphragm

A special feature of the spring diaphragm is that it is only possible to assess the depth of field if the diaphragm is closed by pressing a dimming button or a slide-out slide and the diaphragm thus brings the preselected setting. With modern ( autofocus ) single lens reflex cameras that do not use this control element, lenses that do not offer any other option for closing the aperture can only be used with difficulty.

Lenses with automatic diaphragm can also be with Macro Accessories like bellows and extension rings use if all the components used are adapted. Special attention must be paid to this with many camera systems, since the macro systems often do not have this function transferred in the basic configuration.