Minstrelsy (to Minne , the worship of a usually high-ranking woman; of . Mhd minne "sweet remembrance") is called the traditional writing , highly ritualized form of sung love poetry , which the Western European nobility from about the mid-12th to the mid-13 Century used.

In the German-speaking area, one can speak of a minstrel in Middle High German from around 1155 . The version of Standard German cultivated in Minnesang is the first known attempt to standardize the German literary language. It was only 400 years later that Martin Luther made the second attempt .

In the late Middle Ages (from about 1250) other species solve the courtly chivalry from minstrelsy.

The first attested minstrels are the trobadors in southern France. In modern times, the language of their songs is often referred to as Provençal , although this does not mean the Occitan dialect of Provence , but a kind of Occitan koine or literary language that takes up elements from various Occitan dialects. The minstrelsong of the Trobadors in the south of France, later also the Trouvères in northern France , had a major influence on the beginnings of German minstrels.

This influence is most clearly demonstrable on the basis of so-called counterfactures , i.e. the (German) new texting of Provencal tones (a tone is the unity of meter , stanza form and melody ). Just as clearly as in such counterfactures, the French influence becomes apparent in the recognizable efforts of German minstrels to shine artificially like the French singers with refined meter and rhyme techniques.

The linguistic art of German minnesang can, however, also be described without recourse to French influence.

Minnesang sees itself essentially as a knightly hobby and within the courtly knight culture as competition between noble knights - analogous to the other forms of competition, such as tournaments .

A knight's successful presentation of a minnie song is primarily to be understood as evidence of cultural competence - similar to a hunting success or a victory in a knight tournament in the sporting field. The song is aimed at a dear society lady ( women's service ), but is not an expression of everyday life. Biographical authenticity, as assumed by the very earliest literary research, cannot be ruled out in principle and in all cases, but it may have played only a minor role: Minnesang is not a romantic expression of emotions, nor is it an experiential poetry , but a chivalrous and ethical language and music -Ritual - comparable to the minstrelsy following in Italy Petrarchan love poetry of the dolce stil nuovo since Francesco Petrarca in the severe form of the sonnet , which now, in the beginning of the Renaissance , but no longer was up to the noble knight. 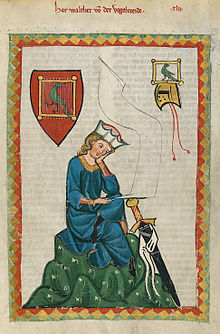 Duke Wilhelm IX is considered the first trobador . of Aquitaine (1071–1127). The art of the Trobadors reached its purest representation in the middle of the 12th century by Bernart de Ventadorn and spreads to the north (Trouvères) and east (German minnesong).

The oldest German minnesang can be traced back to the poet Kürenberger ; The hawk song in the Nibelungenstrophe is famous : “I gave myself a valken ...” (for the form of the verse see Nibelungenlied ).

This Danubian Minnesang (1150–1170, geographically: Passau , Linz , the area from which the Nibelungenlied also originates) has older German roots and is still unaffected by the refined Provencal Trobador art. He is represented by Dietmar von Aist , for example . The songs are characterized by a natural and unaffected conception of love. The peculiarities of letting women speak in first-person form or alternating between men and women are erased from the minnesang by the later Provencal influence. The outer formal characteristic is the long line , which is close to epic poetry . In a sense, German minnesang has not yet found its own form in this phase. The roots of this native miniature poetry are largely in the dark.

The new Minnesang based on the Provencal model (among other things verifiably imported by the well-traveled Friedrich von Hausen ) flourished in the Alemannic and Franconian west from 1170 onwards. From this time onwards a lyric was created that is formally much more differentiated. It is usually multi-verse and the tunnel verse is very popular at this time. In terms of content, it contains the ideal of Hohen Minne (it usually emphasizes the man's attitude of renunciation and the inaccessibility of Frouwe) as well as often a mixture of crusade and Minne themes. Representatives such as Albrecht von Johansdorf , Reinmar der Alte and Heinrich von Morungen should be mentioned here .

Walther von der Vogelweide is the first to move away from the ideal of Hohen Minne and sings songs of "equal love" ("Niedere Minne", more precisely songs of "Herzeliebe", also called "girls' songs"). However, the terms high love and low love are not contemporary - only one formulation in Walther is taken as evidence by literary studies - but rather constructs of philological reception in Romanticism , which later generations of researchers may not have adequately questioned. So it must at least remain questionable to what extent the ideal of unfulfilled love in the so-called Hohen Minne, adopted by German studies, does not represent an idea of ​​romanticism that was projected onto the period of the High Middle Ages. Heinrich von Morungen's poetry in particular does not allow just one interpretation. In any case, recent research has in some cases vigorously questioned the prevailing image (e.g. Eva Willms).

A large part of "German minnesang", that is, Middle High German poetry , is strictly speaking not minnesang and should therefore not be called that. With regard to their subject matter and their place in life , a distinction must be made between two major genres: on the one hand, the knightly-aristocratic love poetry as actual minnesong (in the narrower sense), on the other hand, the saying poetry or song poetry , which was performed exclusively by professional poets and singers and deals with political, moral and religious issues of all stripes:

Since the social status of minnesang (aristocratic representational art and luxury) and saying poetry (“utility art” dependent on payment) is different, poets rarely work in both areas at the same time. The best-known exception is Walther von der Vogelweide , who has achieved excellent results in both areas and is therefore considered the most important representative of Middle High German poetry.

Formally there are the genres song , verse and corpse :

Womens song
In the women's song, in turn, ministry is viewed from the perspective of the woman being worshiped. She accepts the ministry and expresses her regret that she - of course - has to reject it.
Alternating song
Alternating song is understood as the conversation between men and women. The speakers do not communicate with each other.
Dialogue or conversation song
The dialogue or conversation song, on the other hand, is a pure dialogue between the Minne partners, between the lyrical self and allegorical figures ( woman world ) or between fictional figures.
Day song
In terms of content, the day song is about the parting of two lovers at dawn after a night spent together. It is laid out “dramatically” and depicts the fictional couple at dawn before the inevitable separation. (We encounter the poetic design of this situation in Shakespeare's Romeo and Juliet .)
Pastourelle
A pastourelle describes the encounter of a knight or cleric with a simple girl in the open air. This is an attempt at seduction, which the girl tries to avoid.
Girl song
A break with Hohen Minne is the so-called girl's song. This type of song was particularly influenced by Walther von der Vogelweide . This type is also called lower love or attainable love .
Cross song
The Kreuzlied deals with the connection between the themes of love and the crusade . The singer contrasts an imminent or experienced crusade, i.e. his service to God, with his service to women.
Nature song
Natural songs are rarely found as pure seasonal songs. Mostly they serve as the opening of a Minne song. Depending on the intended mood, a distinction is made between Mailied , Summer Song and Winter Song .
Corpse
The corpse is the pompous form of vernacular German poetry; it is considerably more extensive and has a more complex form than the strophic song. While the same building structure and melody is repeated several times in the song (= stanza), the corpse consists of non-identical components, each with its own melody, which are switched one after the other or repeatedly. This design is called heterostrophic.
parodic forms
Towards the end of the era of minstrels, parodic forms emerged. Either they are parodies of certain poets or an entire genre.

The first printing of texts from the Codex Manesse in 1748

Title page of a luxury edition 1850

The earliest handwritten evidence of German minnesang comes from the end of the 12th century . Towards the end of the 13th century the attempt to create large “museum” collections of poetry in song manuscripts can be recognized. It is possible that these collections had predecessors in the form of repertoire manuscripts that have not been preserved by traveling singers, which have now been collected by wealthy private individuals in a quasi-literary-historical effort. The peak of the records is the pure text collection of the so-called Codex Manesse .

Almost all important manuscripts are limited to recording the texts . They hide the fact that minstrelsong, as the word quite rightly says, was always vocal poetry - in many cases more than that: As various miniatures show, the performing singers became rhythm, string and wind instruments accompanied.

In addition to these three manuscripts (J, t, W), there is sporadic, fragmentary melody material that is only notated in vague neumes or has been made accessible by counterfactures. An overall view of this material, together with the surviving miniatures and the textual statements on the performance situation, can very well convey a speaking overall picture of how minnesang was musically realized; the historically authentic reconstruction of individual pieces remains an illusion even with apparently reliable melodies. Even the best traditional melodies are limited to the reproduction of the vocal melody. Beat, rhythm, tempo, dynamics, harmony, accompanying instruments and polyphonic techniques have not yet been revealed to us.

The philological-Germanistic occupation with the texts began in 1748 by Johann Jakob Bodmer and Johann Jakob Breitinger , was mainly by Karl Lachmann , Moriz Haupt , Wilhelm Wilmanns , Friedrich Vogt , Karl Bartsch, among others, up to Carl von Kraus - its adaptation was published in 1935 by Lachmanns Des Minnesangs Frühling -, Hugo Kuhn and Peter Wapnewski into the 20th century. In addition to these scientific text editions, which have continued to be written with diachronic loyalty to this day, there were also magnificent luxury prints as early as the 19th century (two technically very complex facsimile prints of the Codex Manesse in the 20th century were also organized by Insel-Verlag). Similar to the Nibelungenlied and Wolfram's Parzival , an expressly “German cultural achievement” has been seen in German minnesang since the Romantic era, and even a model for “ethnic identity”. However, this does not match the cultural and political conditions during the reign of the last two Staufer emperors. Emperor Heinrich VI. emerged as a German minstrel himself, his son Emperor Friedrich II, the "puer Apuliae", then already maintained a poetry school at his Sicilian-Apulian court , which, with his personal assistance, made use of the minstrel heritage, but now wrote Italian poetry and during the first impulses of the Italian Renaissance finally introduced a new development via Petrarch and Dante , which extended to William Shakespeare in the early 17th century . This international rather than national significance of minstrel has been seen more strongly lately.

The world's only undergraduate full-time practical music course for European music of the Middle Ages is offered at the Schola Cantorum Basiliensis - the University of Early Music in Basel.