This article explains the politician and poet in the 14th century, for others in the family see Hugo von Montfort (disambiguation) .

Hugo von Montfort's coat of arms at the end of the manuscript cpg 329, fol. 54v

Author's signature and motto of Hugos von Montfort at the end of the manuscript cpg 329, fol. 53v 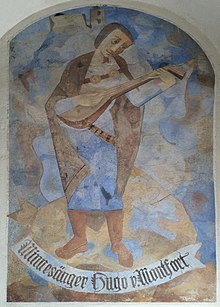 This fresco depicts the minstrel Hugo von Montfort, it is located at the Tabor in Frohnleiten.

Hugo XII, Count of Montfort-Bregenz and related to the Habsburgs through his mother Ursula von Pfirt , held numerous high administrative offices as a respected politician. He made a political career in the service of the House of Habsburg: as commander-in-chief of the ducal Austrian troops in Italy, as court master of Duke Leopold IV , as governor of Styria 1413–1415, as bailiff in Thurgau , Aargau and the Black Forest . In 1399 he acquired the Festenburg in Eastern Styria .

In contrast to other authors of the late Middle Ages, a lot is known about Hugo's life. Numerous documents and mentions in chronicles, but especially also the poems handed down under his name, are sources of his biography.

As the second eldest son, Hugo was taught with the greatest care and raised for a spiritual career, which explains how he was able to draw on theological knowledge in his work. He was also given a secular education, as evidenced by the many references in his works to contemporary and high medieval poetry. At the age of 16, in 1372 or 1373, he was married to Cilli's young widow, Hereditary Countess Margarete von Pfannberg , who brought extensive alliodal estates in Styria, Austria and Carinthia into the marriage. With this, Hugo founded the Styrian branch of the Montfort family and vastly expanded the dominion of the House of Montfort: He became heir to the castle and county of Pfannberg in the Styrian Murtal and other Pfannberg possessions. A son Ulrich comes from this connection. When Hugo's father died in 1378, the two brothers, Konrad and Hugo, shared the paternal inheritance.

After the death of his first wife, who died in 1389, he married Clementia von Toggenburg in 1395/96, who died in 1399. Shortly afterwards in 1402 a double wedding followed: Hugo married the widowed Anna von Neuhaus , his son Ulrich married their daughter Guta. In the years 1401/1402 Hugo had a final collection of his poetic oeuvre made, finally in 1414 in a second order a splendid codex for his entire collection of works. In the years 1416–1422 there is not much to be found about the count in public sources, which suggests that he spent these years on his own behalf. He died on April 5, 1423 and was buried in the Minorite monastery in Bruck an der Mur, where a memorial plaque with verses from his work reminds of him to this day: I hán do it like that when I have to do something, win :> what that hertz begerend, the mouth túts dikch say <. (35, vv. 135-138)

Hugo von Montfort is the most famous personality of his gender. His fame is not based primarily on his poetry, but on his outstanding reputation as an important politician.

Hugo of Montfort was in 1398 at the Holy grave to Jerusalem for the Knights of the Holy grave beaten, along with Oswald von Wolkenstein and Albrecht IV. Of Austria .

Acquisitions by the Montforters around Hugo

Through four successive generations, the Montfort father and son married mother and (hereditary) daughter from other (dying) families:

In the last few cases in particular, the result was a huge gain in territory, but this soon melted away under Ulrich's heirs.

Research on the poet Hugo von Montfort is in a vigorous controversy. People began to be more interested in the poet's oeuvre when the German philologists rediscovered Oswald von Wolkenstein and thus brought his contemporaries into focus. Even then, Hugo stood in the shadow of his South Tyrolean contemporary for a long time and received almost only negative reviews of his work. The greater interest was more in his life as a politician than in his work itself.

A total of 40 poems by Hugo von Montfort have come down to us in an authorized splendid manuscript, the last two poems being regarded as inauthentic, apart from one minor opinion, which sees them as a supplement to the splendor code. The poems can be assigned to typical mediaeval genres. Hugo wrote songs , poetic love letters as well as political and didactic speeches . Alongside Oswald von Wolkenstein, the noble occasional poet is considered to be one of the last representatives of German minnesong.