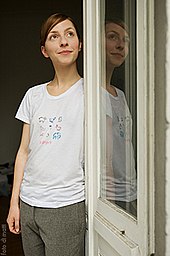 Katharina Schüttler (born October 20, 1979 in Cologne ) is a German film and theater actress .

Katharina Schüttler grew up with two siblings in Cologne. Her father is the actor, director and former theater director Hanfried Schüttler , her mother is a playwright .

After graduating from high school, Schüttler studied acting at the Hanover University of Music and Drama from 1999 to 2002 .

In 2002 she played the title role in the German premiere of the play Lolita in a production by Peter Kastenmüller at the Hanover Theater, and thus won over both critics and audiences. It followed as further theater roles a. a. Tine in Marius von Mayenburg's The Cold Child (2002; Schaubühne am Lehniner Platz , director: Luk Perceval ) and the title role in Schiller's Die Jungfrau von Orleans (Schiller) (2004; Schauspiel Hannover, director: Peter Kastenmüller).

Katharina Schüttler prefers to play radical roles in which people are torn back and forth in existential situations. She is considered an actress "with a weakness for extreme roles". For example, from 2005 to 2007 she was seen at the Berlin Schaubühne on Lehniner Platz in Sarah Kane's play Zerbombt , where she played the mentally retarded Cate at the side of Ulrich Mühe and Thomas Thieme .

For her portrayal of Ibsen 's Hedda Gabler , she was finally voted actress of the year in 2006 in the critics' poll of the magazine Theater heute . She is the youngest actress since the poll began to receive this award. In the same year she also won the Faust Theater Prize, which was awarded for the first time, in the category Best Acting Performance for this production .

The production by Hedda Gabler at the Berlin Theatertreffen 2006:

“One of the highlights of the meeting was Ibsen's 'Hedda Gabler' from the Schaubühne Berlin with the 26-year-old Katharina Schüttler in the lead role. As elegant as it is bored, Schüttler's Hedda exudes a self-confidence that, according to Theater heute , embodies 'the current state of emancipation'. Although successful in film, Schüttler remains at the theater and is well on the way to becoming the next German star. "

Her other roles at her parent company, the Berlin Schaubühne, included a. a. Ulrike in Trauer muss Elektra (2006; director: Thomas Ostermeier ) and the title role in Kleist'schen Penthesilea (2008; director: Luk Perceval ).

At the age of eleven, Katharina Schüttler was already in front of the camera for film and television productions. She made her film debut in 1992 in the feature film Die Lok , where she starred alongside Rolf Hoppe in the role of "Spange". In the RTL hospital series Stadtklinik she was seen from 1994 to 1996 as Lena Grüner in a recurring series role.

In 2009 Katharina Schüttler and Matthias Schweighöfer were seen as the Reich-Ranicki couple in the biographical television film Mein Leben - Marcel Reich-Ranicki . Marcel Reich-Ranicki praised the “brilliant cast” and the “fabulous” play of the leading actors. For her performance in the film The day comes , in which she played one of the leading roles alongside Iris Berben , she received the Bavarian Film Prize 2009 for best young actress. In 2010 she was awarded the Ulrich Wildgruber Prize .

In Police Call 110: Strangers in the Mirror (first broadcast: November 2010), Katharina Schüttler played the role of the young police student Christine Teichow, who suffers from a borderline personality disorder and fakes her own death. In 2012 she took on the role of the manic-depressive Rieke Hollstein in Bloch: Heißkalte Seele (first broadcast: November 2012), whose friend Benno Pflüger ( Christian Näthe ) turned to the psychotherapist Dr. Maximilian Bloch ( Dieter Pfaff ) turns. In 2013, she played the role of Greta Müller and was one of the main actors in the three-part television film Our Mothers, Our Fathers on ZDF, and in the same year she was in as fishing wife Ilsebill, who, through her husband, the fisherman Hein, wants more and more of an enchanted flounder to see the fairy tale film Vom Fischer und seine Frau . In the movie Freier Fall (2013), which tells the love story between two policemen ( Max Riemelt , Hanno Koffler ), she was the pregnant friend of one of the policemen who believes she is losing her boyfriend, who discovers his homosexual inclination, to her lover. In 2014 she was seen in Matthias Schweighöfer's movie Vaterfreuden as Betti and in the role of the first German chemist Clara Immerwahr in the television film of the same name . In the feature film Grzimek , which premiered on April 3, 2015 on Das Erste , she played the role of Bernhard Grzimek's daughter-in-law Erika Grzimek, who he later married, alongside Ulrich Tukur . In Alain Gsponer's film Heidi (2015), Schüttler was seen in the role of the strict Fraulein Rottenmeier.

Schüttler is a member of the German Film Academy and the German Academy of Performing Arts .

Katharina Schüttler is married to the director Till Franzen . They have two daughters together and live in Berlin-Prenzlauer Berg .