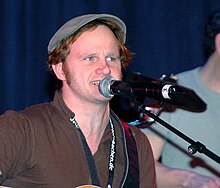 Christian Näthe (* 1976 in Potsdam ) is a German actor , guitarist and singer in the band Hasenscheisse .

Christian Näthe grew up in Potsdam. At the age of 13 he was cast by Karola Hattop for the role of young Rainer in the DEFA children's film Feriengewitter . At the same time he took up his first synchronized work for the GDR traffic education program Verkehrskompaß .

In November 1994 he starred in the leading role of 16-year-old Christoph Hansen from Hamburg in the ZDF television film Unschuldsengel , directed by Rainer Kaufmann . This was followed by the role of Harald in the ZDF children's series Secret - or what ?! , as well as DJ Andi Berkahn in the series Mensch, Pia! . He had another recurring series role in a total of twelve episodes of the ARD series Gegen den Wind . In July 1997 Näthe could be seen in the Dresden crime scene as Lothar Wagner and in Polizeiruf 110: He played the horse murderer alongside Eduard Burza as his brother. In bitter suspicion of the crime series Bella Block , he took on one of the main roles of the episode as a student Benedikt Bartels. In 2004 the figure of the pianist, composer and piano maker Andreas Streicher followed in the television film Schiller .

In the movie Der Baader Meinhof Complex he took on the role of Jochen and in the espionage drama alias Luna he played alongside Anna Maria Mühe and Götz George . In the Bloch series , Näthe took on the role of Benno Pflüger in Heißkalte Seele and that of the sailor Kolkmann in Berengar Pfahl's ARD two-parter The Men of Emden . In the successful cinema comedy Fack ju Göhte he was seen in a supporting role as a biology teacher. 2015 followed a role in Four Having a Child and 2018 in Real Farmers Sing Better . In the same year the role of Hauptmann Heym in the movie thriller Ballon followed .

Together with his friend Matthias Mengert, Näthe founded the band Hasenscheisse in the mid-1990s , where he is guitarist and singer as "Chrischi". His song Kleines Sauberes Städtchen, which he wrote for his hometown, was very popular in November 2019.