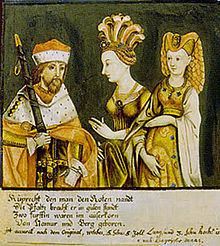 Elector Ruprecht I with his two wives; Elisabeth von Namur in the middle, Beatrix von Berg on the right. The picture bears the motto: "Ruprecht whom one calls the Roten, he brought the Palatinate into good standing, two princesses were chosen for him, born of Namur and Berg."

Ruprecht I as the founder of the church, with the model of the Neustadt collegiate church , sculpture by Hubert Netzer , 1910

Ruprecht I, the Red, of the Palatinate (born June 9, 1309 in Wolfratshausen ; † February 16, 1390 in Neustadt an der Weinstrasse ) was Count Palatine and Elector of the Palatinate (1329-1390) and founder of the University of Heidelberg .

Ruprecht von der Pfalz's parents were Rudolf I, Duke of Upper Bavaria and Count Palatine of the Rhine and his wife Mechthild von Nassau, daughter of King Adolf von Nassau . Through his father, Ruprecht also descended directly from Rudolf von Habsburg , the founder of the dynasty of the same name, who was his great-grandfather.

The father died in 1319 when Ruprecht was only 10 years old. After his death he stood with his mother and his brothers Adolf († 1327) and Rudolf II under the tutelage of Count Johann von Nassau. Ludwig IV "the Bavarian" took possession of the Rhine Palatinate on the basis of the armed force treaty concluded with his brother Rudolf I on February 26, 1317. The war ended in August 1322, but only after Mechthild's death in June 1323, whose hatred of Ludwig IV had made a permanent reconciliation impossible, did a reconciliation come about between him and the three nephews.

In the house contract of Pavia , Ruprecht and his brother Rudolf II achieved in 1329 with their uncle Ludwig the Bavarian that the Palatinate became an independent principality. At first both ruled the territory together with their nephew Ruprecht II and in 1338 they divided their principality. They took turns perceiving the votes of the Palatinate as the electorate; on Kurverein of Rhense Ruprecht had participated in the election Günther of Black Petersburg Rudolf, however, had led the electoral vote. In 1349 the two brothers supported Günther von Schwarzburg as the antagonist to Charles IV. It was not until February 1350 that the Wittelsbachers also recognized Charles IV as the new king and committed to delivering the imperial regalia to him .

When Ruprecht inherited Rudolf's property in 1353 after Rudolf's death and became the sole Count Palatine near the Rhine, Karl dissolved part of the Upper Palatinate from this rulership and incorporated it into the Luxembourg possessions as New Bohemia . For the election of Wenceslas as Roman-German king in 1376, Ruprecht again received substantial payments and large areas from Charles IV, including Oppenheim , Nierstein , Ingelheim and parts of Bolandens . Ruprecht also acquired Kaiserslautern in 1357 and, starting from Bolanden, almost the entire county of Zweibrücken until his death .

In 1356, the Palatinate was given the right to vote to elect the Roman King , the Kurrecht , through the Golden Bull (hence the name Kurpfalz). Ruprecht was one of the members of the Urban Federation from 1379 , in which the four Rhenish princes the interests of Pope Urban VI. wanted to represent in the Regnum Teutonicum, which also served to strengthen their own positions of power.

The Allgemeine Deutsche Biographie characterizes the important ruler as follows:

“Even among his contemporaries, Rupprecht I was in high regard, outwardly he was a figure that commanded respect, a chivalrous appearance. With ruthless activity he was considered a mild, benevolent gentleman, a patron of the church and the priesthood, a friend of widows and orphans. The Jews, whose financial power he knew how to make excellent use of, honored in him a just, humane protector. "

Without having attended secondary school, Elector Ruprecht was nevertheless educated and religiously interested. The historian Ludwig Häusser remarked: "With Ruprecht any school knowledge was outweighed by a great practical talent and replaced by an open mind for everything spiritual." So he had the world chronicle of Rudolf von Ems and a biography of St. Elisabeth as precious parchment manuscripts manufacture. For him and his wife Elisabeth von Namur , 62 sermons by the Franciscan Berthold von Regensburg were specially recorded. He personally set the prayers for the hours of the day and night for the monastery he founded in Neustadt an der Weinstrasse . In the founding deed in 1356, he named as a motivation, in addition to the ostensible purpose of the burial place and memoria, the concern for a solemn, frequent and godly worship service. For many years Ruprecht I always made a pilgrimage on patronage day to St. Michael's Monastery on Heidelberg's Allerheiligenberg to offer his donations.

The elector had a Jewish personal physician named Gottlieb, whom he held in high esteem, just as he offered protection to the Jews in his country in the event of persecution and welcomed them willingly.

Foundation of the University of Heidelberg 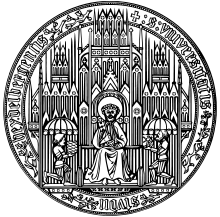 Seal of the University of Heidelberg from 1386. Ruprecht I kneels to the right of St. Petrus, with the Palatinate lion coat of arms.

On October 1, 1386, Elector Ruprecht I founded the University of Heidelberg named after him ; it still exists today, making it the oldest university in what is now Germany. The main reason for its foundation by the ecclesiastically committed elector was the occidental schism of 1378: After the death of Pope Gregory XI, who returned to Rome from Avignon . mainly French cardinals ignored his Roman successor Urban VI. and in the person of Clement VII they elected an antipope suitable for France. Therefore, France and the Sorbonne University in Paris, which is heavily frequented by Germans, stood on the side of the Avignon Pope , while the Electoral Palatinate emphatically supported the Roman Pope and did not allow supporters of the opposing party to hold spiritual offices. The University of Prague was also on the side of Rome, but they were dissatisfied with the curriculum there; In addition, the aim was to spare the students from the west of the empire the long journey and the expensive stay. In this situation, Elector Ruprecht I decided to found a Palatinate University in Heidelberg, supported by the learned clergyman Marsilius von Inghen , who represented the same positions. The university opened on October 18, 1386 with a solemn mass, and lectures began the next day. The university seal that has been preserved from that year - which Heidelberg University still has as its logo - depicts the cause and program of the foundation: In the middle, St. Peter sits on a throne, holding a powerful key, as a symbol of the papacy. Elector Ruprecht I, with a beard, kneels to the right and holds out the Palatinate coat of arms with the lion in homage to him. To the left of the Prince of the Apostles, the co-regent and electoral successor Ruprecht II kneels , who also presents the Wittelsbach diamond coat of arms to Peter. 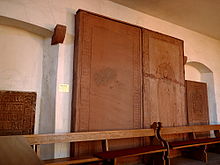 The epitaphs of Ruprecht I and his wife Beatrix von Berg , in the collegiate church in Neustadt / Weinstrasse

The graves in their old state in 1906. Beatrix on the left, Ruprecht I. on the right

The opened graves in 1906. Beatrix on the left, Ruprecht I. on the right

In 1350, Elector Ruprecht I of the Palatinate married Countess Elisabeth von Namur (1330-1382), daughter of Count Johann I of Flanders and Namur from the Dampierre family and his wife Countess Marie von Artois. The marriage remained childless.

Ruprecht died in 1390, he was succeeded by his nephew Ruprecht II.

In 1356, Elector Ruprecht I, based on the will of his predecessor and brother Rudolf II. , Founded the Liebfrauen Collegiate Foundation in Neustadt as a memorial for the family. To this end, he had the parish church of St. Aegidius rebuilt and expanded to the east with a magnificent choir. The choir area of ​​this new church, today's Neustadt collegiate church , was built in 1368 according to a pillar inscription. Elector Ruprecht and his second wife Beatrix von Berg were buried there .

Both graves and epitaphs are still preserved. The graves are located in the center aisle of what is now the Catholic choir of the collegiate church, marked with modern bronze inscriptions. The historical cover plates were removed from the floor to protect them and placed - standing upright - on the back wall of the Catholic part of the church (partition wall to the Protestant area). When the grave was opened in 1906, a shaft made of sandstone was found in which the coffin, made from a single hollowed-out oak trunk, stood. Inside were the bones of the Elector and the remains of the Franciscan costume in which he had been buried as a member of the Third Order of St. Francis .

Around 1910, the parish priest Dr. Michael Glaser (1863–1915) made four large statues of the Palatinate rulers Rudolf II and Ruprecht I, who were buried here , as well as the wives Beatrix von Berg and Margarete von Sicily-Aragon , who were buried at their side . They were created by the renowned Munich sculptor professor Hubert Netzer from white Kelheim limestone and are located on the north and south walls of the nave of the Catholic church. The sculptures in the style of historicism are based on old representations. As a founder, Elector Ruprecht I carries the model of the Neustadt collegiate church in his hand.

Since 2010, two Wittelsbach masses have been held annually in the Neustadt an der Weinstrasse collegiate church , at which the double grave of the church founder, Elector Ruprecht I, and his wife Beatrix von Berg are solemnly blessed.