Monument by Anton Kaindl in Kochel am See 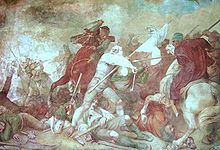 The Sendlinger Bauernschlacht 1705, detail from the Sendlinger fresco by Wilhelm Lindenschmit the Elder (1830)

Storming of the Red Tower in Munich by the blacksmith von Kochel on Christmas morning 1705; Painting by Franz von Defregger (1881)

The blacksmith von Kochel is a legendary figure from Bavarian history who is seen as a folk hero, especially in Upper Bavaria. Legend has it that he was a soldier in the Great Turkish War . Armed only with a pole, he is said to have rammed the city ​​gate of Belgrade . The blacksmith had refused a reward offered by the elector for his heroic deeds.

During the occupation of Bavaria by imperial troops of the Habsburgs Joseph I in the War of the Spanish Succession , he is said to have been one of the leaders of the peasant uprising that culminated in the Sendlinger Murder Christmas (1705). In literary terms, the blacksmith von Kochel is described as a man of great stature and strength, over 70 years old. For the uprising he is said to have made himself a club that weighed over a hundred pounds and was studded with nails. On the evening of the massacre at the old parish church of Sendling , the blacksmith fought in the ranks of the rebels against the occupiers and is said to have - heroically - been the last man to die.

Historical research has shown that the von Kochel blacksmith is very likely not a real person, but just a legend that was created to make defeat more bearable. Balthasar is mentioned as the blacksmith's first name , and Mayer or Riesenberger as surname . There was actually a Balthasar Mayer (born January 6, 1644 in Waakirchen ), but he is neither documented as a blacksmith nor as a participant in the uprising.

A proven participant in the battle in Sendling was the blacksmith Balthasar Riesenberger (* in Bach near Holzolling, today the municipality of Weyarn ). It is unclear whether he was the model of the legendary figure and how the transfer to Kochel took place. Against any reference to Kochel, the fact that the judicial district of Murnau , to which Kochel belonged at the time, did not take part in the Oberland uprising.

In memory of the Sendlinger Murder Christmas and the blacksmith von Kochel, festivals and events on this topic are held regularly in Bavaria.

The blacksmith von Kochel in art

In 1851 the three-act Schmied von Kochel by the Munich author Felix Prüller was premiered. With 51 performances, the piece was a great success. Prüller revised it twice under the titles Die Christnacht in Munich in 1705 and The two Hafner, father and son .

Prüler's works were later forgotten; it was not until 1873 that the material was taken up again by Michael Schuster, a carpenter from Benediktbeuern . His Der Schmied von Kochel was known as a glass cobbler piece and premiered in 1874. After further performances in Kochel am See in 1883 and 1884, a group of amateur actors formed in Kochel who wrote the story of the blacksmith von Kochel as their main focus. In the years 1898, 1899 and 1900 the piece was performed over 50 times. The proceeds were used for the construction of the Schmied-von-Kochel monument on the Kochel village square (inaugurated on May 27, 1900).

Supported by the zeitgeist of the time, other dramas were created around the topic, such as a five-act play by the Tölz historian Prof. Johann Nepomuk Sepp or the drama Lieber bayerischdie die in three acts by Karl Frey and Wilhelm Hagen, which were not performed.

In 1911, the popular drama of was Josef Ruederer in Munich premiere, where the critics panned was. As a result, interest in the blacksmith von Kochel waned, and an attempt at resuscitation in 1928 also failed. It was not until May 8, 1938, that a blacksmith play was performed again in Kochel with the homeland game Schmied Balthes , which ran until the outbreak of World War II in September 1939.

For the 250th anniversary of the Sendlinger Murder Christmas, Der Schmied von Kochel was played again for the first time after the war in 1955 . After a new production in 1980, the Kochel actors formed a theater association.

The director Ernst Scheberg processed the legend about the blacksmith into the two-part silent film The Tragedy of a People (Der Schmied von Kochel) , which was released in 1922. In 1929 he brought the recordings back to the rental market as Der Schmied von Kochel (A Hero of the People) .

There are monuments to the blacksmith von Kochel on the village square of Kochel am See and in Munich-Sendling .

The Kocheler sculpture is a larger than life cast iron statue on a rock foundation. The memorial was created by Anton Kaindl and inaugurated on May 27, 1900.

Opposite the parish church of St. Margaret in Munich-Sendling, on the edge of the Isar slope at the end of Lindwurmstrasse, there is a bronze statue of the blacksmith on a stone substructure with a fountain and a staircase to the Isarhchterrasse. The erection of the statue was suggested in 1904 by the archivist Ernst von Destouches . The foundation stone was laid in 1905. The design of the sculpture was done by Carl Ebbinghaus , the architecture of the entire monument was done by Carl Sattler . The inauguration took place in 1911.

The Mainz painter Wilhelm Lindenschmit the Elder painted the blacksmith in 1830 as the dominant figure of a fighting old man in the center of his fresco on the Sendlinger church.

A popular and frequently reproduced painting by the blacksmith von Kochel was created by Franz von Defregger in 1881 .

The Bavarian monarchist resistance movement, called the Harnier Circle , used the blacksmith von Kochel as a "signatory" for their pamphlets.