The old parish church of St. Margaret in Untersendling (today: district 6 Sendling in Munich ) is an art-historically interesting and historically significant church building in the style of Upper Bavarian - Baroque village churches. The church is dedicated to St. Margaret of Antioch .

The building on the slope edge of the Isar terrace on Lindwurmberg (Plinganserstraße 1, corner of Lindwurmstraße ) was built from 1711 to 1713 according to plans by Wolfgang Zwerger . The church is the successor to an earlier, probably Gothic church, which was so badly destroyed during the Sendlinger Murder Christmas ( Sendlinger Bauernschlacht ) in 1705 that it had to be rebuilt. Remnants of the medieval building fabric were probably mainly used in the tower. The only preserved glass painting from the previous building was placed in the left apse window , it is signed and dated " Lienhart Ötl 1493 ". The church was renovated in 1935/36, 1964/65 after bomb damage had been removed, and 2003–05 in preparation for the three hundredth anniversary of the peasant battle.

The church seen from the south

Towards the end of the “Sendling Murder Christmas”, some insurgents managed to make their way to Sendling, where they again entrenched themselves. Shortly afterwards the imperial troops also took up positions here. The rebellious Oberlanders surrendered and laid down their arms. The imperial officers only seemingly granted pardon and had the disarmed revolutionaries slaughtered on the spot .

Some of the last survivors fled to St. Margaret's cemetery in the hope that the imperial troops would respect the consecrated district at least on Christmas Day and not attack there. But here, too, the occupiers showed no mercy and killed everyone; the church was more or less completely destroyed and Sendling was plundered . The legendary " Schmied von Kochel " is said to have fallen as one of the last defenders . Very few of the rebels managed to escape.

The church has a pilastered articulated four-axle nave with an attached 3/8 choir under a shared hipped roof , which has been covered with wooden shingles since the most recent renovation , as it was probably when it was built. The tower with a square floor plan is built into the neo-baroque west facade opposite the choir , it is octagonal on the upper two floors and crowned by a dome with a lantern . The gable wall is decorated with a relief tondo by Friedrich Kühn with the Resurrection Christ , above it a Pope's coat of arms.

A two-room sacristy and a porch porch are added to the south side . 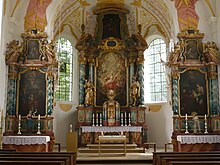 The main room is rectangular with a flat ton with lunettes , by laying on flat pilasters -engaging belt bow is divided, the arch has a large, colored aggregate Stuckierung of Peter Franz APPIANI on.

The high altar with St. Margaret from 1712 comes from Franz Fröhlich, the wooden figures on the side show St. John and George .

The pulpit on the first pillar of the south wall is by Ignaz Johann Gräßl , the figure of Salvator mundi is in turn by F. Fröhlich and the apostles are also attributed to him.

In the apex of the vault there are (partly painted over) frescoes , which are attributed to the style of Caspar Gottfried Stuber , who probably painted them together with his son Nikolaus Gottfried Stuber in 1712 . The frescoes show (from east to west): Maria Immaculata, God the Father in the creation of heaven and earth, a " holy spirit hole " surrounded by a halo of angels , the fall of man and redemption, (above the organ :) Christ as judge of the world ( youngest Court ).

"The Peasant Battle of Sendling 1705" , fresco by Wilhelm Lindenschmit the Elder. Ä. on the north facade (1830)

A large fresco by Wilhelm Lindenschmit the Elder is placed on the northern outer wall under a gable roof above the portal . Ä. from the year 1830 the Sendlinger Bauernschlacht 1705. The fresco and the rest of the church building were thoroughly restored in 2003-04 in order to be prepared for the 300th anniversary of the uprising at Christmas 2005.

The organ in the old Sendlinger church 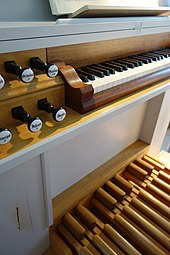 The organ was built in 1860 by the organ building company Max Maerz (Munich) and is one of the largest preserved organs by Max Maerz, the founder of the Munich organ building dynasty at the beginning of the 20th century. In the 1960s the organ was rebuilt, a second manual was added and the original structure was partially destroyed. During the restoration in 2006 by the Alois Linder company (Nussdorf a. Inn) , the console , action , pedal tray, wind system and the original layout were reconstructed. It is a mechanical slide organ with a total of 12 registers.

The disposition is as follows:

The church seen from the north-east ( Lindwurmstrasse ), in the background the tower of the new parish church of St. Margaret

The old parish church of St. Margaret is a typical Upper Bavarian-Baroque village church with unimpaired, homogeneous furnishings from the time it was built.

In addition, the church, or rather the place on which the previous building stood, is historically significant as the scene of the last skirmishes at the Sendlinger Murder Christmas, in which 1,000 people, mainly farmers and petty bourgeoisie from the Oberland were slaughtered by Austrian occupation troops. Another seven hundred were captured, some of which were later executed. On the imperial side, about 40 dead and wounded were counted. Between one and two hundred of the victims are buried in mass graves in the cemetery; a classicist monument from 1830 commemorates them. Several hundred dead found their final resting place in the old south cemetery outside Munich near the Sendlinger Tor .

The fresco by Lindenschmit above the northern portal shows the first known depiction of the legendary folk hero, who was described by Hans Ferdinand Maßmann in 1831 as "Smith of Kochel" and whose real existence is uncertain. Various names are assigned to him ( "Balthasar Riesenberger", "Balthasar Schmied", "der Schmied-Balthes" , and others), but the blacksmith who was actually working in Kochel at that time was called Georg Heinrici and did not die until around 1720.

Monument to the "blacksmith von Kochel"

Opposite the church on the other side of Lindwurmstrasse is a memorial to the legendary "Blacksmith von Kochel" who, according to myth, was gigantic and already 70 years old when he was entrenched in the churchyard of St. Margaret Morgenstern in the right hand (on the fresco, the sculpture carries a blacksmith's hammer) and the insurgent flag in the left hand bravely resisted until the end. The monument with fountain was initiated in 1904 by the archivist Ernst von Destouches , and the foundation stone was laid in 1905 at the 200th anniversary ceremony in the presence of the Prince Regent . The sculpture was designed by Carl Ebbinghaus , the architecture by Carl Sattler . The completed monument was inaugurated in 1911.