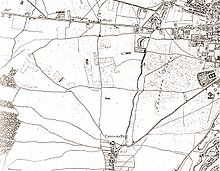 Course on a historical map from 1812

The Lindwurmstraße is a 2.4 km long poplar avenue in Munich districts Ludwig-Isarvorstadt and Sendling .

The Lindwurmstrasse runs one kilometer northwest parallel to the Isar and mostly flat at an altitude of about 520  m above sea level. NN from Sendlinger Tor in a south-westerly direction. Between the Poccistraße and Implerstraße they pass under a subway to Munich South Ring , a railway line, the south of the center of the Munich East train station to the Munich Central Station and the rail yard Laim combines. Only shortly before its southern end in Munich- Sendling does it rise on Pfeuferstrasse to 534  m above sea level. NN to.

Well-known residents are u. a. the hospital of the University of Munich , the Haunersche Children's Hospital and the churches of St. Matthew and St. Margaret .

The Bavarian original cadastre shows Lindwurmstraße in the 1810s as a then unnamed road , which with a deciduous tree that was planned on both sides leads past Burgfriedstein No. 2 to Untersendling . In the 1860s it was crossed by the railway line and to the north-east of it a nameless street village emerged on its course .

It was formerly called Sendlinger Landstrasse. The "old road to Sendling" was renamed in 1878 after the doctor Joseph von Lindwurm (1824–1874, dermatologist and chief physician).

House no. 127 (then 125), now a branch of the Munich Adult Education Center , served the Jewish community as emergency accommodation because the National Socialists had the synagogue and community building on Herzog-Max-Strasse demolished. In 1941 there were deportations.

Until 1975 tram lines ran through Lindwurmstraße, which were discontinued after the underground railway was extended from Goetheplatz to Harras .

Today, Lindwurmstrasse is part of the Ludwigsvorstadt-Isarvorstadt cultural history trail .

Numerous buildings along Lindwurmstrasse are protected as architectural monuments, for example: 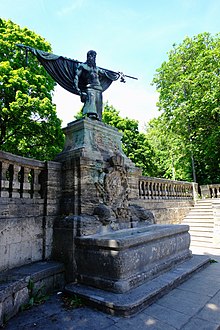 Lindwurmstraße has been expanded to four lanes for road traffic and has designated cycle paths in both directions, lined with tall poplars.

The public transport opens up the road at the metro station Sendlinger Tor , Goetheplatz and Poccistraße with lines U3 and U6 . The bus routes 62 and 132 as well as the night bus routes N 40, N 41 and N 45 also operate there on partial routes .