Rider on a horse in the Bavariapark in Munich 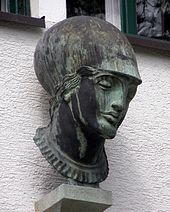 Head of Minerva at the Otto Suhr Institute in Berlin

His most famous works in Munich include the memorial to the blacksmith von Kochel (1906–1910) in Lindwurmstrasse in Sendling and the Allegory of Fantasy , also: Rider on a Rising Horse (1907/1908) in Bavariapark in the Schwanthalerhöhe district . Ebbinghaus worked with the Munich architect Carl Sattler on the Sendlinger Fountain Monument and later several times .

As an early member of the German Association of Artists , Ebbinghaus can already be found in the list of members of the 3rd annual exhibition in the Grand Ducal Museum Weimar in 1906 , where he showed the bronze sculpture The Giant and a silver statuette. In 1906 and 1908 he exhibited in the Kunsthalle Bremen .

In the 1920s, Ebbinghaus lived in Berlin-Dahlem (now part of Berlin-Schmargendorf ; Rheinbabenallee 44) in a house built by Alfred Breslauer & Paul Salinger . During his time in Berlin, Ebbinghaus was assigned to the Free Secession Berlin .

Ebbinghaus' bust head of Minerva can also be found on the institute building of the former Kaiser Wilhelm Institute for Anthropology, Human Heredity and Eugenics in Berlin-Dahlem, built between 1926 and 1927 (today used by the Otto Suhr Institute of the Free University of Berlin) referred to as the goddess Athena wearing a helmet , for whom the popular actress Henny Porten is said to have sat as model.

As a medalist, Ebbinghaus created the first version of the Karmarsch commemorative coin donated in 1925 by the Hannoversche Hochschulgemeinschaft (today: Leibniz Universitätsgesellschaft Hannover eV). Coins created by him can regularly be found in stores.