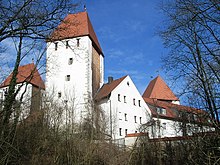 View of the outer bailey

Neuburg am Inn Castle from Wernstein ; the outer bailey on the right, the main castle on the left

The Neuburg am Inn Castle is located in Neuburg am Inn near Passau in Lower Bavaria . The castle towers across from Wernstein Castle high above the Inn Valley on the border with Austria . It was once the seat of the immediate imperial county of Neuburg .

The castle was built in 1050 by the Counts of Formbach a few kilometers down the river from their ancestral castle. Since then they have named themselves after Neuburg. After their extinction, the castle came to the Counts of Andechs in 1158 , before it became the property of Bavaria in 1248 . From then on, the duchies of Bavaria and Austria fought over the strategically located fortress. There were constant changes of ownership. In 1310 the castle was destroyed in the Bavarian-Austrian conflict. Today's building stock comes largely from the subsequent reconstruction by the victorious Austrians.

Since then, the Neuburg belonged to the Habsburgs , who pledged it, until Hanns von Rohrbach acquired the castle in 1463 and the expansion began, which his successor Sigmund von Niederthor continued. Due to his services in successfully defending against the first Turkish siege of Vienna , Neuburg Palace and County were awarded as an imperial fief to the imperial general Niklas Graf Salm (1459–1530) in 1529 and he became the ruling Count Nikolaus I of Salm-Neuburg . However, he died a year later. He was succeeded by his son Nikolaus II (1503–1550), who had the castle redesigned in the Renaissance style by the Passau builder Wolf Huber and laid out extensive gardens. During the renovation work, only the keep, the fortifications of the outer bailey and the castle church remained untouched.

The county of Neuburg am Inn 1674; Engraving by Georg Matthäus Vischer

The Counts of Salm-Neuburg held the palace and the county of Neuburg until 1654. In 1654 it was redesigned in the Baroque style by the new owner, Count Georg Ludwig von Sinzendorf . The gardens were also expanded, right down to the Inn. In 1680 the castle was confiscated from the imperial court chamber in Vienna after Georg Ludwig von Sinzendorf was charged with high treason and other offenses. In 1698 the castle and the county were mortgaged to the Scottish nobleman Jakob von Hamilton for a period of 10 years, and in 1701 he finally received it. His son sold Neuburg in 1719 to the Counts of Lamberg-Sprinzenstein. From these the castle and the imperial rule came in 1730 through Cardinal Joseph Dominikus von Lamberg to the bishopric of Passau , with which it remained until its secularization in 1803. Three years later, Bavaria sold the castle. After that it belonged to changing private owners and associations. In 1810 it was badly damaged by fire. The reconstruction of the Neuburg was carried out in 1908 by the Bavarian Association for Homeland Security and the Passauer Kunstverein.

From 1973 the castle was the seat of the "European Academy Neuburg". From 1982 the castle stood empty and the administrative district of Lower Bavaria began with renovation measures. 1986-1988 of Passau briefed the below the castle in Ökonomiehof county hall one. In 1989 the association built a meeting center for science at Schloss Neuburg a. Inn converted the old malt house into an accommodation building. In 1996 a 4-star castle hotel, a gourmet restaurant and a beer garden were established. The castle complex has belonged to the Passau district since 1998 ; after extensive renovation work, the castle now has 15 conference and event rooms and is now used as an international meeting center for the University of Passau , as a conference venue for the Passau district council and as a gallery for artists from the district. The entire institute for market and economic research of the University of Passau is located in the main castle .

A tower of the outer bailey

The castle consists of the outer ward , the main castle with rooms and upper room and the courtyard Taferne .

The path to the outer bailey leads from the north through the flower garden with grotto. The castle is surrounded by a curtain wall, which is reinforced with three corner towers and a gate tower. Their original height was later reduced and only the northeast tower from around 1400 was left. 1985 to 1988 the other towers were rebuilt. In the inner courtyard there are farm buildings from 1599, which were increased in 1738.

A bridge from 1707 leads to the main castle. The Gateway Building was built according to the inscription 1484. Above it rises the keep . The Gothic castle chapel dates from the 14th century. The Renaissance portal , which is the entrance to the so-called beautiful halls , shows the oldest Renaissance decor north of the Alps. In the Salettl there are frescoes by Fritz Seitz from 1537. Other halls are the great knight's hall , the white marble hall and the red marble hall .

In the baroque garden from the second half of the 17th century there are several Callot figures, so-called Salzburg dwarfs. The garden pavilion with shell grotto from 1664 is the work of Batista Carlone and Giovanni Sforzza. There is a circular path through the forest around the castle complex.

South of the castle is the so-called women's shelter , the ruins of a ring-shaped complex from the 14th century. On a hill above the opposite bank of the Inn there was the Wimberg castle stable as an outpost of the Neuburg Castle .

List of castles and palaces in the district of Passau