The county of Neuburg am Inn with the castles Neuburg and Wernstein by Georg Matthäus Vischer from 1674. 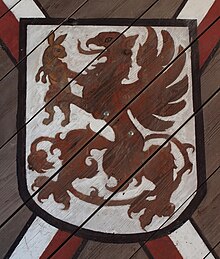 Coat of arms of the county of Neuburg am Inn depicted on the outer castle gate of Neuburg .

The county of Neuburg am Inn emerged from the Count's rights of the Formbachers . They moved their headquarters from their namesake headquarters in Vornbach a few kilometers up the Inn. There they built the fortress Neuburg around 1050. Soon there was a line of the Formbach house, which was named after the festival. At that time, the county's wealth was based on the tolls of the Inn's shipping trade .

In the following years, the Formbachers lost more and more influence in the Lower Bavarian and Upper Austrian region around the Inn. First they lost rich possessions south of Passau and north and south of the Danube due to their loyalty to the Pope in the investiture dispute in 1077 by Emperor Heinrich IV and in 1144 the line to Formbach-Viechtenstein died out. Much of their property was lost to the Counts of Wasserburg and the up-and-coming Counts of Ortenburg . Only the property around Neuburg am Inn was retained by the Formbachers. In 1158, however, the last Formbacher, Ekbert III, died. von Neuburg, the hero's death before Milan.

Heirs of the county of Neuburg am Inn and the rest of the Formbach possessions were made by the powerful Andechs family . In the course of time, however, the Ortenburgers and their followers appropriated the remaining former Formbacher's possessions between the Danube and Inn. Only the county of Neuburg remained with the Andechs. However, in the 12th century the county lost its former supremacy between the Danube and Inn.

In 1248, the Andechser family died out and their inheritance fell to the Bavarian dukes from the Wittelsbach family . In the following years, they also acquired the possession of the Ortenburgers and thus became an influential power in Eastern Bavaria. In the following years Neuburg was to become a bone of contention between the duchies of Bavaria and Austria due to its important strategic location .

In 1283 King Rudolf I of Habsburg took possession of the county. The situation did not change, however, the Bavarian dukes tried to regain the lost county. In 1309 the Bavarians succeeded in taking the castle and the county by force and destroying the fortress. A year later, however, in the peace treaty of Passau, the fortress Duke Friedrich III. awarded by Austria. This then rebuilt the central castle.

In 1389, however, the fortress was burned down by angry Passau guarantors. The cause of this unrest is unknown. In the following period the county was pledged several times to different people by the Habsburgs. This did not change until 1463. Johann von Rohrbach , Chamberlain of Emperor Friedrich III. , bought the castles Neuburg, Weißenstein , Frauenhaus and Neufels for 36,000 thalers . Thereupon he was appointed by the emperor as the new imperial count of Neuburg. Furthermore, he concluded a contract of inheritance with Friedrich III., In which it was determined that the county would fall back if his gender in the male line would expire. Daughters entitled to inheritance must be paid out by the emperor with 2,000 guilders . However, Hans von Rohrbach had no idea that this regulation would come into force very soon. Shortly after acquiring the county, he soon began expanding the fort. However, Johann von Rohrbach died in 1467, leaving behind his widow Scholastika von Weißpirach and his two married daughters. The county remained temporarily unnoticed by the emperor in the possession of his widow, who, however, stopped work on the central castle.

In 1469 the emperor finally occupied the fortress and the county as a fallen fiefdom . Johann's widow and one of his two daughters, Maria, were arrested. However, the latter happened to the emperor's misfortune, since Maria was married to the neighboring imperial count Sebastian the fighter of Ortenburg . When the latter found out that his wife had been captured, he hurried to Neuburg at night. He bribed the imperial guards and freed his wife and mother-in-law. He then drove out the imperial forces and claimed the county as his inheritance. Emperor Friedrich III. couldn't accept this. He moved with his troops to Neuburg and besieged the fortress for a few days. Sebastian and his Ortenburg men bravely defended the fortress, so that Friedrich had to leave without having achieved anything. Sebastian remained in the possession of the imperial county until 1473. This year, Duke Ludwig IX mediated . of Bayern-Landshut between the parties to the dispute. Sebastian then had to return the county to the emperor and received the compensation of 2,000 guilders set out in the inheritance contract of 1463. The Ortenburg count then had to leave.

Emperor Friedrich III. was in financial difficulties, so he had to pledge the county to Duke George the Rich of Bavaria-Landshut . However , he retained the high jurisdiction , so that Neuburg am Inn remained under his state sovereignty. In 1497 Duke Georg acquired the entire county for 36,000 guilders, but with the option of redemption.

However, the county did not remain in Bavarian ownership for long. In December 1503 Duke Georg von Bayern-Landshut died, whereupon the Landshut War of Succession broke out. For the mediation and restoration of peace through the Köllner Spruch in July 1505, however, the Roman-German King Maximilian I demanded large compensation, including the county of Neuburg again to Austria. The handover to Maximilian I took place in 1507.

Despite its small size, the county continued to be an important bone of contention between Bavaria and Austria. Neuburg lay like a bolt in front of the Passau monastery and controlled all access to the city, even the main road connections to the city ran through the Neuburg Forest . In the 150 years that followed, disputes between the two states over the membership of the county continued to arise.

However, Neuburg did not remain in the possession of the Habsburgs for long, as early as 1514 the county was mortgaged again. On August 9th, Count Johann von Canissa received the county for 40,000 guilders. In October he negotiated for extended rights to keep the county for life and beyond, as well as to carry the coat of arms and the title of Count von Neuburg . Due to the increasing financial hardship, Johann von Canissa advanced further funds to the emperor so that he could meet his demands and others in 1518. 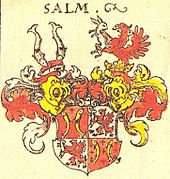 Due to his services in successfully defending against the first Turkish siege of Vienna , the imperial general Niklas Graf von Salm (from the Luxembourg line of this family) received the county as a fief in 1529 and thus became the ruling Count Nikolaus I of Salm-Neuburg . However, he died a year later. He was succeeded by his son Nicholas II (1503–1550). He had the Neuburg redesigned into a renaissance castle. In 1563, his son Nicholas III. , Nephew of Passau bishop Wolfgang von Salm , started the Reformation in Neuburg. In contrast to the nearby imperial county of Ortenburg , Neuburg could not maintain the Lutheran faith, as it was a Habsburg fief. After the increased re-Catholicization in Austria from 1620, the Reformation was also reversed in Neuburg. The county remained in the possession of the Counts of Salm-Neuburg until 1654.

After the death of his brother Julius II, Imperial Count Karl I († 1662) sold the county for 400,000 guilders to Count Georg Ludwig von Sinzendorf . However, this trade was only confirmed by the emperor in 1662. After receiving the county, Georg Ludwig was keen to settle his own dispute with Bavaria over the county, which he quickly succeeded in doing. At the same time he had the fortress Neuburg converted into a baroque palace . Furthermore, he had the goal of developing the county into an important mercantile center. He planned the introduction of coinage, the establishment of a gold and silver wire factory, a lime and brick kiln, and promotion of the economy through tobacco cultivation, saltpetre extraction and the establishment of a brewery. His construction activity led to a slight economic rise in the imperial county. For himself this was a big losing business. In 1680, however, Count von Sinzendorf was charged with high treason , lese majesty and other offenses. He was also convicted of fraud, 1,000,000 guilders alone were missing from the coffers of the County of Neuburg. Thereupon he was removed from all offices and the county was drafted from the imperial court chamber in Vienna .

In 1698 the county was mortgaged again, this time to the Scottish Count Jakob von Hamilton from the House of Hamilton , imperial chamberlain and governor of the margraviate of Burgau . He received the county for 300,000 guilders initially for 10 years, in 1701 he received it in full, but with the right of first refusal. During his reign, Neuburg suffered heavily in the War of the Spanish Succession , as it was between the two parties to the dispute, Austria and Bavaria. Count Jakob died in 1716, followed by his son Count Julius Franz Xaver Leopold von Hamilton . However, it was not owned by the county for long, as early as 1719 it was bought by Count Carl Josef von Lamberg- Prince Stone for 440,000 guilders. Eleven years later, Neuburg changed ownership again, this time to the Passau monastery : the owner's brother, Passau Prince-Bishop Joseph Dominikus von Lamberg , acquired the county for 515,000 guilders and 1,000 ducats .

In 1803 the county, although it was an Austrian fief, was added to the Electorate of Bavaria as a result of the Reichsdeputationshauptschluss . The reason for this was the secularization of the Passau bishopric . The Bavarian duchy was awarded large parts of the bishopric property, including the county of Neuburg am Inn, and incorporated them into its national territory. The Reichsgrafschaft Neuburg am Inn ceased to exist.

Today the area of ​​the former imperial county is divided between Austria and Bavaria. The areas to the west of the Inn belong to Bavaria , the eastern ones with Wernstein Castle to Austria .