The ducat or ducat (in Latin ducatus " duchy "; also known as zechine or zecchine ) is a gold coin that was widespread throughout Europe until the beginning of the 20th century. It has a fineness of 986/1000 and weighs about 3.49 g (fine weight about 3.44 g). The frequently used term gold ducat is therefore a pleonasm .

Ducats were first minted in Venice in 1284 . The obverse of the Venetian ducats shows Saint Mark presenting the cross flag to the doge . The reverse shows the image of Jesus in a mandorla .

The name Dukat comes from the inscription on the back of the first coinage: Sit tibi Christe datus quem tu regis iste ducatus ("To you, Christ, this duchy, which you rule, be given"). The Venetian ducat is also called zechine or zecchine ( Italian zecchino ). The name is derived from the Italian zecca ("mint", "mint"), from arab. sikka (" embossing stick ").

In Venice, until the end of the Republic in 1797, ducats were minted with the same coin design and almost unchanged fine weight (gold content). This made the Venetian ducats the most stable currency in the world for centuries.

From Venice, ducats spread across the entire European continent and into the Orient. For the 14th and 15th centuries in particular, the ducat is likely to be seen as a world trade coin that was also used as a benchmark for weight comparisons.

In contrast to the similar gold guilder , the ducats had a largely stable fineness, which explains their general popularity. Multiple and partial denominations were also minted from the ducat for gifts or special occasions, e.g. B. Lamb ducats from Nuremberg 1632–1806 in the shape of a cliff . 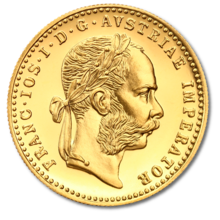 Face of the new issue of 1 ducat gold coin. 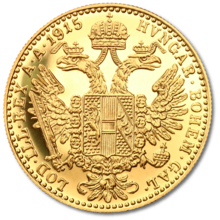 Value side of the new issue 1 ducat gold coin.

In Germany, the ducat was declared an imperial coin in 1559 and thus the main gold coin that replaced the gold gulden in most places. In 1857 it was abolished in the territory of the German Customs Union .

The ducats (and August d'or) minted in Saxony from around 1587 to 1838 of the Dresden mint and, for a time, Leipzig were silver currency , but clearly also had a function of payment. Their value was traded on price lists of the stock exchanges around 1780 between 66  Gr 8  Pf and 68 Gr 3 Pf in Saxon "Courant", i. H. approx. 2¾ Reichstaler.

In what is now Switzerland , ducats were minted around 1500 by the bishop of Lausanne , around 1520 by Uri , Schwyz and Nidwalden in their subject area Bellinzona and a little later also in Freiburg . In the 16th century it was primarily the economically important centers of Basel and Zurich that emitted ducats.

With the ratification of the Vienna Mint Treaty in 1857, the existing gold currency in Austria was replaced by a silver currency. The Austrian ducats continued to be minted as trade coins for international trade. In addition, Austria had the option of having ducats minted for domestic payment transactions. A state obligation to accept ducats existed based on a spot rate fixed for a maximum of 6 months, which was determined according to the market value ratio between gold and silver. With the variable setting of the spot rate, arbitrage profits were avoided by exchanging gold and silver coins. Austria withdrew from the Vienna Mint Treaty at the end of 1867 (following the Peace of Prague of 1866).

In the 19th century, the German ducat minting declined sharply and assumed more and more medal character, see z. B. the Bavarian Isar, Danube, Rheingold or Goldkronacher yield ducats. The last ducats of the 19th century were popular as baptism and godparent gifts. In Switzerland, in the first half of the 19th century, ducats were still minted in the cantons of Zurich (1810), Bern (1825) and Schwyz (1844).

To this day, ducats (like the silver Maria Theresa thalers ) are minted in Austria for gift and collector purposes. It is the official re-minting of the ducats from 1872–1914 with the laureate head image of Emperor Franz Joseph I. The re- mintings almost consistently show the year 1915. The rare year 1951 was a mistake by the die cutter.

The Austrian four-ducat piece with four times its weight and gold content will also be minted. This coin with a laurel bust of Franz Joseph I has a diameter of 39.5 mm and is therefore made of thin sheet gold. 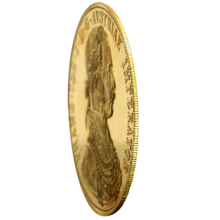 The coins are large for their weight, but very flat. Here you can see the marginal side of the 4-fold Austrian gold ducat.

In the Netherlands the ducat is minted to this day, both as an investment coin and for coin collectors . The current design dates from the time of the Seven Provinces , but differs slightly from it. That is why, and because it shows the current year, this is not just about copying, but about the continuation of tradition.