The core castle (also called main castle , stronghold or inner castle ) describes the part of larger castles that is particularly strongly secured by a fore castle , kennel , trenches , a ring wall and other outer works and thus represents the core of a medieval fortification .

It includes the most important manorial residential and defense structures such. As the hall building , the palace , the residential tower and the dungeon . The castle well or the cistern is usually also located in this area , as water supplies were particularly important in the past in order to be able to offer sufficient resistance to the enemy during a siege .

The core castle is usually the oldest part of a castle complex, as it houses the buildings that were first erected during the construction of a castle. It often has flanking towers that were built to coat the sides of the curtain wall and to provide additional protection for the castle gate .

In complex castle complexes, the buildings of the main castle are often grouped in a ring around a castle courtyard, which served as a central storage area and - if it was large enough - also as a tournament area. 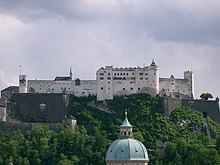 The early modern fortress Hohensalzburg, in the middle the old inner castle

The name stronghold results from the fact that the core castle in hilltop castles and in the case of moated castles was usually higher than the outer castle . The Romanesque core of the Hohensalzburg Fortress is still called the Hoher Stock today .