The Reich Chamber of Fine Arts ( Reichskunstkammer for short ) was an institution in the “ Third Reich ” that had the task of promoting fine arts that corresponded to the attitudes of the time, but also to suppress directions that contradicted it. A “ German art ” in the sense of National Socialism was contrasted with a “ degenerate art ”. The Reichskunstkammer thus contributed to bringing culture and society into line during the National Socialist era . Only members could exhibit in the German Reich and practice art as a profession. Artists with a Jewish or Communist background were not allowed or were excluded. If they could not leave Germany in time, they were murdered or executed in the Holocaust ( Oda Schottmüller , Cato Bontjes van Beek ). 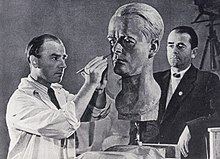 The Reichskunstkammer or Reichskammer der bildenden Künste was founded on November 1st, 1933 as one of seven departments of the Reichskulturkammer by the Propaganda Ministry . Their determination, as veiledly defined by Propaganda Minister Goebbels , should consist in this

“ To promote German culture in responsibility for the people and the Reich, to regulate the economic and social affairs of the cultural professions and to find a balance between all efforts of the groups belonging to it through the cooperation of the members of all branches of activity covered by it under the leadership of the Reich Minister for Public Enlightenment and Propaganda to effect. "

In fact, it functioned not only as a non-profit professional organization, but also as an organ of control and the so-called conformity of artists by the Nazi regime. In 2015, the art historian Nina Kubowitsch came to the following conclusion on the basis of their investigations into the activities of the Reich Chamber of Fine Arts: "The mass of tens of thousands of artists in Germany was very heterogeneous, there were not only persecuted and degenerate artists on the one hand and the 'Nazi artists 'on the other hand. The real mass of artists and cultural workers in Germany lay between these two poles. Their fates must also be taken into account when examining the Reich Chamber of Fine Arts, because they formed the actual membership base. " The chamber should not be determined unilaterally on its function as a mere control body or as a mere representation of artists' interests.

In order to be admitted to exhibitions, membership in the Reichskunstkammer was essential. Some artists were rejected or excluded "if there were facts that the person in question did not have the reliability and aptitude required to carry out their work."

The Reich Chamber of Fine Arts was divided into the following professional associations:

The Reich Chamber of Fine Arts was located in what was then Berlin W 35, Blumeshof 4–6 (today the Tiergarten district ). It was divided into 31 regional sections across the empire, which were led by so-called state leaderships and their "state leaders". Country leaders were u. a.

The organization saw itself, like all other imperial chambers, as a professional representation of all artists belonging to it. All full-time employees were included, insofar as they could be assigned to the professional associations of the professional groups. Membership in the Reich Chamber of Culture was binding for all German artists. This institution was a state authority that acted in the spirit of the Nazi dictatorship.

All previous professional organizations (including all free artist groups and associations) were dissolved or forcibly transferred to the Reich Chamber of Culture . People without Aryan evidence were gradually excluded. In addition, artists whose works represented system-critical content and / or " degenerate art " were excluded and were banned from painting and exhibiting. The relevant findings were made by relevant jury committees . As a rule, this was decided after field observations by party art commissioners in exhibitions, in the art trade or through private advertisements. Anonymous denunciations were the order of the day and were feared by all artists whose works did not meet popular taste. New admissions to the Reich Chamber of Culture were only made upon request. In 1936/37 the organizational harmonization of art under National Socialism in the sense of a "national socialist-influenced popular culture" was largely completed. Only those who were registered as members of the Reich Chamber of Fine Arts received government funding, public contracts and exhibition opportunities in the German art trade. Ultimately, the systematic deprivation of economic foundations meant a professional ban for all unorganized artists.

In the biographies of almost all full-time artists active at the time, the obligatory membership in the Reich Chamber of Culture (and its sub-groups) is concealed. In fact, the mere membership does not justify the suspicion that the artist was an active supporter and advocate of National Socialist ideas.

With the outlawing of all "people-destroying" art movements and all artists who were in any way connected to Judaism, the professional artists as members of the Reichskunstkammer were faced with a stylistic review of the content, and possibly readjustment or readjustment of their artistic work. Everyone had to find their own answer. So some went into inner emigration and tried to create harmless subjects such as portraits, still lifes, landscape painting or apolitical naturalism. A few artists continued to stand by their art and their own artistic expression. If their art was reported as degenerate , they fled into exile . Others renounced German art and the organized art business and took on another profession. The German artists of Jewish origin were persecuted, had to flee or were murdered in the Holocaust.

Individual chambers of the Reich Chamber of Culture