This article is about accusing or reporting a person. For information on denunciation in the sense of revocation of a contract, see contract under public law . 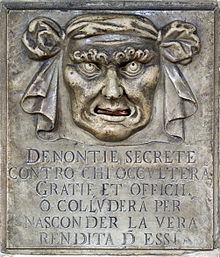 A “snapdragon” ( Bocca di Leone ) at the Doge's Palace in Venice. In the Republic of Venice , informers could throw their secret reports into such "snapdragons". The Italian text translates as: "Secret denunciations against those who hide favors and duties or who agree in secret to hide their real gain".

A denunciation ( lat. Denuntio, "to report the complaint") is understood to be the (criminal) complaint made by an informant for personal, low motives, such as the achievement of a personal advantage. The denouncer thus reports to an institution higher than the denounced person. Denunciation can be anonymous , especially if the denouncer has an interest in ensuring that the person, institution or group he is denouncing should not find out who is behind the report.

The word "denounce" has another meaning, which comes from the English (to denounce), namely "pose as negative, brand, publicly condemn". The public denunciation does not represent a denunciation in the literal sense. Part of the denunciation is always the report to a superordinate institution for personal, low motives.

The word "denunciation" or "denunciator" can e.g. B. be used in political disputes to defame critics .

The term denunciation has a negative connotation. In contrast to denunciation, reporting is socially accepted in the case of serious crimes such as murder or rape and non-politically motivated crimes such as theft even in unjust regimes . Therefore, authors point out that in the context of dictatorships such as the GDR or the Third Reich, a distinction must be made between denunciation and legitimate complaint. Likewise, a denunciator is someone who, in order to avert danger to the general public or a part of the same, draws attention to an abuses at offices and authorities. The term “ whistleblower ” has recently been used here.

The reporting requirement can be legitimate, but is abused in dictatorships by being diffusely expanded. Booß and Müller-Enbergs have pointed out that information about related parties to the state is generally in a tense relationship. On the one hand there is a rather private morality that outlaws indiscretions towards neighbors, relatives and friends, on the other hand there are expectations of the state, especially in ideological dictatorships. In this area of ​​tension there is a broad field of behavior, ranging from legitimate reports to classic denunciation.

Denunciation can be specifically promoted as a means of obtaining information from the state and can serve as diverse purposes as denazification in the eastern and western zones of occupied Germany or "people's control" when building a new society in the GDR. Denunciation can, depending on the point of view, be assessed as a “crime against humanity” and a criminal offense, but it can also be recognized as a sign of “anti-fascist vigilance” ( Erich Mielke 1948).

In an ethical sense, denunciation is generally used when people are aggressively accused by state law enforcement authorities in a system that is not free from freedom, although it must be clear to the complainant that he is exposing them to the risk of politically motivated persecution ( see also: Heimtückegesetz ).

Gossip and denunciation are closely interwoven communication processes that often serve to marginalize individuals. Denunciation is characterized by the fact that it is sent to a higher authority (superior, party, government agency) from which - usually unspoken - sanctions against those affected are expected. In this respect, it is a means of social control that the “higher authority” likes to try to instrumentalize. Not infrequently, envy and feelings of revenge emerge as motives for denunciation, which is then disguised as a socio-political or even state-preserving concern. For example, sexual denunciation has always played a significant role not only in everyday life but also in political disputes.

Under National Socialism , the law on the punishment of false suspicions was tightened, but at the same time an abundance of denunciation possibilities was offered - without, however, stating an obligation to denounce.

Justice and Nazi Crimes is a multi-volume published collection of judgments by German courts on crimes of National Socialism with homicides, mainly committed in the course of the Holocaust. About seven percent of the more than 600 judgments in the first 22 volumes (judgments from 1945 to 1966) deal with crimes that occurred after denunciation. The collection has been fully available online since the end of 2008.

Section 225 of the Criminal Code of the German Democratic Republic prevented the failure to report certain crimes classified as serious, for example the unlawful crossing of the border (Section 213 of the GDR StGB) or "forwarding of non-secret messages to the detriment of the GDR" (Section 99 of the GDR- StGB), under penalty. The notification authority was the Ministry for State Security (MfS).

Most of the unofficial employees of the MfS, but also other informants such as the informants (AKP), did not approach the secret police of their own accord, but were approached by the MfS. This distinguishes them from the “classic” informers. Overall, however, such information was so indiscreet that it had to be investigated as part of the denunciation complex. For some of this information, the informant had to be aware that he could harm whoever he was talking about. When such information is given voluntarily, the room of denunciation is narrowed down.

In the Federal Republic of Germany , the duty to report (in Section 138 of the German Penal Code ) is limited to planned serious crimes and thus only serves to prevent them. In certain cases, failure to report planned crimes is itself classified as an offense.

In the west of post-war Germany - apart from the demands of the military government for active assistance in denazification - denunciation was negotiated on a more informal level as a means of resolving conflicts and as a means of determining one's position in the new democratic order. "The comparison of the different types of society also gives us an insight into how the individual's awareness of rights and injustice can change due to the intervention of the state and the judiciary and how they can guide behavior."

The saying “The biggest rascal in the whole country, that is and remains the informer” is well known. The authorship is often attributed to Hoffmann von Fallersleben since this verse was included in the collections of quotations from Daniel Sanders (1906) and Richard Zoozmann (1911). The source citation “Polit. Poems: Proverbs 17 ”is incomprehensible, however, and the quotation cannot otherwise be found in Hoffmann's work.

It is obvious, however, to see a paraphrasing of the song Der Denunziant by Max Kegel condensed into one sentence , which appeared anonymously in the satirical magazine Der Wahre Jacob in 1884 - during the time of the Socialist Law - and contains the following verses:

A whole country is polluted
Where is the informer sneaking around?
[...]
The eyesore of mankind is called
The vile informer.