Bad Abbach from the west

Location of the Bad Abbach market

Bad Abbach (until 1934 Abbach ) is a market and health resort in the Lower Bavarian district of Kelheim and is located in the Danube Valley between Kelheim and Regensburg .

In the extreme northwest of the market is the district Oberndorf with the lock Bad Abbach . The associated barrage with the Bad Abbach power station is located upstream in the Poikam district , where a road bridge at the weir crosses the river. In Poikam there is also a Danube bridge on the Regensburg – Ingolstadt railway line . In Bad Abbach itself there is only the widely visible footbridge to the so-called "leisure island" between the Danube and the lock canal, via which the swimming pool and other sports facilities can be reached.

The place belongs to the district of Lower Bavaria directly on the border with the Upper Palatinate .

Shortly after the exit from the spa town of Bad Abbach to Poikam, on the B 16, there is a striking rock monument from the nineteenth century, reminiscent of the rock blast at the time.

In the early Middle Ages the area belonged to the dominion of the Duchy of Bavaria . According to both the Hungarian Chronicle by Simon Kezai ("circa castrum abah") and the Bavarian Chronicle by Aventinus ("Lengfeld bei Abbach"), a German army was defeated by the Hungarians near Abbach. The statement by Aventinus that shortly afterwards King Ludwig IV ("the child", + 24th Sept. 911) died, allows a chronological classification in the year 911. This is probably the first mention of Bad Abbach. After Aventine was Henry the Wrangler on May 6, 973 a son, the future Emperor Henry II. , Born at the castle Abbach (for otherwise the theory is his birthplace Hildesheim). King Heinrich II. Donated Abbach in 1007 to the bishopric of Bamberg , which he founded and which in 1109 bequeathed it to the convent of Testinging , founded by Bamberg's bishop Otto I. The Prüfingen abbot had the castle destroyed because he expected resistance from the Bavarian subjects, whereupon the emperor reinstated the Bavarian Duke Ludwig I, the Kelheimer ; he rebuilt the castle and in 1210 granted market rights to the settlement below the castle . Ludwig made Abbach the seat of a nursing court that existed until 1803. Thanks to the ducal customs post in front of the imperial city of Regensburg, the place experienced an economic boom.

The sulfur springs were first mentioned in a document in 1262. According to coin finds, they may have been known to the Romans. It and the moor in Bad Abbach have been used against rheumatic diseases since the 15th century . A regular bathing operation can be proven from 1465. In 1532, Emperor Charles V underwent a spa treatment there.

On May 22, 1754, Electress Maria Anna , accompanied by her husband, Elector Max Joseph and with a large entourage, arrived in Bad Abbach for a spa stay. The cure at that time consisted of a combined drinking and bathing cure with a strict diet. There were concerts, theatrical performances, balls and extensive trips. On June 24th, Maria Anna ended her stay at the spa, which however did not result in the hoped-for birth of an heir to the throne.

The Abbach market had a market court with its own magistrate rights. Until 1803 it was the seat of a nursing office and belonged to the Straubing Rent Office of the Electorate of Bavaria . In the Kingdom of Bavaria, Abbach belonged to the Regenkreis from 1806 to 1837 , the forerunner of the Upper Palatinate administrative district , and since then back to Lower Bavaria.

The place was destroyed several times. In the Thirty Years' War the Swedes devastated the castle and market, in 1809 Abbach was affected by Napoleon's Fifth Coalition War , and half of the building was destroyed in a town fire in 1891.

Since March 1934, the name of the state-recognized spa has been "Bad Abbach".

More than half of the village was destroyed by artillery fire in 1945. The Bavarian Red Cross took over the old bathhouse in 1949 and the entire spa facilities in 1954. In 1956 the first new rheumatism hospital was opened, followed by two more in the new spa district. In the long run, however, these systems could not be operated economically.

The entire clinic of the Rheumatism Center Bad Abbach was restructured in 2011. After Asklepios acquired the aging BRK facilities in 2004, a new rheumatological clinic, an orthopedic clinic and a rehabilitation clinic were created. The older systems are canceled. The spa park was redesigned in 2010/2011 thanks to 1.278 million euros in aid from the economic stimulus package II .

The market council has (excluding the mayor) 24 members. The local elections on March 15, 2020 had the following result with a turnout of 63%:

In the last mayoral election on March 15, 2020, Benedikt Grünewald prevailed against two competitors with 53.29%. He succeeded Ludwig Wachs (Free Voters) who was elected on March 16, 2014.

France : The intensely cultivated twinning with Charbonnières-les-Bains has existed since 1978 . For the tenth anniversary of the partnership in 1988, a newly built, striking pedestrian and cyclist bridge over the Danube was named after the partner town in Bad Abbach.

Market square with St. Christophorus and St. Nicholas in the background

View of the market and St. Christophorus

The town center, which is laid out around the pedestrian zone Am Markt , is overlooked by two hills: the Schloßberg ( 383  m above sea level ) with the parish church of St. Nikolaus and the Abbach castle ruins ("Heinrichsturm") and, south of it, one second hill with the thermal bath Kaiser-Therme ( 379  m above sea level ). The spa park extends to the southwest of the market, several new development areas as well as kindergartens and schools in the north and east.

The spa park dates from 1872. During the restoration in 2010/2011, the existing park landscape was expanded and modernized with new water features with a rock grotto, a new roundabout in front of the spa center, large green areas with sun loungers , a Hildegard von Bingen herb garden and a small animal enclosure that can be visited during regular opening times. This is located in the rear part of the spa park.

The so-called Kaiser Therme offers a thermal bath with indoor and outdoor pools, a sauna area , spa treatments (massages, mud bath , tub baths) and aqua fitness . This was built in 1993 on the hill south of the market over which the Jurasteig runs. The emperor, meaning Charles V , was admittedly not yet able to cure this complex; but he stayed in Abbach for a cure in 1532 . A 45-minute stay in the salt cave , the salt from the Dead Sea contains is, for example, in diseases of the upper respiratory tract , cardiovascular diseases , skin inflammation and disorders of the autonomic nervous system indicated .

In addition to the health spa, which is linked to the clinics, the place also lives from private tourism. There are some hotels, guest houses, holiday apartments, private accommodation and inns.

Bad Abbach station, about four kilometers southwest of the main town near Lengfeld, is on the Regensburg – Ingolstadt railway line between Regensburg and Ingolstadt . Bad Abbach can also be reached via the A 93 Regensburg- Holledau (exit Bad Abbach) and the B 16 Regensburg-Ingolstadt. Furthermore, the triangle Saalhaupt, which connects the motorway-like B 15n to the A 93, and the first four kilometers of the expressway are in the area of ​​the market town. 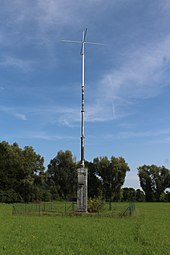 There is a DGPS transmitter in Bad Abbach , which is operated by the Federal Waterways and Shipping Administration .

Sons and daughters of the market town

Communities in the Kelheim district