Train is a municipality in the Lower Bavarian district of Kelheim . It belongs to the Siegenburg administrative community .

Train is located in the Hallertau and is part of the Regensburg planning region . 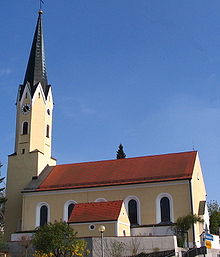 The place originated at the turn of the millennium as "Hittinburg" and was renamed Train in the 13th century. Several important noble families are among the owners of the Hofmarkschloss , including the Pfeffenhausener and Feurer, the Eckher von Kapfing and the Freiherr von Deuring, who established the castle benification in 1722. Perhaps the most famous guest that the castle walls once hosted was Emanuel Schikaneder . He is said to have written parts of his text book for Mozart's opera " The Magic Flute " here. The era of Elisabeth von Train, who was the owner of the castle from 1788 to 1807, was particularly eventful. During her reign there were even two sensational popular uprisings. In the course of the administrative reforms in the Kingdom of Bavaria , today's political municipality was created with the municipal edict of 1818 .

Train has also been the seat of a Catholic parish since 1980.

In 1945 or 1946 part of the dissolved municipality of Staudach was incorporated.

Gerhard Zeitler (independent list) has been mayor of Train since May 2002.

The description of the coat of arms reads: In tin cut diagonally divided by silver and blue; below is a silver label with a continuous blue St. Andrew's cross.

The coat of arms contains elements from the heraldic badges of two noble families who were important as owners of the castle and the Hofmark Train for the history of the community since the 16th century. The rafter is taken from the Pfeffenhauser coat of arms, which died out at the beginning of the 17th century. The three number of diamonds comes from the coat of arms of the Ecker von Kapfing.

Town view from the south

The moated train castle was built in the 15th century by the lords of the court. It is thanks to the Eckern that the castle, which was destroyed in the Thirty Years' War, was rebuilt. The castle has a beautiful pilgrimage chapel, the rococo altar of which was created by the Landshut master Christian Jorhan (the elder) . The Black Madonna, venerated as miraculous - a replica of the Altötting statue of grace carved in 1683 - attracted many believers around 1700. Pilgrimages came from parishes, some of them far away, almost every day.

The parish church of St. Michael, which was expanded and restored in 1995/96, is worth seeing. The lower tower walls with the chancel and stucco ceiling date from 1674, while the nave was rebuilt after its collapse in 1835. It was not until 1980 that the former Benefician Train, which had emerged from the former Castle Chapel Foundation, was elevated to its own parish.

There used to be another church on Vitalisberg. It was consecrated to St. Vitalis, but had to be canceled at the beginning of the 19th century "on the orders of the elector ". There are beautiful branch churches in the villages of Mallmersdorf and Neukirchen. The small church of St. Georg in Neukirchen is Romanesque and served the population as a fortified church during wartime. The old salt road once passed here. There is a newly built chapel near St. Johann, which reminds us that the place was only built in 1806 after a forest chapel that was damaged by fire was converted into a first residential building. The extensive Dürnbuch forest , which connects to the northwest of the municipality, offers relaxation and tranquility . The lonely forest chapel "Mariahilf" is worth a visit, where around 1745 a shopkeeper was attacked by robbers and saved by invoking Our Lady.

Train is connected to the A93 Munich-Regensburg motorway via the motorway entrance in the neighboring village of Elsendorf . The federal highway B301 leads through the district of St. Johann to Mainburg or Abensberg .

The largest local company is Hopfenveredelung St. Johann with a good 100 employees. It is the largest hop pelleting plant in the world. Most of the hop pellets of European origin processed in the world are produced there from hops from all over Europe. The plant is part of the international hop trading group Johann Barth & Sohn .

Communities in the Kelheim district