Schlosskapelle is a redirect to this article. For further meanings see Castle Chapel (disambiguation) .

A castle chapel is a sacred building that lies on top of a castle or belongs to it. The same applies to the palace chapel and palace .

The shaping of medieval society by Christianity also required castle residents to attend Holy Mass usually daily, but at least on Sundays and public holidays . Contrary to what the cliché might suggest, not every castle had its own chapel . The typical ministerial castles , for example, Turmhügelburg and residential tower , often did not have their own sacred space, as they were mostly located in or next to a village and thus near the local parish church. They also had little space. Larger castle complexes such as the royal palaces or bishop's palaces usually had their own churches or chapels to enable the passing gentleman and his court to visit the mass. The remote hilltop castles of the High and Late Middle Ages also mostly had a castle chapel.

Most of the burial places of the higher nobility were, however, in the own churches or monasteries they founded, and only rarely in the narrow castle chapels. However, memorial masses could be read there. Some even housed relics , elaborately designed ones also served representative purposes and were used for weddings, for example.

Religious care was taken over either by a specially employed deacon or priest , otherwise the local priest or a priest from a monastery came to the castle for mass. Since mostly only the clergy could read and write in the Middle Ages, the lords of the castle also used them as scribes . If they lived in the castle, they often had their own heated room. Since the knights of the order also held prayers of the hour in addition to mass , order castles always had their own churches.

Castle chapels usually bore the patronage of a saint with a special connection to the knighthood , e.g. B. Saint George and Gereon . The Sankt-Markus -Burgkapelle zu Braubach gave the castle its current name - Marksburg . In Italy the naming of castles after their patronage is very common. 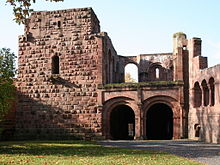 Above the gate , the Chapel of the Imperial Palace Gelnhausen

Several locations and structural variants were possible for the chapels. Many castles were probably content with an area integrated into another room. If necessary, an image or figure of a saint adorned him . In the smallest, there was just enough space for the lords of the castle. The chapel bay window was a little more sophisticated . Was he at the Palas cultivated hall, that was like a nave be used. In addition to structural evidence (e.g. Landsberg Castle in Alsace ), household inventories document such multiple uses. A document from 1463 reported that there was a chest with household textiles and liturgical implements in the Tomburg hall .

The chapel room was accessed from the residential building or hall. A chapel was an independent building . Both occurred in the most elaborate variant - the two-storey double or sometimes more storey chapels (example of a two-storey room: Bösig Castle , for a three-storey building: Büdingen Castle ). Another possibility offered the combination of chapel and gate construction , u. a. at Rheda Castle . This connection conjured up the divine protection for the most sensitive part of the fortress.

The expensive buildings were usually reserved for palatinate , sovereign and episcopal castles. It turned out to be particularly expensive in the New Castle in Ingolstadt . Most of the castle chapels were characterized by a rather simple, single-nave shape. In terms of form and integration, the High and Late Middle Ages showed no differences. During the Gothic period , additions to a residential wing such as the Ziesar castle chapel were made almost exclusively . At that time the double chapels in the narrower sense were missing. Only a few floors were built on top of each other, connected by a small opening in the false ceiling. So the service could at least be followed acoustically. The architectural era mentioned featured rib vaults , tracery windows and Gothic portals . Paintings that have been preserved are often the only original wall paintings . The movable equipment was often lost over time.

Several castle and palace chapels have their own Wikipedia article or chapter.