Linn has been part of Krefeld since it was incorporated in 1901 . Linn, with its historic town center, is nestled in the Lower Rhine lowlands approx. 5 kilometers east of the Krefeld city center and southwest of the Serm district of Duisburg . Together with Oppum and parts of Bockum it forms the municipality of Oppum-Linn.

The oldest reference to Linn can be found in the Kaiserswerth document, which was written between 1090 and 1120. At that time, the Kaiserswerther Chapter received income from Linn. In 1186 a Gerlach and in 1234 a Gerhard von Linn appear as witnesses. The castle in Linn was first mentioned in a document in 1299. At that time Linn belonged to the county of Kleve (1265-1392/94). The city of Linn was founded in the 1st half of the 14th century by Count Dietrich VIII von Kleve in the east of the outer bailey to Linn Castle. In 1388 the Archbishop of Cologne , Friedrich III. von Saar became the dominion in Linn, as Cologne fief in possession. Linn Castle became the seat of the Elector of Cologne, Tilgin von Bremt.

During the Electoral Cologne period, the castle and the city were hardly expanded, as the focus was placed on the fortification of the nearby city and customs station of Uerdingen, which also belonged to the archbishopric.

After the Hessian occupation, the citizens of Linner tried to restore their city rights. The then mayor Johann Streithoven testified on his deathbed in 1652 that he was still aware of the old document. He testifies to the Linner aldermen, Müntje, Spies, Kochs and Peter Reinerz, the type and extent of the city privileges. This process was documented by the then court clerk Theodor Gerlatzen. The original of this protocol is also no longer available. However, there is an excerpt from the court clerk and city secretary Moras and the notary Küpper (mid 18th century), which was presented to the electoral authorities on the occasion of a demonstration of the legitimacy of grazing and sweating in the Elt. This excerpt shows that the original of the minutes must have been available to Mr. Küpper and Mr. Moras.

From 1794 to 1813 Linn was part of the Arrondissement de Crévelt in the Département de la Roer under French rule. From 1816 Linn belonged to the Krefeld district as an independent mayor as part of the Prussian Rhine Province . Linn was no longer listed as a city in the Rhenish City Code of 1856.

In 1863 a synagogue was built on Rheinbabenstrasse in the style of oriental architecture (with a dome); the "silk baron" Philipp de Greiff and his daughter Marianne Rhodius paid for the building. The Krefeld-Linn train station was opened in 1874 .

The port of Linner today

The village of Linn was incorporated into the city of Krefeld in 1901. With its historic city center, it was about 5 kilometers east of Krefeld, without a direct corridor . It was not until the incorporation of Oppums in 1907 that Krefeld had direct access to Linn and the Rhine. The expansion of the Rhine port (1905–1906) then had a decisive influence on the further development of the district. In 1910/11 the port got a port railway. Therefore, various industrial companies settled in the following. The most outstanding settlements were:

In 1941 two bunkers were built in Linn ; they held 2500 people each: one on Memeler Platz and one on Rheinbabenstrasse (near Linn Castle). The latter is now a museum (see Burg Linn Museum Center ).

In Linn (about where the Autobahn exit of the A 57 Oppum / Linn is today) was one of the two large flak positions ( heavy flak ) around Krefeld, the battery 2./264 'Latumer Bruch' (the other was in Fichtenhain). There were also about a dozen smaller anti-aircraft guns around Krefeld.

Linn was largely spared from destruction in both world wars. Almost the entire historic city center is now a listed building . During the expansion of the port of Linner 1971–1978, the remains of an old Roman quay and three medieval ships were found under the alluvial sand. The boats were rescued in an emergency excavation . One of the boats comes from the Carolingian era and was initially stored in a preservation solution for several decades. Today the boat can be viewed in a specially built hall in the Lower Rhine Museum of the Burg Linn Museum Center. 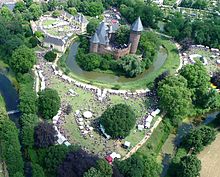 Districts of the city of Krefeld