Ziesar [ t͡siˈeːzaʁ ] is a town in the Brandenburg district of Potsdam-Mittelmark and the seat of the Ziesar office . Its landmark is Ziesar Castle .

Ziesar is located directly on the northern slope of the Fläming . To the north of Bücknitz, large areas belong to the Fiener Bruch , which is part of the Baruther glacial valley . In the southern area of ​​the glacial valley , a sandy alluvial cone was washed up by ice age meltwater , on which the Bücknitzer Heide , a pine forest , developed. Running waters in the area of ​​the city of Ziesar are the Buckau , which drains to the Havel, with its tributaries Geuenbach , Kirchenheider Bach , Strynzelbach , Strepenbach and Litzenbach . The Kobser Bach or the Buckauer Hauptgraben flows directly through the small town.

In addition to the core city, the following districts belong to Ziesar: 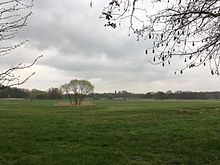 The name of the city is derived from Polabian . Za jezero means "behind the lake". This refers to an area south of the castle in which there used to be a 2 km long and 1.5 km wide lake that was fed by springs south of the city. The lake was drained through drainage and from 1880 it was used as a hay meadow and cattle pasture. Jezer appears in several place names in the area, such as Ferchesar and Hohenferchesar .

Ziesar in the bishopric of Brandenburg

As early as 1226, brothers of the Franciscan order founded in 1210 can be found in Ziesar. The Brandenburg prince-bishop Gernand supported the settlement. The Ziesar pastor Helias ( magister Helyas, plebanus de Secezere , died 1237), a learned priest according to his title “Magister” , founded the Ziesar monastery , which was soon moved to Brandenburg an der Havel because there had been civil unrest in Ziesar . The Holy Cross Church was built in the 13th century and a second monastery of the Cistercian women was built in the first half of the 14th century . The expansion of Ziesar Castle also took place at this time .

Ziesar was on the old Brandenburg – Magdeburg military road . Ziesar gained in importance after the Brandenburg bishop Ludwig expanded Ziesar Castle into his permanent residence. From 1327 to around 1560, Ziesar was the seat of the bishops of Brandenburg and the royal seat . The town charter was probably granted in 1373. Around 1400 the city was fortified, ramparts, moats and four city gates were built.

In 1555 the city fathers built a community hospital. The place suffered two destruction in the Thirty Years War . After the Reformation , Ziesar Castle was the seat of an electoral office from 1570 to 1820. Due to the inner-Prussian exchange of territory with Luckenwalde , the city had belonged to the Duchy of Magdeburg since 1773 and was in what was then Ziesar's district . Clay deposits were discovered near Ziesar in 1624. This raw material provided the basis for the development of a pottery industry, which was one of the city's most important industries well into the 20th century. The connection to the postal route from Berlin via Brandenburg and Ziesar to Kleve brought a further economic upswing . In 1673 the town hall burned down. Between 1860 and 1872 builders restored the Holy Cross Church. The city benefited from the connection to the highways, which was made between 1860 and 1873. In 1896/1897 the city fathers built the Westbahnhof and put a small railway into operation.

In 1993, a treasure trove of coins from the reign of Frederick the Great was recovered in Ziesar . In the same year a Ziesar office was established again, the administration of which is located on the castle grounds. The places Bücknitz, Glienecke and Köpernitz were incorporated on March 1, 2002.

The city council consists of 12 members and the honorary mayor.

Sehm was elected in the mayoral election on May 26, 2019 with 60.4 percent of the valid votes for a further term of five years.

Blazon : "In red, two crossed, golden keys, the beard of the standing one turned to the right, that of the one lying to the left turned upward."

The figures of Ziesar's coat of arms evidently go back to their former spiritual owner, Bishop Dietrich von Brandenburg.

This is the coat of arms of the Diocese of Brandenburg , to which the place was assigned when it was founded in the middle of the 10th century. The SIGILLUM CIVITATIS SIGEZER of the 14th century shows the key plate as shown here, sometimes the position changes; in the 18th century the keys were also crossed diagonally. Hupp, however, tings the coat of arms in red with two crossed silver keys.

The Protestant Church of St. Crucis was built from field stones at the beginning of the 13th century as a late Romanesque hall church and cruciform church. A low choir square with a semicircular apse adjoins the main nave, which was formerly provided with a wooden beam ceiling. Over the centuries there have been several modifications. St. Crucis belongs to the Evangelical Church District Elbe-Fläming of the Evangelical Church in Central Germany .

House of Frederick the Great

The building was built by order of King Frederick II, presumably in 1775 as a royal storehouse. The builder was presumably the only construction specialist in town at the time, master bricklayer Wilhelm Blanckenhorn. House Mühlentor 16 was intended to serve as quarters for Frederick II as well as other royal and princely lords who were passing through. Various stables and an official garden originally belonged to the building.

In the 1990s, the lowlands of the Fiener Bruch and adjacent plateaus such as the Fläming area were designated as an EU bird sanctuary of Fiener Bruch as part of the Natura 2000 network . The Fiener Bruch is one of only three breeding areas left for the Great Bustard , the heaviest bird capable of flying, which is threatened with extinction in Germany .

A checkerboard flower meadow , the only occurrence east of the Elbe, is designated as a natural monument .

The Buckau has been used to drive water mills since the Middle Ages . For this purpose barrages and water mills were installed in several places . The Buckau watermills were primarily used to grind grain. Their economic importance was gradually lost with the extensive shutdown of the mills. However, some systems are still functional and in occasional use. The owl mill, for example, is still used now and then and not commercially as a sawmill . Several Buckau watermills were converted into hydropower plants and have been used to generate electricity ever since. For example, the Eulenmühle and the Kruger Mill feed electricity into the public grid. The Kruger Mill is home to a museum.

Since 1897 a narrow-gauge railway of the small railways of the district Jerichow I connected Ziesar with the castle (near Magdeburg) . In 1901 a connection to Wusterwitz (branch from the Brandenburg – Magdeburg line) went into operation, which was extended to Görzke in 1912 . In 1916 the Güsen – Ziesar railroad finally went into operation (see also Kleinbahn-AG in Genthin ). In this context, Ziesar also received a new central station in the east of the city. The narrow-gauge railway was discontinued in 1960, the line to Wusterwitz in 1971. On the line to Görzke there had only been freight traffic since 1973, which was carried out until 1994. Until 1999 there was still passenger traffic to Güsen and goods traffic to a connection in Bücknitz , after which the routes were closed and largely dismantled. On the route to Görzke today there is a cycle path from the motorway junction at Ziesar to Görzke. The buildings of the narrow-gauge train station Ziesar West in the north of the city, the first train station on the line to Wusterwitz, in the north-east and the former central station in the east of the city have been preserved, the facilities of the central station are listed as a historical monument, as is the no longer used locomotive shed in the southern part of the Station area.

Ziesar has been connected to the Prussian road network since 1862. The federal road 107 between Genthin and Wiesenburg / Mark and the state road L 93 Ziesar – Brandenburg an der Havel run through the city.

In 1936, today's A 2 motorway was opened, which leads past the city about three kilometers south. The Buckautal service area is located near the Ziesar junction .

Districts, inhabited districts and residential areas of the city of Ziesar

Cities and municipalities in the district of Potsdam-Mittelmark