This article deals with the city of Möckern in Saxony-Anhalt, for other meanings see Möckern (disambiguation) . 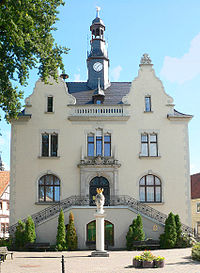 Town hall from 1895 with stele of the city goddess

Möckern is a unified municipality and city in the district of Jerichower Land in Saxony-Anhalt .

The city is located in West Fleming on the federal highway 246 and the Magdeburg – Loburg railway line . The state capital Magdeburg is a few kilometers to the west, the district town of Burg borders the municipality in the north. The federal motorway 2 can be reached after ten kilometers via the B 246a , which leads through the administrative headquarters in Möckern. The Elbe tributary, the Ehle , flows through the city , and an approximately 50 km² pine forest area extends to the east. The highest point is at 127  m above sea level. NHN of the Jerusalemberg on the Altengrabow military training area . Möckern is in fourth place in the list of the 100 largest municipalities in Germany after Berlin , Hamburg and Gardelegen and with a good 525 km² has about a fifth of the area of ​​the Saarland .

Möckern consists of 50 districts, which are divided into 27 localities. The districts were combined to form localities according to the earlier municipal structures. In addition, there are the settlements and desolations listed in the table below , which belong to the aforementioned district.

Five small enclaves , which belong to the Brandenburg municipalities of Buckautal and Ziesar in the Potsdam-Mittelmark district , are located in the urban area of ​​Möckern, and vice versa there is an exclave that belongs to Möckern, in Ziesar's urban area.

The Slavs called the place from which Möckern later developed "Mokrianici" - a damp place - because the Ehle formed an extensive marshland here at that time. It is believed that the settlement was under German influence as early as the end of the 9th century; it is certain that it was a German Burgward in the middle of the 10th century . As such, she was obliged to pay a tithe to the Magdeburg Moritzkloster with a certificate from King Otto I from 948 . This document is the first mention of the place. At that time, a castle was built, instead of the old Slavic plant, which keep part of the Möckeraner castle today. It served as an outpost to protect Magdeburg and at the same time secured the important roads to Brandenburg and Zerbst. In 955 Otto I is said to have founded the parish church after his victory over the Hungarians on August 10th of the year (St. Laurence's Day ), which has since been named after the saint. In the 11th century Möckern received a city fortification (since the 12th century made of field stones), which was equipped with three gates. There is evidence that Möckern already had town charter in 1373.

The succession of rule in Möckern was varied and complicated over several centuries. In the 12th century, the Brandenburg margraves exercised the rulership rights, but Margrave Otto II left them to the Archdiocese of Magdeburg in 1196. In the 14th century at the latest, Möckern came into the possession of the Quedlinburg Abbey , which the Counts of Arnstein enfeoffed with the city as a manor. In 1376 the monastery gave its rights back to Brandenburg. After that Möckern was pledged several times, u. a. to the von Alvensleben family or the Archdiocese of Magdeburg. After several trials, the Brandenburg elector renounced his feudal sovereignty in 1472 in favor of the archbishopric. The fief went to the Counts of Lindow-Ruppin , who owned it until they died out in 1524. In 1710 ownership passed to Christian Wilhelm von Münchhausen , and in 1742 to the barons of Hagen, whose patrimonial rights were revoked in 1849 and expropriated in 1945 through the land reform.

As a result of the occupation by Duke Franz Karl von Lauenburg during the Thirty Years' War in 1626 and a major fire in 1688, severe damage was done to the city. Since 1680 the city belonged to the Brandenburg-Prussian Duchy of Magdeburg and was in what was then Jerichower District . In 1700 a new town hall was built. In 1715, von Münchhausen had a new castle built to replace the old castle, which was rebuilt in 1840 at the instigation of his successor, Count Wilhelm vom Hagen.

On April 5, 1813, heavy fighting took place south of Möckern between the allied Prussian-Russian troops and the French army, which ended in a defeat for the French and marked the successful start of the war of liberation against Napoleon . The event went down in history as the battle near Möckern .

After Prussia's final victory , the kingdom reorganized its district administration. So Möckern came in 1816 to the newly formed Jerichow I district with the district town of Burg. Up until now the place had the character of an agricultural town with breweries and grocery stores, but the infrastructure changed noticeably with the Magdeburg – Loburg railway line opened in 1892 with the settlement of sawmills, a steam mill and a starch factory. Also in 1892, with the support of the fire society, a military fire brigade was set up. In 1895 the previous town hall was replaced by a three-storey new building in the Renaissance style . At the end of the 19th century Möckern had over 1700 inhabitants.

The relative prosperity of the city was also evident in the private building activity that began in the second half of the 19th century and lasted until the beginning of the First World War . During this time, a number of new streets were built in the western part, some of which were built with Art Nouveau houses. On May 5, 1945 Möckern was occupied by the Red Army. As a result, 42 residents committed suicide.

After the end of the Second World War , the Counts of Hagen were expropriated by the land reform ordered by the Soviet occupying forces and thereby also lost their Möckeran castle. A branch of the Magdeburg State Archives was housed here. With the GDR territorial reform of 1952, Möckern first came to the Loburg district and on June 20, 1957 to the Burg district. In the 1960s, the poultry fattening operation Kombinat Industrielle Mast (KIM) was set up, which developed into the largest of its kind in the GDR. In 1964, 2,904 people lived in Möckern.

After German reunification, the KIM was taken over by the Wiesenhof Group, which secured 400 jobs for the city. Another important employer is a company that makes laminate flooring that is sold across Europe. Jobs were also created by the old Graf vom Hagen family, who returned to their homeland in 1991 and were able to buy back their former estate. After the State Archives moved out in 1998, the Möckern elementary school was housed in the castle, which remained in municipal ownership. Möckern has been the seat of an administrative community since 1991, initially the seat of the Möckern administrative community , then from January 1, 2005 the Möckern-Fläming administrative association and since July 1, 2007 the Möckern-Loburg-Fläming administrative association , which was dissolved on September 1, 2010, but was re-established on August 31, 2011 by spinning off the town of Schopsdorf from the town of Möckern - this time with two communities. From 2005, in the district of Lochow on the grounds of a five-hectare former military a branch of the -Grundstücks forensic institute Uchtspringe furnished with 80 seats despite massive popular protests.

→ Main article : List of the incorporations in the city of Möckern

In the city there is a grave near the cemetery chapel in the local cemetery for the non-party carpenter Albert Werlitz, who was arrested at the beginning of the National Socialist era for expressions hostile to the regime and died in Gommern prison . A street name also reminds of him, while a plaque on the town hall portal has disappeared.

The city council last elected on May 26, 2019 comprises 29 city councils belonging to the following parties and groups:

The districts represent their interests through their local councils and each by its mayor.

Mayor Frank von Holly-Ponientzietz (non-attached) was elected on March 22, 2015 with 51.3 percent of the vote.

Coat of arms of the Möckern district

Coat of arms of the Loburg district

Blazon : “Square of gold and red; Field 1: a red castle with three tin towers, green, butted, pointed roofs and an open gate, inside a drawn portcullis, on each side a bay window with a green, butted, pointed roof; Field 2: a silver castle with a tinned black grooved wall, an open gate and three towers, blue pointed roofs on the gate tower and the three towers, a golden cross from the pointed roof of the lower, central tower; Field 3: three golden ears of corn placed like a fan; Field 4: three fan-shaped green oak leaves. "

In field 1 is the former coat of arms of the city of Möckern, in the second field the old Loburg coat of arms can be seen. The fields three and four stand for the forests and fields and especially for the Fläming.

The coat of arms was approved by the district on December 21, 2009. It was designed by the local heraldist Jörg Mantzsch .

Coat of arms of the Möckern district:

The symbolism goes back to a seal from 1473, which bears the inscription "sivitatis * burgesi * van * mockern" and thus probably refers to the former moated castle .

The blazon of the coat of arms established in GDR times read: "In gold, a five-tower red castle with a grooved wall and black gate opening, the towers - two small outer, two higher tinned inner and a tinned central tower - with blue pointed roofs and golden knobs." The appearance did not match the Möckern coat of arms depicted by the heraldist Otto Hupp at the beginning of the last century. The new design of the coat of arms was therefore based on the historically guaranteed graphics and adapted to a contemporary style of coat of arms art.

In May 1995 the heraldist Jörg Mantzsch carried out an order from the city administration to redesign the coat of arms, which is based on customary law, in order to bring it into the approval process.

The Protestant St. Laurentius Church is located in the southern city center. The original building from the 10th century was initially made of wood and was rebuilt with field stone from the 13th century; Next to the square tower, a much wider nave from the 15th century and a narrower chancel were built. Inside, the altarpiece made in 1587 deserves attention with its paintings.

St. Timothei is the ruin of a Romanesque stone church in the village of Klein Lübars. Other typical stone churches from the Romanesque period are located in the districts.

To the east of the market square in the city center is Möckern Castle . The oldest component is the square keep from the Middle Ages . The current castle building dates from 1840 and was built by the manor owner von Hagen. An English landscape park belongs to the castle .

On the market square in front of the town hall there is a man-high stele on which a crowned woman's head is enthroned, known as the “city goddess”. It was created in 1995 by the Magdeburg sculptor Heinrich Apel . In a city publication it is described as follows: “Its crown is a city wall with open gates for every woman and everyone, on whose battlements the hardworking citizens show their craft. A pair of lovers sits like a rogue in the neck - a representation of youth and the constant renewal of small-town life ”.

The Magdeburgerforth station in the district Magdeburgerforth is a listed Museum station of a historic narrow-gauge railway . An association is rebuilding a line of the small railways in the Jerichow I district that started at the station and was closed in the 1960s . An already completed section of the route will be used by the public.

The cultural monuments of Möckern are registered in the local register of monuments.

The following educational institutions exist in the city of Möckern:

Personalities who work, worked or died in Möckern

Unified municipalities in the district of Jerichower Land