The Veste Heldburg was a high medieval hill fort that was rebuilt as a palace in the Renaissance style in the 16th century . It rises on a 405 m high volcanic cone , which is part of the former Heldburger Gangschar volcanic area, 113 meters above the town of Heldburg in the Heldburger Land , the southernmost tip of the Hildburghausen district in Thuringia . Founded in the 12th or 13th century, due to its exposed location it has also been called the “Franconian lamp” since the 14th century, as a counterpart to the “Franconian Crown”, the Coburg Fortress that is within sight . The fortress Heldburg is the only Thuringian complex that is one of the sights on the Castle Road . In French, the construction of the fortress is Opened in September 2016 German castle museum . 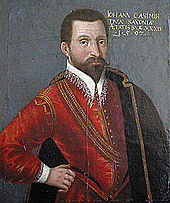 Courtyard of the fortress Heldburg 1872, on the left the French building with mansion and women’s bay

At the beginning of the 14th century, the hilltop castle was owned by the Counts of Henneberg-Schleusingen and served as the official and court seat after the regional center of power at Struphe Castle (today: Straufhain Castle ruins near Streufdorf ) was abandoned. In 1374 the Heldburg Fortress fell to the Wettins . From 1560, Johann Friedrich the Middle had it converted into a ducal residence by his court architect Nikolaus Gromann in the Renaissance style (new building) . Gromann's most important Renaissance buildings include the French building on the Veste Heldburg, the French Palace (today: Duchess Anna Amalia Library ) in Weimar and the Altenburg town hall.

Duke Johann Casimir von Sachsen-Coburg used the castle for decades as a secondary residence and hunting lodge . On the occasion of his wedding to Margarethe von Braunschweig-Lüneburg in September 1599, numerous guests of the duke stayed there; In addition to the bride, Margrave Georg Friedrich I of Brandenburg-Ansbach-Kulmbach , Duke Ernst II of Braunschweig-Lüneburg , Duke Wilhelm Kettler of Courland and Semgallia and Duke Johann Ernst of Saxony-Eisenach , each with their court.

After several conquests and looting during the Thirty Years' War , the Heldburg was re-fortified with fortifications on the Schlossberghang 1712–1720 (fortress construction not completed). The complex was the temporary residence of the Ernestine dukes of Saxony-Hildburghausen from 1682 to 1684 and was occupied by a permanent military garrison from 1717 to 1724. Only remnants of the fortifications are left on the hillside of the Schlossberg. In 1826 the Heldburg became the property of the Meiningen ducal house . Duke Georg II had it completely renovated from 1874 to 1898 and from May 1877 lived in it temporarily with his wife Helene Freifrau von Heldburg . The focus of the redesign in the style of historicism was on the interiors of the French building and the barracks in the commanders' building. With new tower domes, the Duke gave the fortress its characteristic silhouette in the spirit of castle romanticism.

From 1926 to 1945 the titular duke Georg III. and his wife Klara Maria (1895–1992), née Countess von Korff , the last owners of Veste Heldburg. As one of four children of this couple, Regina von Sachsen-Meiningen grew up on the Heldburg. Georg von Sachsen-Meiningen was a judge in Hildburghausen. He and his family were expropriated without compensation in 1945 ; he himself perished in Soviet captivity in 1946. His wife fled to West Germany with the children. Regina married Otto von Habsburg in 1951 .

After the Second World War , the fortress Heldburg was in the border area of ​​the GDR . From the beginning of 1948 to the end of 1949, the Heldburg District Court was located in their premises . In 1951 the castle was cleared out by Soviet troops and used as a commandant's office , after which it housed a children's home until 1982 . On April 7, 1982, a major fire severely damaged the French building and destroyed the entire interior of the living rooms and the large ballroom, which had been largely preserved until then. Building security or reconstruction was initially out of the question due to the lack of material and manpower. Instead, the building was further damaged by the weather. It was not until 1990 that the rescue of the French building began as part of a Thuringian-Bavarian cooperation with the reconstruction of the roof and the installation of new floor slabs.

On October 25, 1994, the Thuringian Palaces and Gardens Foundation took over the Veste Heldburg and continued the renovation work. The shell of the French building and the exterior facades were restored, and the two Renaissance bay windows were restored .

From 2008, the work was accelerated by ERDF funding. A good 8 million euros were available up to 2013 for the renovation with the aim of establishing the German Castle Museum . On June 2, 2009, a symbolic foundation stone with documents was embedded in the floor of the Heidenbau. In October 2010, the renovation work in the commanders' building was completed, the pillar hall and the old courtyard room were restored. Heidenbau followed in 2011, and the interior fittings in the French building were completed in 2013. In the process, preserved remains of wall frames and fragments of furnishings recovered from the fire ruins were partially re-integrated. In 2007 an exhibition was opened, which informs about the aims of the museum and offers an overview of castle research , history and typology of castles and their function in the Middle Ages and from the 17th to 19th centuries. On September 8, 2016, the German Castle Museum was opened on the Veste Heldburg and has been open to regular visitors since September 9, 2016.

View from the Henneberger Warte to the Heldburg Fortress

The original fortification from the 13th century forms the floor plan of Veste Heldburg, the outer walls of which were still in place in the 19th century and can still be seen today. Access was via the drawbridge of the first gate system into the kennel . From there you can enter the inner courtyard through another gate and a gatehouse . Horse troughs and fountain house were at this entrance. The inner courtyard is surrounded by the Heidenbau, the so-called commanders' building with the royal stables and the French building with its richly decorated bay windows and the round stair tower , the Großer Wendelstein. The two crenellated terraces on the maiden building and on the cellar vaults of the earlier kitchen building date from the 19th century.

The French building, which is clearly structured in its window axes, is considered to be the most important part of Veste Heldburg from an art-historical point of view, with the oriels dated after 1560 . The French structure also determines the character of the castle from the outside. It has a main floor with the former ducal parlors, an upper floor with the former main hall, two basement floors and a basement. In the interior, fragmentary relics of the Renaissance, Baroque and 19th century have been preserved. They were included in the room settings during the restoration, which was completed in 2013. The rooms are used for the tour of the German Castle Museum.

In the late medieval heathen building there is the former Protestant palace church from the 17th century with a gallery construction and pulpit (today an event hall), a coach house and large historical storage rooms. The plank room built in as a living space for the warehouse master has also been preserved fragmentarily.

The stables in the basement of the commandant's building, which today houses the visitor center as a so-called pillar hall. On the main floor is the former office, and above it the neo-Gothic barracks with the only historical room of the fortress that was completely spared from the 1982 fire. 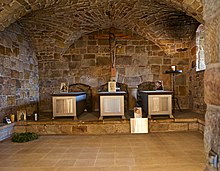 View into the crypt of the Veste Heldburg, which was restored until 2006

In 1940 Anton-Ulrich von Sachsen-Meiningen, the son of Georg III, fell. and Klara Maria, in World War II . The family set up a crypt on the fortress in the two rooms of the former silver chamber / lieutenant's room, on the right after the main gate, in which Anton Ulrich was buried. After Soviet troops moved into the castle, the sarcophagus was removed in 1951 and buried in the cemetery in Heldburg . In 1992 Anton-Ulrich's mother, Klara Maria von Sachsen-Meiningen, was buried in the same grave.

According to the family's wishes, the crypt on the fortress Heldburg was restored by 2006. The two deceased were transferred from the cemetery to the castle on February 22, 2006, and Georg III, who died in 1946 as a Soviet prisoner of war in northwestern Russia , was transferred. is planned, a sarcophagus for him has already been placed in the crypt.

On February 10, 2010 the coffin and the urn of Regina von Habsburg were also buried in this crypt, but after the death of her husband the coffin was transferred to Vienna and buried with him on July 16, 2011 in the imperial crypt . Regina's urn of the heart remained on the Veste Heldburg.

Objects of the Thuringian Palaces and Gardens Foundation